Connecting 3D printer owners across the world gives 3D Hubs access to key statistics relying on their users as sample of the larger picture.  In November, the company released their second trend report, which suggested that Open Source RepRaps, Ultimakers, and MakerBots were among the most used 3D printers in their pool. Earlier today, the self-defined “world’s largest collaborative production platform for 3D printer owners and makers” released its December trend report, outlining how the different brands are trending. 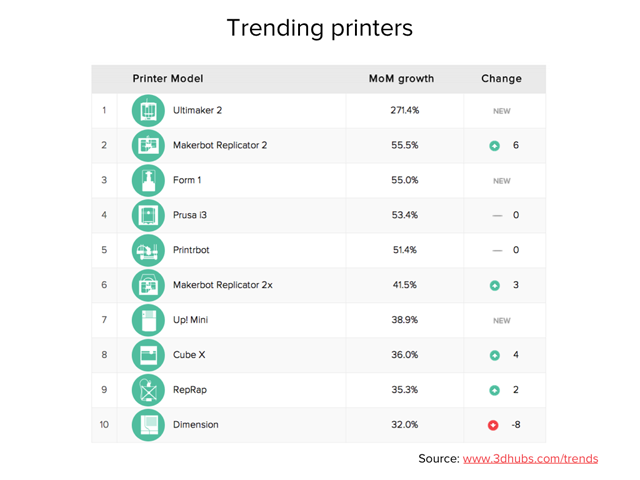 According to 3D Hubs, their research can detail “hot printers in the market right now.” Due to the commercial release of the Ultimaker 2 and the shipment of the Form1 SL printer, there is a significant increase in activity from those two machines.  3D Hubs also argues that MakerBot is gaining traction with the Replicator 2 and Replicator 2X and that “with this growth rate the Replicator is posed to overtake the Ultimaker as the most popular printer on the platform soon.”            The company, based in Europe, has a European slant, but that may change soon with the “unlocking” of a number of US cities since the opening of their offices in New York.  Still, 3D printers users show a bias towards their native machines, with the Replicator 2 more popular in North America and Ultimaker more popular in Europe.

Simultaneously more interesting and less interesting, is the distribution of colors and materials being printed through 3D printers.  The point that should be gleaned from the color distribution chart is that more colors are being increasingly offered as 3D printing becomes more popular. The colors most often used are the ol’ red, white, and blue, but the entire color spectrum is quite diverse and includes glow-in-the-dark filament, as well.  ABS and PLA are divided in terms of use, but nylon, wood, and flexible PLA is starting to be taken advantage of, too.  Again, what I think this alludes to is the increased diversity of materials out on the market.

The report offers a bit of insight into trends in 3D printing from a sample of about 2,000 users, about 2% of the total 3D printer users according to 3D Hubs.  That sample size, I think, is pretty significant and is drawn from a wide number of countries, but it may be slightly skewed demographically.  For the 3D Hubs trend report to become a truly useful statistical analysis, and not just a potentially useful marketing ploy, it would be beneficial to see things income, gender, race, and, even, political affiliation.  Is 3D Hubs made up of a bunch of middle class white dudes? Or is it a diverse community?  What are their favorite movies? Who are their favorite historical figures? God, I hope it’s not Mussolini. That guy was awful!