Brahma is, according to Wikipedia, “not to be confused with the Supreme Cosmic Spirit in Hindu Vedānta philosophy known as Brahman, which is genderless. In Hindu tradition, the creation of Vedas is credited to Brahma.” Aw shucks, just when I thought I was going to be allowed to talk about the Universe as a flow of energy that plays hide and seek with itself through us! Oh well, as the Lord of Speech and Sound and one of the Hindu gods of creation, Brahma’s good, too.  And, he’s also a line of 3D printers from India! 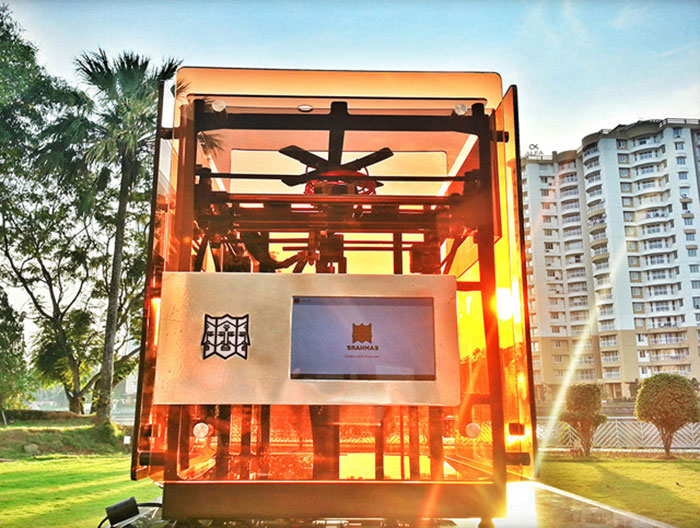 Brahma3 has recently announced its first 3D printer, the Anvil. The Brahma3 Anvil won’t start shipping until March, 2014, but it looks like a serious machine. Carrying the tagline, “Gorgeous & Powerful”, the Anvil seems to be both of those things. The Anvil has a build volume of 240 x 240 x 240 mm (about 9.4” x 9.4” x 9.4”), a layer resolution between 50 and 100 microns, and a single .4mm nozzle capable of extruding standard 3mm filaments. With its all-metal hot end and direct drive extruder, the Anvil can reach temperatures of up to 350°C. Keeping up-to-date, Brahma3 has also made the machine Wi-Fi ready and given it a 7” Android Touchscreen interface. I was wondering what purpose the flippable side panels served and was disappointed to learn that they’re merely aesthetic; you can swap them out for different colours. Still, the interchangeable panels give the Anvil a “gorgeous” aesthetic. All of these features come with a price tag of Rs 1,00,000 (about $1,610).

In addition to its formidable Anvil 3D printer, Brahma3 has initiated a “Design-in-Residence” program, which is more of a design-remotely contest. Through the program, you’re invited to submit your “world-changing ideas around 3D printing.” The Brahma3 team will work closely with 20 entrants to bring their ideas to 3D-printed life. They’ll help design each idea for 3D printing, fabricate them and send them to their respective entrants. Finally, the three “most original, genius, mad, creative, usable and inspirational ideas – will WIN a brahma3 Anvil as a reward for pushing the human race forward.”  Both an exciting contest and a great way to promote a new line of 3D printers perhaps worthy of carrying the creator god’s name.