2013 and 2014 has seen a mushrooming of the number of companies incepting the manufacture of prosumer 3D printers. Despite what some would consider an increasing rate of market saturation for the range of products compared with unit sales, most crowdfunding campaigns continue to be highly successful. It was just six weeks ago that one of the most successful funding campaigns ended, for the $299 M3D Micro, which at $3,401,361, even topped the legendary FormLabs Form1. Now, newcomer CraftBot is seeking to enter the market with its 3D printer in the seemingly lucrative and certainly popular sub-$500 market.

MakerBot, 3D Systems and Ultimaker continue to dominate the prosumer market, with industrial additive manufacturing being a class of its own, with each machine costing an order of magnitude that places the machines in a series of extant product categories outside of the strata we witness in the sub-$100,000 market. Within that sub-$100,000 market the majority of sales will most probably continue to occur in what may be termed the sub-$10,000 bands, and the low-cost $100 – $500 tier and $500 – $3000 tier in particular.

Stratasys owned MakerBot continues to dominate the $500 – $3000 tier of machines that are geared towards designers, education, low-batch middle-quality professional prototyping, makers and hobbyists with an average-to-high income. Ultimaker also fares very well in this tier, the company has been consistent in the quality of their 3D printer products and are the current number one in European sales, pitching at the same audience as MakerBot. 3D Systems continuse to also perform well with their Cube range of desktop 3D printers, which encompass the hobbyist for the lower cost units, designers and low-batch middle-quality professional prototyping for the higher cost products. 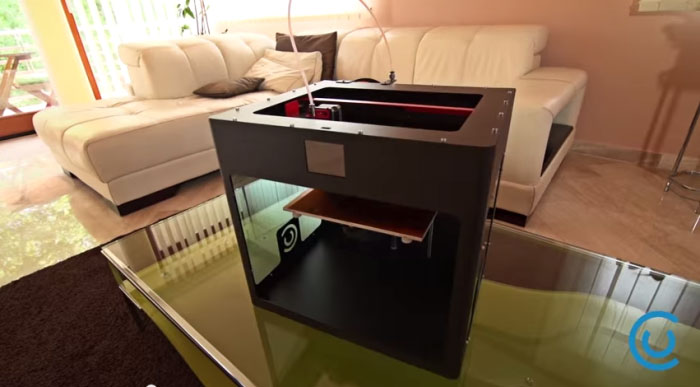 The $347 Pirate3D Buccaneer sparked great interest with a strong marketing campaign that oriented around guessing the mystery low price for the printer, then, later, controversy regarding some specifications, which were deemed by some customers to have been withheld. These waves of interest ultimately resulted in $1,438,765 and 3,520 backers when Kickstarter funding was met on the 26th June 2013. The campaign was also widely covered in the media which likely went some way to supporting its success.

The $299 RigidBot fulfilled a low-cost high-build area niche with it’s 10″ x 10″ x 10″ output, which earned the team behind the Kickstarter crowdfunding campaign $1,092,098 and 1,952 backers in 2013. The $499 Printrbot, a brand that has gone on to become an established favourite that continues to be held in high regard by users gained a crowdfunding total of $830,827 and 1,808 backers at the start of the mushrooming of Fused Deposition Modeling printers in 2011. 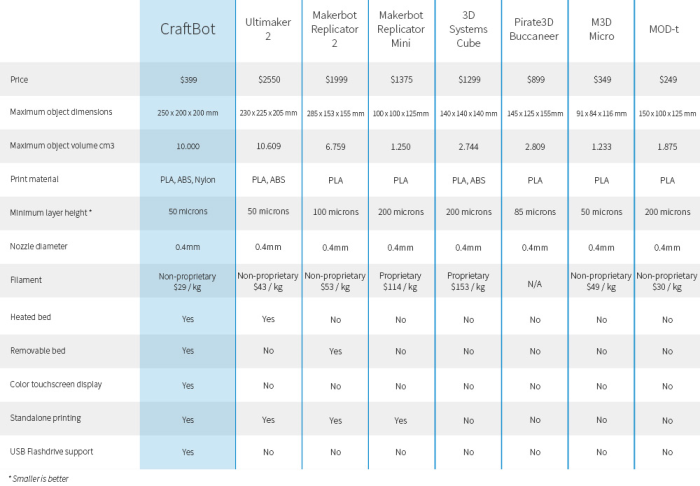 Amidst all this success – and there are at least four times this number of 3D printers now retailing under $500 including DIY kits – the CraftBot has some serious competition. But it is that competition that the team behind this printer has been keen to note. Both to take notes from regarding popular specifications and standout features, and to position their product wisely.

The CraftUnique CraftBot desktop 3D printer ticks the box for just edging into this popular price range at $496 – $499. Indeed that there are a range of perk prices merely a dollar apart suggests that the team behind this project very much has this price mark in mind for the RRP. An alternative factor is that the only variable that distinguishes the perk prices is which batch that your printer will be manufactured in, and therefore how soon you will receive your machine.

The CraftBot ticks another important box, especially for a box shaped printer: The build size is larger than the now cliched standard of 6″ x 6″ x 6″. This, I would anticipate, will create significant added value in the eyes of potential customers. There is a lot of difference between having a 15cm cube as the maximum output for a 3D printer and the size that this printer can produce at 10″ x 10″ x 8″. Also worth noting is the 50 micron layer resolution. This puts the detailing alongside some of the more expensive popular printers such as the MakerBot Replicator 2 and Ultimaker 2. Will output prints be at the same level of quality? Probably not, but they will be closer than most printers under the $1000 mark compare.

You can find the CraftUnique CraftBot 3D printer Indiegogo crowdfunding campaign here. The video is informative regarding the printer’s features, and what motivated the team to chose them. It’s worth a watch, as is this 3D printer, which tipped its funding goal in just 24 hours.