“When looking at the $90B+ global market for manufacturing technology products, less than $1B of that is currently being derived from 3D Metal Printers,” says David Burns, former CEO of ExOne and 3D Metal Printing authority while speaking to an audience of engineers. “Within five years, there could be demand for as much as $10B of these machines, and the question is: What company is going to deliver a technology that widens the audience?”

3D Metal Printing sounds like a new and disruptive technology, but has actually been around since the 1970’s. The prevailing 3D Metal Printing technology – known to the engineering inner circle as Powder Bed Fusion (PBF) – is growing slowly, due to a variety of factors.

PBF machines often cost $1 million each and utilize a specialized printing input – sphericalized powdered metal. Combining the high cost of these perfectly spherical bits of metal inputs along with the elite entry price, the current market for 3D Metal Printing has developed slowly.

“It is no secret that PBF is expensive and slow, which may significantly limit its market potential,” says Zack Vader, Chief Innovation Office and Co-Founder of Vader Systems. “We looked at what is out there and felt of those critical limitations, the most important one to address was cost. If you look at the metal parts currently being 3D printed, they are reserved to the most high-end industries within manufacturing. To create a printer that could change the industrial landscape, we knew the task was to dramatically increase access through lowering machine and per pound printing cost.” 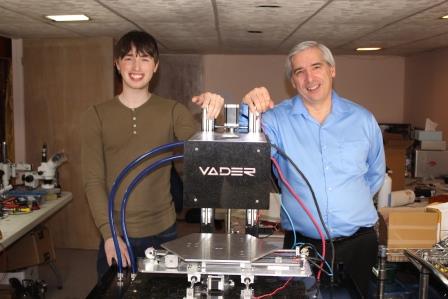 With this in mind, Zack and his co-founder, Scott Vader, tested hundreds of potential metal printing designs. “We went down many roads in that first 12 months, but kept coming back to our unique application of magnetohydrodynamics (now coined as MagnetoJet and patent pending). To make a part as sound and as dense as machined or cast metal, we knew we would have to deliver from a liquid form… The challenge there was figuring out how to control molten liquid metal at 1400 Degrees Fahrenheit. Once printing through liquid form was accepted as the only way forward, there was no question that the optimal way to move molten metal was through magnetism.”

Three years after setting out to create a 3D Metal Printer for the industrial market, Vader is currently building their first commercial machine, The Mk1, that will be complete in August and printing on display at IMTS in Chicago (September 12th – 17th, 2016). The machine will be on display in the newly formed and distinctive IMTS Additive Manufacturing Pavilion.

Some significant organizations have taken notice… among them, a leading defense contractor, who found Vader early on and has established a long term business agreement. With several early adopter partners engaged, Vader is on the verge of delivering a machine that will 3D print metal like never before. “Our clean sheet approach to metal 3D printing for manufacturing worked even better than we’d hoped. We are already exceeding our internal goal of 1 lb. per hour aluminum deposition rate with a machine that costs roughly 1/3 of legacy PBF printers,” says Scott Vader, CoFounder and CEO.

With Vader’s $400,000 Mk1 price point, and by reducing per pound printing costs by 90% vs PBF, the goal of increasing access has been achieved. Beyond cutting the price of admission to 3D Metal Printing, the Mk1 is challenging convention with strong, dense parts and faster throughput. “We aimed to win on total cost and it turns out that we will win on deposition speed as well.” Challenging convention and innovating a completely new path forward, Vader could have just the right solution at just the right time.