Ultrafine Particles and the Potential Risks of Printing without Ventilation

Before anyone tells you that 3D printing will kill you and says, “First the guns! And now this?!”, remember: everything is dangerous. It’s true. Even if you point a kitten at someone in the wrong way, you’re liable to take their eye out. Well, according to one study at ScienceDirect, it turns out that 3D printing is no different. Just keep in mind that the results are, not only very preliminary, but also not super scary, either. 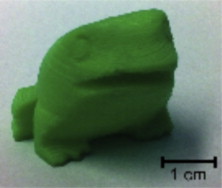 Wary of the effects of ultrafine particles (UFPs)[1], a group of scientists from the Illinois Institute of Technology and the National Institute of Applied Sciences in Lyon, France conducted an experiment at “a 45 m3 furnished and conditioned office space belonging to a company who specializes in 3D printer education, training, and sales for the general public”. Using a machine[2] that measures the amount of UFPs in the air, the researchers were able to test whether or not desktop 3D printers emit a significant amount of microscopic pollutants. First, they measured the atmosphere of a closed room to establish a UFP baseline. Then, they ran two desktop 3D printers that each printed a single PLA object. After that, the same two machines were run again along with an additional three printers that manufactured the objects in ABS. In case you’re curious, the model they printed was a little green frog (except one PLA machine, which printed a a chain link for some reason).

The results of this small study demonstrated that the printers did emit a significant enough amount of UFPs to classify them as “high emitters” of UFPs.  The pair of PLA printers released between 1 – 4 times the amount of base UFPs found in the room when no 3D printers were running and all five printers, PLA and ABS working simultaneously, released between 9 and 56 times the baseline at given times.  And the particles are small, which means that people nearby can inhale them, possibly leading to a variety of problems, according to the authors:

Surprisingly, grouped alongside 3D printers in terms of UFP output, according to the study, are cooking appliances:

Buonanno et al. (2009) reported total UFP emission rates over the same size range as ours measured during various cooking activities. For comparison, our estimate of the total UFP emission rate for a single PLA-based 3D printer (1.9–2.0 × 1010 # min−1) was similar to that reported during cooking with an electric frying pan (1.1–2.7 × 1010 # min−1). The same 3D printer utilizing a higher temperature ABS feedstock had an emission rate estimate (1.8–2.0 × 1011 # min−1) similar to that reported during grilling food on gas or electric stoves at low power (1.2–2.9 × 1011 # min−1), but approximately an order of magnitude lower than gas or electric stoves operating at high power (1.2–3.4 × 1012 # min−1). Regardless, the desktop 3D printers measured herein can all be classified as “high emitters” with UFP emission rates greater than 1010 particles per min, according to criteria set forth inHe et al. (2007).

Unlike electric frying pans and stoves, however, the plastic particles may be more dangerous than those emitted by cooking appliances. The authors cite previous studies that indicate the dangers of inhaling ABS.  At the same time, their own study does not measure the toxicity of the UFPs produced by the 3D printing process and the author’s also note that PLA may not be toxic at all:

One important limitation to this study is that we have no information about the chemical constituents of the UFPs emitted from either type of 3D printer, although condensation of synthetic organic vapors from the thermoplastic feedstocks are likely a large contributor (Morawska et al., 2009). In addition to large differences in emission rates observed between PLA- and ABS-based 3D printers, there may also be differences in toxicity because of differences in chemical composition. As mentioned, thermal decomposition products from ABS have been shown to have toxic effects (Zitting and Savolainen, 1980 and Schaper et al., 1994); however, PLA is known for its biocompatibility and PLA nanoparticles are widely used in drug delivery (Anderson and Shive, 1997 and Hans and Lowman, 2002).

So, what’s it all mean? Well, the authors admit that a good deal of studies need to be done to obtain a broader range of data. For individual hobbyists, there’s one important thing to take away from this extremely preliminary study: 3D printing in one’s home may have some risks, just as woodworking and soldering in one’s garage might. In other words, open a window and keep the area ventilated. For 3D printer retailers and manufacturers that may be running multiple machines simultaneously, it may be important to be on the lookout for future research and regulations regarding UFPs and the need for ventilation is doubly important. And, finally, for engineers and Makers out there, it’d be really sweet if you could make a Filabot-type contraption that captures the particles before they’re released into the air and recombines them into useable filament.  Or, at the very least, a built-in exhaust system.

Feature Image Source: An interesting article from Science Daily regarding the measurement of ultrafine particles.

[1] According to Wikipedia: “Ultrafine particles (UFPs) are particulate matter of nanoscale size (less than 100 nanometres in diameter). Regulations do not exist for this size class of ambient air pollution particles, which are far smaller than the regulated PM10 and PM2.5 particle classes and are believed to have several more aggressive health implications than those classes of larger particulates.”