TU Delft Students Build a 3D Bioprinter Out of K'NEX

Back in my younger days as curious child, I recall an experience where my brother and I built an amusement park out of K’NEX, one of the world’s most popular and creative construction toys available. I still remember the awe felt watching thousands of tiny parts come together to create a functioning Ferris wheel and roller coaster, wondering to myself ‘what else could possibly be constructed with these materials?’ Well the TU Delft team, composed of students from the Netherlands-based Delft University of Technology, has answered that question in an unimaginable way! This team of students has constructed a 3D bioprinter entirely from K’NEX, capable of printing biofilm quickly and reliably.

TU Delft turned to K’NEX after realizing that purchasing a 3D printer able to construct biofilm, a group of microorganisms with cells that are stuck to one another, was well out of their budget. One of the members thought of building a K’NEX model, while the team was trying to think of other options to print their own biofilms into hydrogel. Realizing that the K’NEX construct might actually work, the team focused on making the 3D printer capable of speedy and quickly reproducible biofilm. 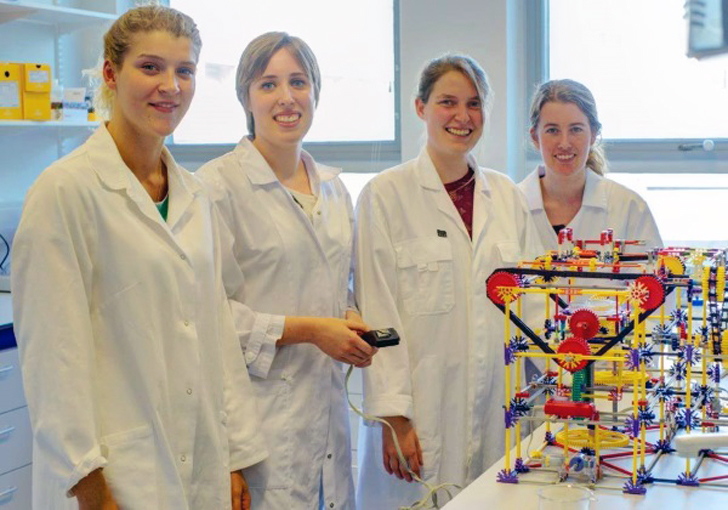 The team produced the microfilm material using bacterial nanowires,  very thin electrically conductive connections created by various bacteria that make it possible to make “pretty” biofilm. TU Delft can now print layers of bacteria into hydrogel (bio-ink), showing promising potential for the application of their 3D printer in industrial and medical research, both of which have a keen interest in learning to control biofilms.

The team is now ready to show the world what they’ve built out of K’NEX (which I admit, is much more innovative then my Ferris wheel…), and will travel to Boston this weekend to present their biofilm 3D printer at the iGEM competition, which is the largest synthetic biology competition available for students around the globe. The competition has over 200 teams competing in this scientific challenge, but the TU Delft team certainly has a good chance at standing out among the other contestants. They’ve not only produced a unique form of biofilm through 3D printing, but have also manufactured this innovative printer themselves out of a children’s toy meant to bring out the most in imagination.

With the ability to print layers of bacteria through their K’NEX 3D printer, the Delft team proved their success by 3D printing their iGEM team logo with their very own bio-ink on their very own K’NEX 3D printer. TU Delft has taken imagination to a whole new level, and will likely inspire many other students in Boston and beyond to take a nostalgic look at what can be done with a little imagination and a building kit of K’NEX.