Tinkercad, the company working hard to bring accessible 3D data creation to the masses, has just announced “some weekend fun” in that it is now possible to write Shape Scripts directly inside the Tinkercad editor and create shapes that are generated programmatically. According to the release, while the scripts are written in the editor the actual scripts are executed by the distributed Gen6 geometry kernel running on the Tinkercad server cluster and Tinkercad believes that this is cloud computing at its best — harnessing great power through an extremely easy to use browser interface.

As they say: “When we started working on Tinkercad one of the earliest feature requests was to let users create scripts to augment the editor. A key concern for us has always been ease of use. We wanted the API to be extremely accessible to everyone interested. That’s why we choose Javascript as the scripting language; it is a widely known language that is familiar to pretty much every web developer. We also felt that it was extremely important that users writing scripts could do it directly within Tinkercad and transparently harness the computational power of our dedicated cluster.”

This is an open invitation for everyone to learn more about the Tinkercad Gen6 geometry kernel. It is a revolutionary kernel in a world where most CAD systems are moving towards utilizing half a dozen cores. Gen6 has been designed from the ground up to be able to effectively distribute single model rebuild operations across tens of thousands of CPU cores.

“We firmly believe this is where the world of CAD is heading and we are happy to be leading the charge.”

The invitation is live now, for anyone that wants to get started immediately at the developer portal.

If you go ahead and 3D print your designs from this – do let us know here at 3DPI and send us some pics, we love sharing. 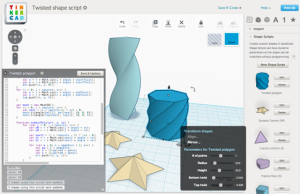