Smartphone 3D printers are real, I can attest to that. I had an opportunity to see a rough prototype of one up close at Professor Jeng Ywam Jeng’s Taiwan Tech lab in Taiwan. Solido3D, however, could actually bring this technology out of the lab and put it into the hands of consumers worldwide with their OLO smartphone 3D printer. And they’re going to do it soon, in fact. Solido3D is currently prepping for the launch of what is sure to be a pretty massive Kickstarter campaign. When it goes live next Monday, March 21, the crowdfunding initiative is likely to go down in Kickstarter history. Not just because of the power of OLO itself, but because of the 3D printing materials that it will be bringing with it. 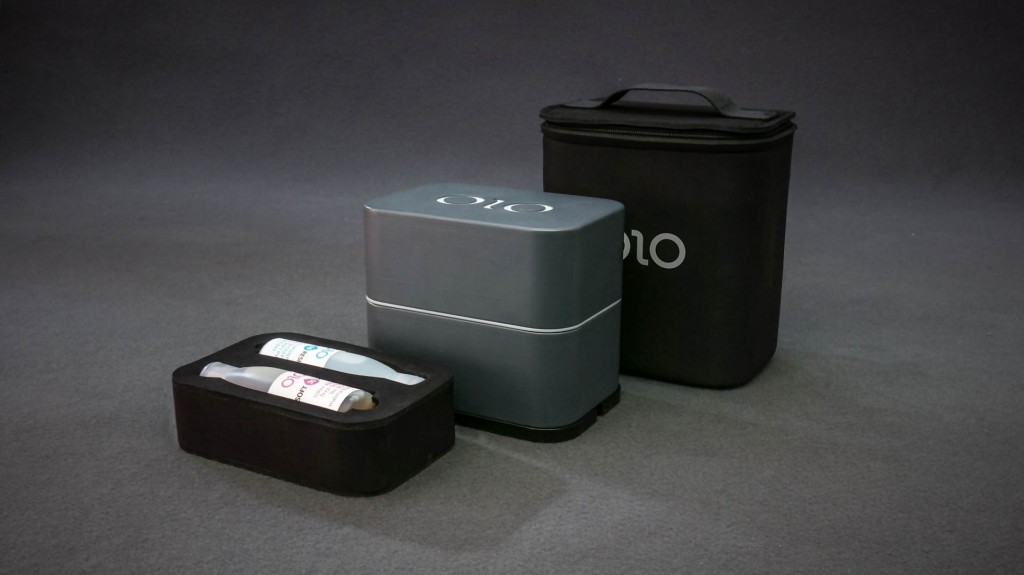 As we reported last fall, OLO is a fascinating device that uses the light from a smartphone to cure specialty resin material layer by layer. Users simply place their phones into the base of the OLO 3D printer, which then raises the z-axis as each layer of the object is hardened. Think of it as a DLP 3D printer – like the Autodesk Ember – except that it uses hardware that one-third of the people on the planet already carry around in their pockets.

Since our initial coverage, I’ve been able to speak to the developers of OLO. Filippo Moroni and Pietro Gabriele, who now have an office in their native Italy and a beautiful space in San Francisco, were able to tell me about how the technology works in greater depth. The co-founders confirm that one important component is the resin, which is hardened by perfectly normal, visible light. So, using a smartphone app, a 3D model is sliced, with each slice acting as a mask, projecting light onto the resin vat from below.

When I originally wrote about OLO in 2015, the team was prepping for the debut of their crowdfunding campaign sometime in October or November. The launch was delayed a bit, however, because, according to Filippo and Pietro, they wanted to make sure that their product was as polished as possible. More importantly, Filippo and Pietro say that they have made important partnerships that has made the product exponentially more powerful.

Initially, Solido3D had been able to concoct a white light-curing resin, with one partner, in the past. But, after the public announcement of the OLO 3D printer, they were approached by another established, yet unnamed chemical company, that had been developing an entire suite of visible light photopolymers for a completely different application. Together with this materials expert, the OLO team has been able to develop not one, but five different types of resins that can be cured by visible light. 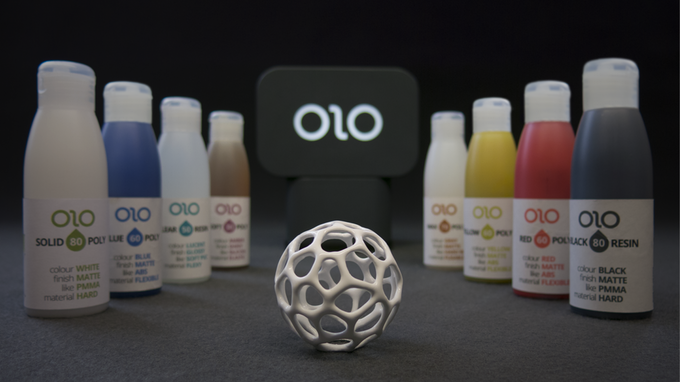 Upon launch, the OLO will be able to 3D print using their RAINBOW-SET of glossy white, yellow, blue, and red standard resins, which Filippo and Pietro say can be mixed together to form new colors. These materials are capable of producing medium-strength objects, ideal for design and the arts. In addition to those, however, they’ve created their SOFT MILKY GLOSSY resin for silicon-like, flexible parts; as well as their PMMA-like TRANSLUCENT MATT AMBER resin; a hard, wax-like CASTABLE GREY MATT material for micro fusion; and a HARD WHITE OPAQUE ABS-style resin. This materials portfolio demonstrates that, not only does OLO democratize 3D printing like nothing before, but it also competes with many of the standard DLP and SLA printer manufacturers on the market. 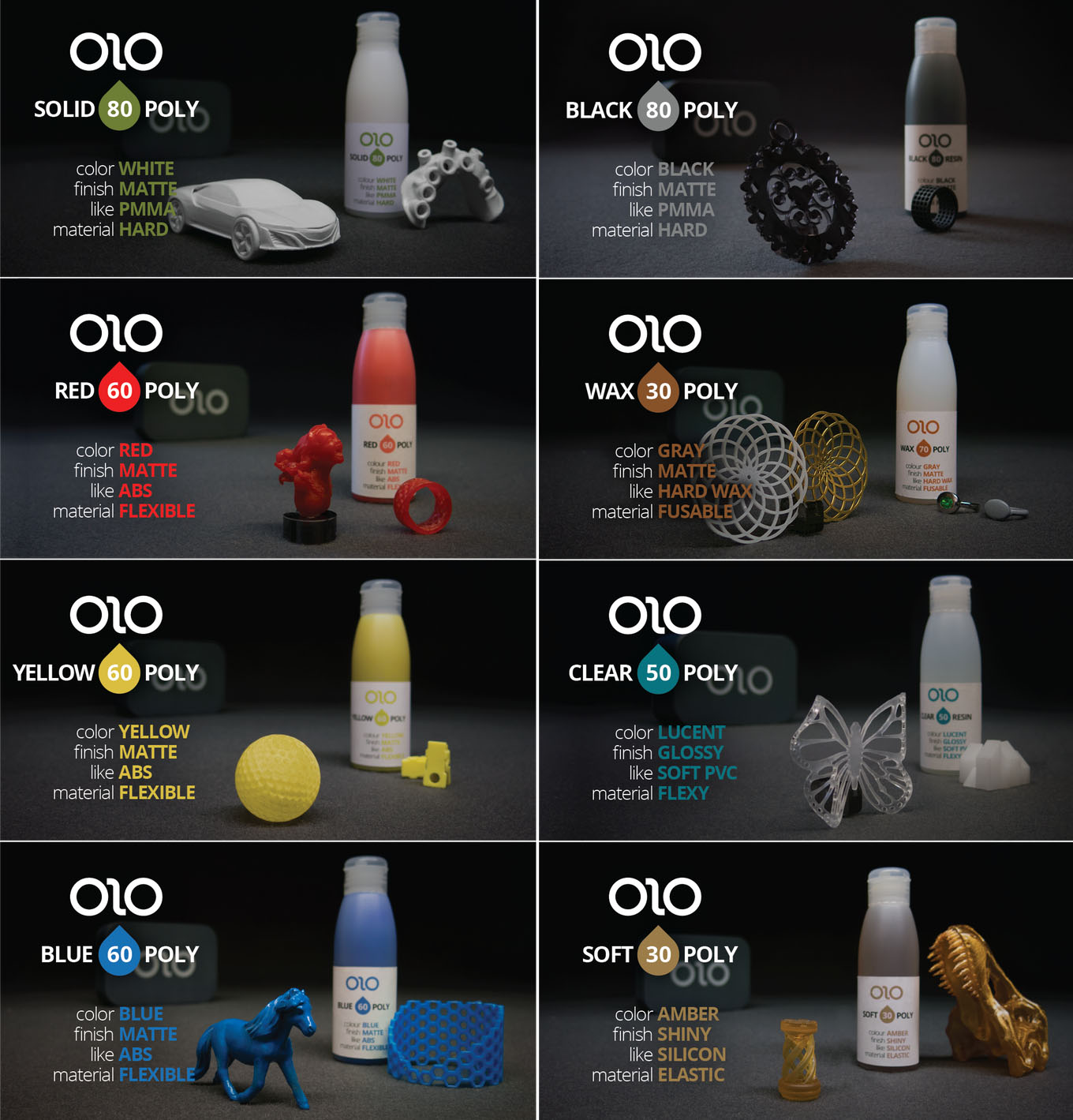 In addition to a developing a complete suite of materials, the OLO founders tell me that they have solved the issue of print adhesion, which can sometimes affect DLP technologies. As I learned with Taiwan Tech’s phone printer and WASP’s DLP machine, prints can sometimes stick too well to the print bed, making them difficult to remove without breaking. For instance, DLP machines might have a success rate of around 70 to 80%, but Solido3D’s method uses a 150-micron-thick elastic film that they say allows for print removal with nothing but warm water.

With this technology, the OLO printer has been designed to work with any number of mobile devices, including iOS smartphones like the iPhone 6 Plus, as well as Android and Windows phones up to 5.5 inches in size. The build chamber of the device is 128mm (X) x 72mm (Y) x 52mm (Z), giving the OLO a compact volume in which to print objects with details as fine as 0.042 mm on the X/Y axes and .05 mm on the Z-axis. And, because Solido3D has a strong manufacturing background, in addition to the exhibited R&D expertise, the firm should be able to produce OLO and deliver it to backers without a hitch.

A smartphone 3D printer is an inherently appealing thing, exemplified by the fact that the OLO won of the Editor’s Choice Award at Maker Faire New York. But, on top of this intrinsic wow factor, the team behind it understands the democratizing effect their printer could have for the 2 billion smartphone users around the globe. Because of the variety of materials they will be releasing, the OLO will be capable of 3D printing practical, functional objects like castable prints for the dental and jewelry markets. And, by making OLO easy to use for non-expert end-users and giving the printer an ultra-low $99 price point, almost anyone should be able to afford and use it.

Solido3D will be demonstrating this fact by giving away OLO 3D printers to all 100 individuals who participated in their recent contest. The community was invited to snap pictures of what they would print with OLO and sharing the photos on Instagram. Initially planning to draw winners out of a hat, Pietro and Filippo instead realized that the machine was so inexpensive to produce that they could give it away to all 100 entrants.

This democratizing effect will both create a whole new audience of 3D printer users and it will completely disrupt existing markets for DLP machines, with industrial models costing in the tens of thousands of dollars. And, because these companies rely on their materials to sell high-cost systems, OLO can shake things up on the materials front as well. Just as the computer has shrunken down from the room-sized systems of the mid-20th century, 3D printers are dropping in cost at a ridiculous rate, in this case, thanks to the shrinking of computers. So, OLO may disrupt the market for high-cost 3D printers, but it will also potentially spread 3D printing across the world. 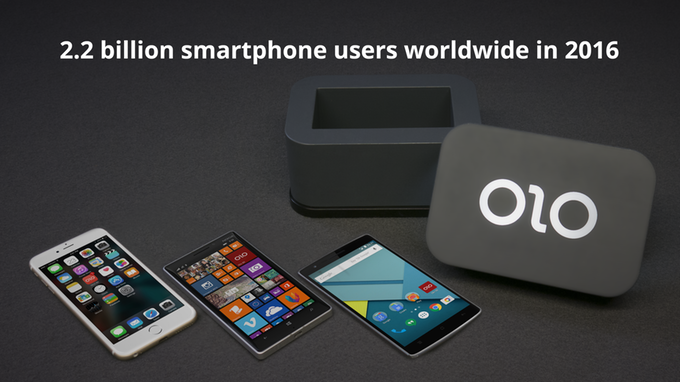 Last night, I was going to bed, wondering about these smartphone 3D printers, envisioning their use with VR headsets and smartphone-powered 3D scanners. I pictured a future in which people would scan 3D objects with a device like the Structure Sensor from Occipital, then slip their smartphone into a Google-Cardboard style headset, where they would model and prep the object for printing using gesture control, before finally placing the phone into an OLO-type printer for 3D printing. Of course, all of these technologies still have a ways to go and, in the future, we won’t want to use the same individual, smartphone for all tasks. But such a low-cost machine as that presented by OLO could change just about everything.