Tend.ai can train robots on a small business budget

There is one major sticking point with using 3D printers for any form of mass manufacturing, especially in a smaller factory: you still need people to keep them going. Tend.ai has potentially solved the issue with collaborative robots you can train.

Big businesses already have robots managing their production line, but smaller business with a collection of 3D printers running at the same time can hit trouble fast. Co-founder of Tend.ai, Mark Silliman, spotted a gap in the market when a friend tried to run a small-scale production facility and had to constantly tend the machines.

Removing prints, packaging products and more all require a human touch and that is a big obstacle when it comes to running any kind of manufacturing business.

It isn’t just 3D printers either. Small-scale factories can now incorporate all kinds of machines that are capable of basic automation, but there are simple tasks that we just have to take control of.

Silliman was at a loose end after his company, Smartwaiver, was acquired. Fellow co-founder James Gentes had sold his analytics company, The Social Business, and backend engineer Robert Kieffer and his team at Zenbe had sold out to Facebook in 2010. So he took on the challenge of turning an industrial robot into a mass manufacturing multi-tool.

There are advanced systems that cost tens of thousands of dollars, but Silliman realised this was beyond the means of small business. So he devised a Cloud-based system linked to a webcam that allows people to literally train their robots in the most basic way.

“We basically spun up this system that moves all this data to the cloud,” said Silliman. “Now you can use a $100 webcam to do OCR and the whole nine yards, AI and machine learning, without having any of these resources in-house. You can do it without modifying the machines or voiding their warranties.

“Users never write code. They literally take the robot and pull it around by hand. These are collaborative robots, you can touch them and train them with simple instructions like: ‘This is where the buttons are, this is where the screen is.’”

The system uses a small and simple computer that passes data from the robot to the webcam that is attached to the robot’s arm. The configuration data isn’t stored on a physical hard drive, it’s hosted on the Cloud and that makes it even simpler and cheaper. 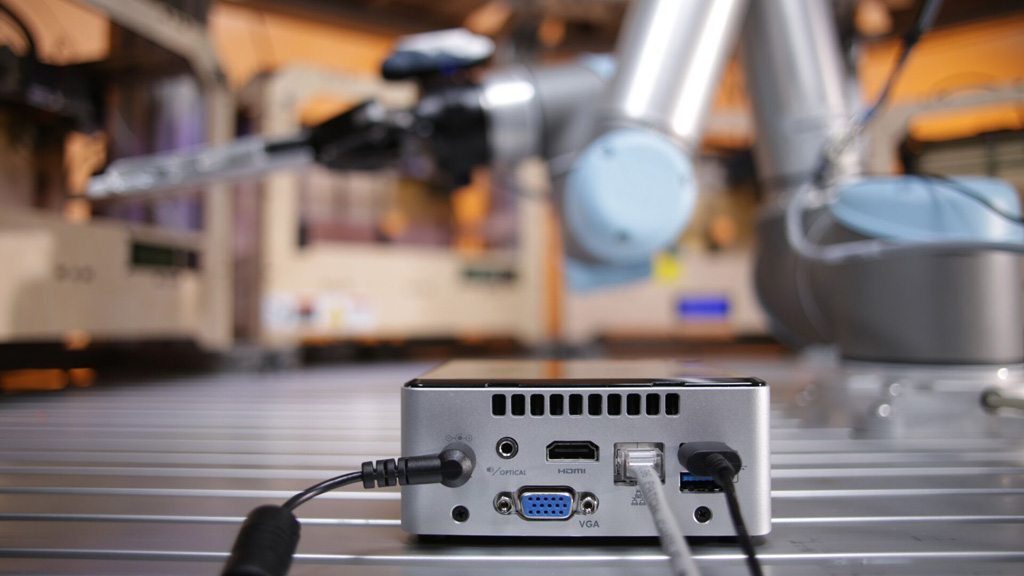 The company wants to offer a vast array of programs, too, so the basic training for most commonly used 3D printers will be available to download. The program will effectively incorporate each user’s data, too. Tend.ai could have a whole range of set-ups before long, so this Software as a Service (SaaS) business could offer off the shelf robotics kit that is simply plugs and play.

We really could have our own microfactories running 24/7 without human intervention. That’s the dream in any case.

As an example, a 3D printer could flash up a message that a job is complete on the touchscreen. You can teach your robot to recognise the signal, open the cutter, remove the piece, replace it with a new item and start the next job. It can also stop the presses if something is wrong.

The IoT could ruin this party

Of course the Internet of Things might crash this party, but Silliman believes there’s a solid gap in the market for this software and that every machine doesn’t have to be networked. “I would love all machines to be connected, but the truth is that people work with machines for 20-30 years and waiting around for the IoT dream just isn’t always possible,” said Silliman.

Tend.ai will go live in July with 10-20 customers as part of a beta test. If that goes well then the company will seek further funding for the R&D and staff hires it will need to turn this vision into a reality.

Time will tell if this is the future of microfactories, but we like the concept and we hope it works on some level.