Yesterday Stratasys announced record financial results for the first quarter of 2013 based on a number of factors, not least strong sales following the merger of Stratasys and Objet at the very beginning of the year. The share price has gone up as a result in the 24 hours since. A couple of other notable points to take from the overview provided by Stratasys yesterday is its continuing investment in R&D — $10.8 million during the first quarter, which represents 11% of sales. They’ve always been good at that! The second nice figure is the number of 3D printer systems that the company has shipped, across all its ranges, which is just shy of 40,000. Considering they are largely industrial focused machines, this is not insignificant. Although I was talking to someone yesterday that indicated to me that Stratasys is now critically thinking beyond ‘industrial only’!

Today’s news from Stratasys, however, is more functional and concerns the immediate availability of a new material for the 3D printing of dental and orthodontics models. The new material, VeroDentPlus MED690, expands Stratasys’ growing family of dental materials, offering increased accuracy, dimensional stability and high resolution. 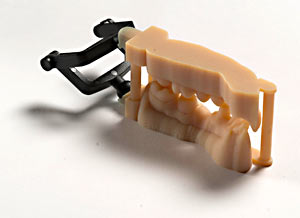 “The dental market requires the highest standard in precision and appearance of 3D printed stone models,” said Avi Cohen, director of global dental at Stratasys. “The introduction of VeroDentPlus MED690 is part of our continuing commitment to setting that standard.”

The VeroDentPlus MED690 is optimized for printing models for crowns, bridges, implants and orthodontic appliances. The modelling data can be obtained from any intra-oral, impression or plaster scanner and then 3D printed with fine 16-micron layers on the Stratasys Objet EdenV line of 3D Printers.