Israel is a land of opportunity for many companies, especially in the IT sector. The Tel Aviv skyline is almost unrecognizable since the last time I was here, only four years ago, and trains have Wi-Fi. Innovation here is moving fast. The next successful start-up could be anywhere, and the enthusiasm around 3D printing is tangible.

One of the reasons for that may be that one of the biggest success stories in 3D printing is right here, in Rehovot, about a half hour south of Tel Aviv. Objet, the company that merged with Stratasys just about two years ago, to become the largest global manufacturer of 3D printers, originated here and became one of the two Stratasys headquarters (the other is in the US). Stratasys has since been growing at a 25-30% rate and is not stopping. Over the past few years it has acquired MakerBot, Solid Concepts and Harvest Technologies, GrabCAD, and is on course to become the first one billion dollar 3D printing company by as early as next year.

To sustain and fuel this growth, Stratasys has built a new, huge, facility in Kyriat Gat, where Intel also has manufacturing plants. As Michael explained last October, the factory is meant to meet growing demand for PolyJet 3D printing. It currently houses both the assembly area for all Objet series 3D printers and for the resin materials to ‘feed’ them. From the sheer size of it, as seen from the outside, Stratasys is either expecting enormous growth in this field or is going to integrate assembly lines for other products as well.

This is just the factory. All Research & Development on materials and technologies continues to be carried out at the Rehovot headquarters, as are all other commercial and marketing related operations. That building, also very large, is rapidly becoming too small for the new departments and personnel that Stratasys has been integrating. Right across the street a new five story building is being built. There are no official confirmations, and it is just the skeleton of a building at this point, but parts of the exterior cladding are somewhat reminiscent of Stratasys’ style. 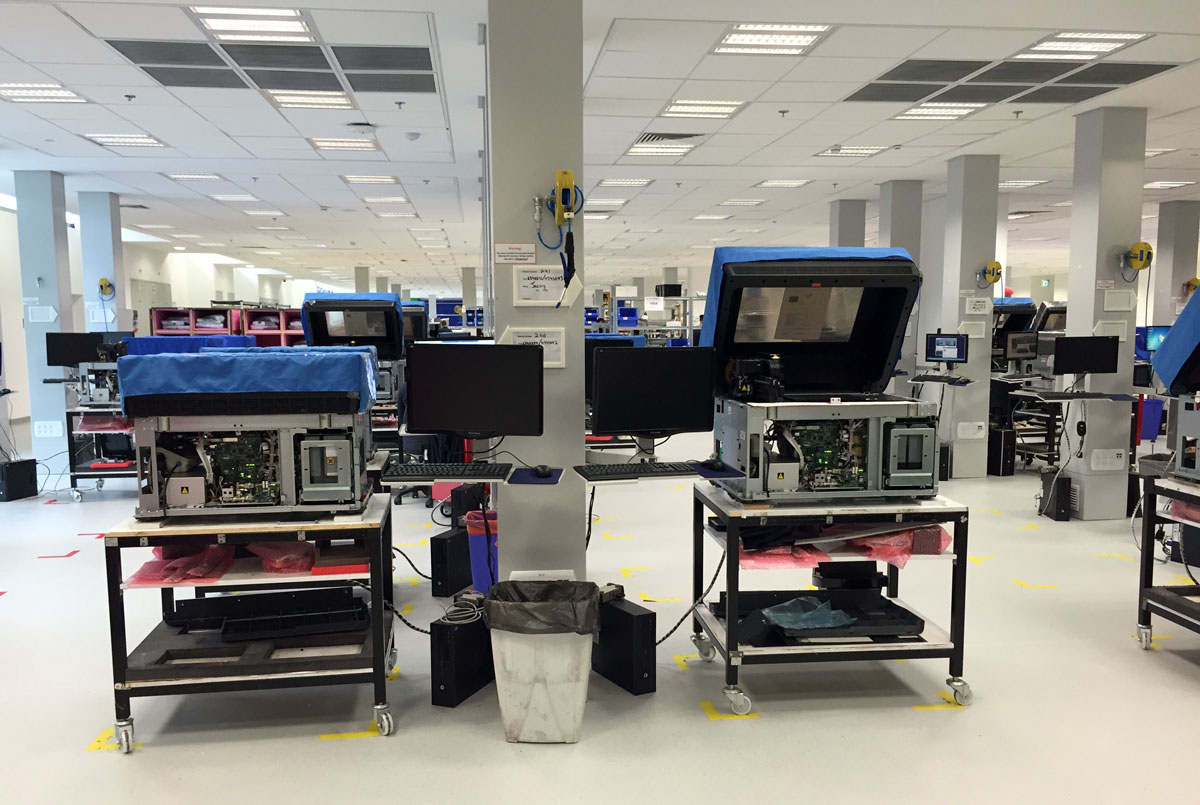 After a few recommendations about not taking unauthorized photos and not deviating from the righteous path I was to be guided along during my visit, we enter Stratasys’ 3D world and I immediately want to take a photo. What I see in front of me is a huge space full of large 3D printers and components. I am allowed to take a photo of the room but not one that could reveal too much about the exact number of machines. Its actual manufacturing capabilities comes under delicate information that could impact the company’s market value.

All together I would guess that there are at least 30 to 50 machines being worked on in an open space that measures around 15,000 square meters. The area is divided into many sections. One is for the Objet 500 and Objet 350 class systems and another is for the Eden 260, with the numbers representing the width of the build tray. Another area is for the smaller desktop systems, the Objet 24 and Objet 30. The machines are also defined by the number of different materials they can work with (up to three plus the support material) and by the colors they can use. Most systems can be upgraded to the next level. In some cases it is just a matter of software and easily replaceable parts, for others the upgrade is more complex but it is always something that Stratasys wants to offer its customers.

My tour begins from the point where the machine’s components are delivered. Stratasys’ operations managers pay attention to every detail in order to guarantee their customers the best possible quality standards. This is something that is recurrent in every single step of the machine’s assembly and quality control (QC), to the point where it is almost maniacal. 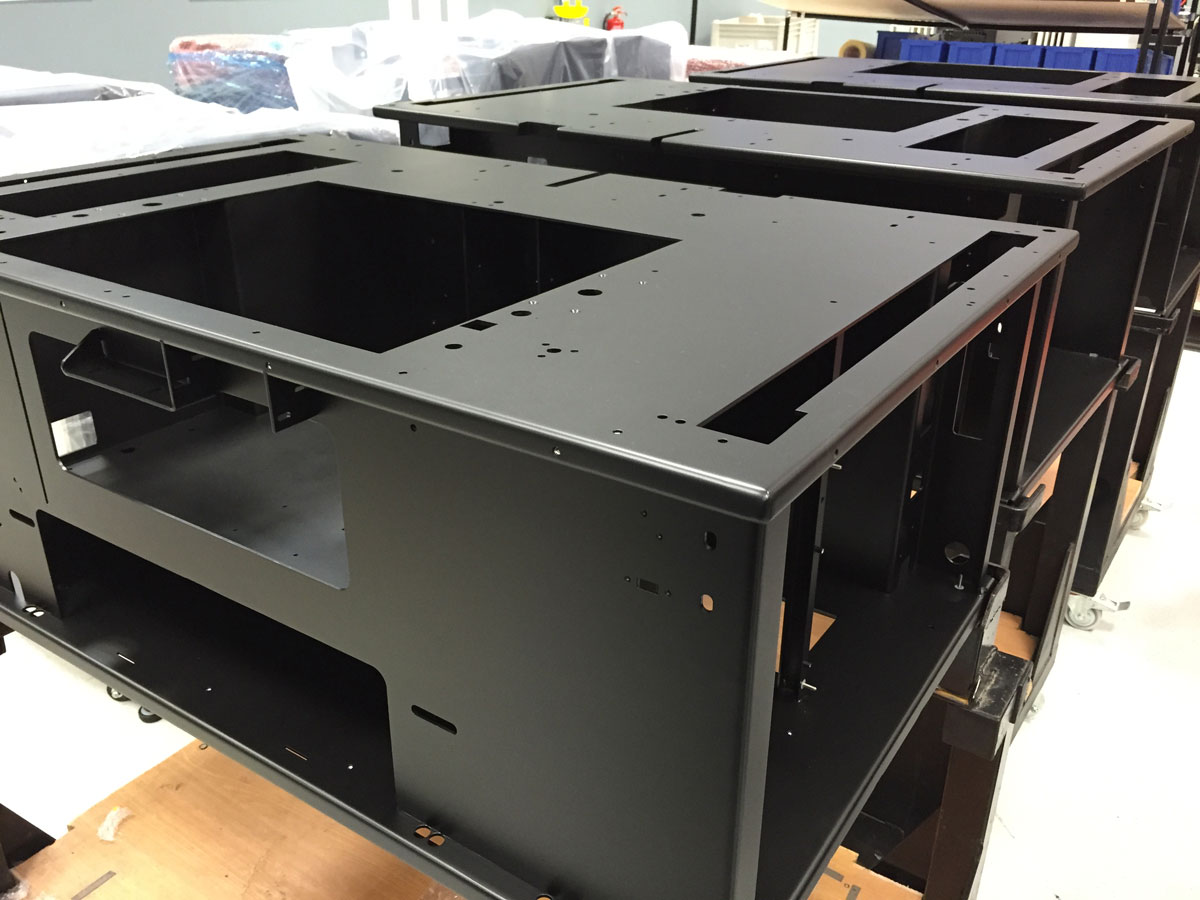 Other than that, the factory looks somewhat like that of other smaller 3D printing manufacturers I have visited, only elevated to the highest power. Just like other 3D printers, even an Object500 Connex3 is made up of basic components: a metal chassis, a side and a top cover, various electronic boards and cables, a large X axis arm, a multi-wavelength light source and a very large print head. This is the heart of PolyJet technology and it is where all the magic happens.

As Guy Menchick, Stratasys VP of Incubation Labs patiently explained to me when I visited the R&D department, each large nozzle contains as many as 8 printheads and each one of these has tens of smaller nozzles. A PolyJet printhead has as many as 900 nozzles sometimes more. Each nozzle releases a droplet measuring only a few picoliters of material, which is immediately cured by the light source. The electronics can tell the printhead to regulate the type and exact amount of each material released with the highest accuracy. 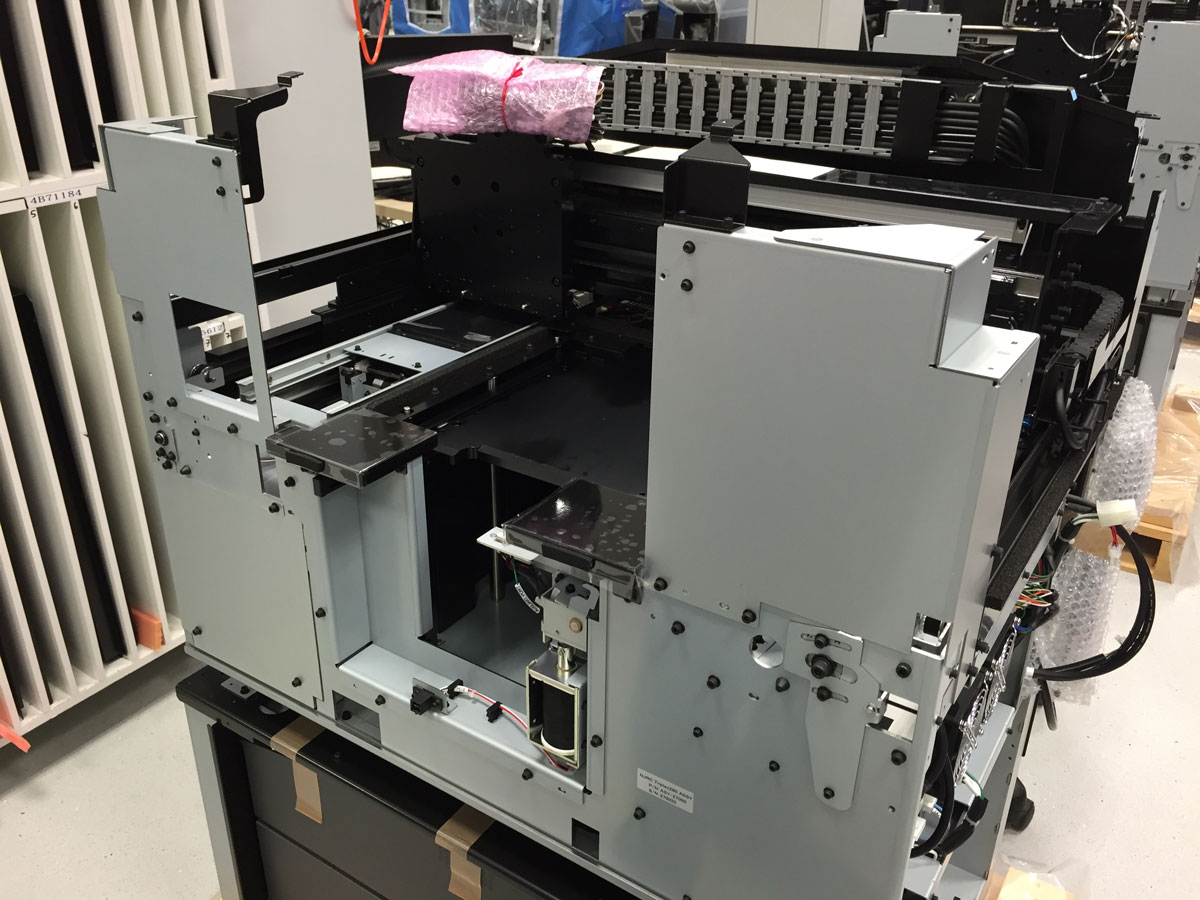 Stratasys PolyJet materials are entirely resin based. There is no wax involved and this means it is more precise but also that it requires a light source covering a broader range of wavelengths to cure it efficiently. The coolest part is that the technology can be easily scaled. This means that to make it ten times faster, all Stratasys needs to do is make the printhead ten times larger. “Polyjet is the most scalable technology there is,” Menchick told me, “it is only a matter of cost effectiveness.”

As we head through the assembly lines I get a feeling for what it takes to build a machine capable of assuring this type of high precision over and over without flaw. The rate of systems breaking down is extremely low and the reliability of the machine is Stratasys’ number one priority. The assembly begins with a kanban board and many visual elements that – coupled with bar codes – tell the workers exactly how to proceed through the various phases of the assembly process and when the machine is ready to go to the next stage. The workers are stationary, while the machines flow through the different areas. 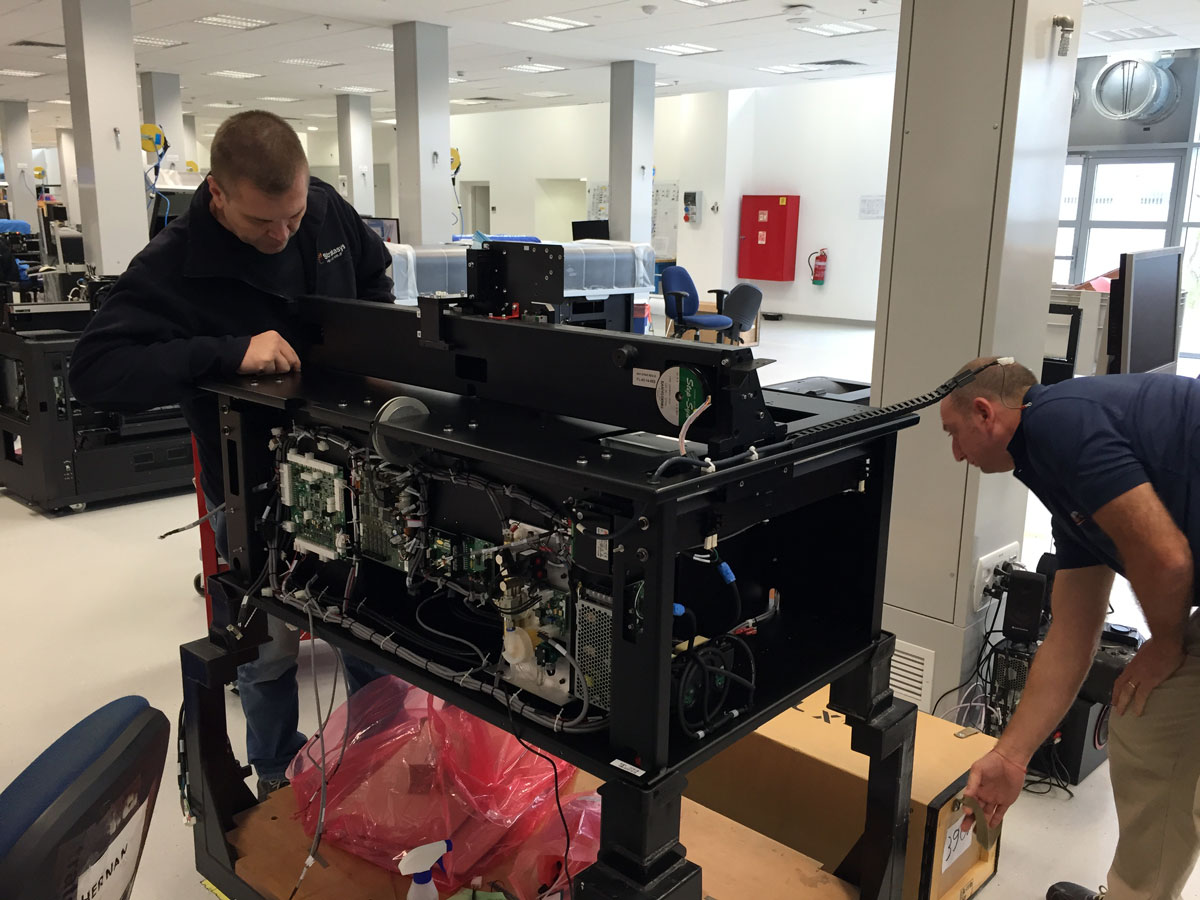 Working here requires skills that go well beyond manual labor. Many of the employees need to have an engineering background and the following stations show me why. Cranes and in-house custom 3D printed tools are used to put together the components, while most of the time is spent on calibration. A scale is connected to the machines internal computer and it weighs the exact amount of the materials jetted. A wizard also lets the customers use this automatic calibration system themselves in case of necessity.

All the jets need to be checked to make sure they are not clogged and that they are all perfectly aligned. The machines are then pushed to their limits. What this means is that in a single print they build all the most difficult shapes and surfaces: sharp corners, thin walls, moving parts and a lot of different curved and rounded surfaces. The thinnest of the thin walls is impressive but perhaps even more impressive is a model that came out of an Objet 30 and – I am told – came out with some imperfections. I don’t see any but apparently the impossibly smooth surface of a pyramid shows some barely visible lines that should not be there. The bottom line is that every machine has to print in the same exact way as every other system and, until it does, it stays in the factory. 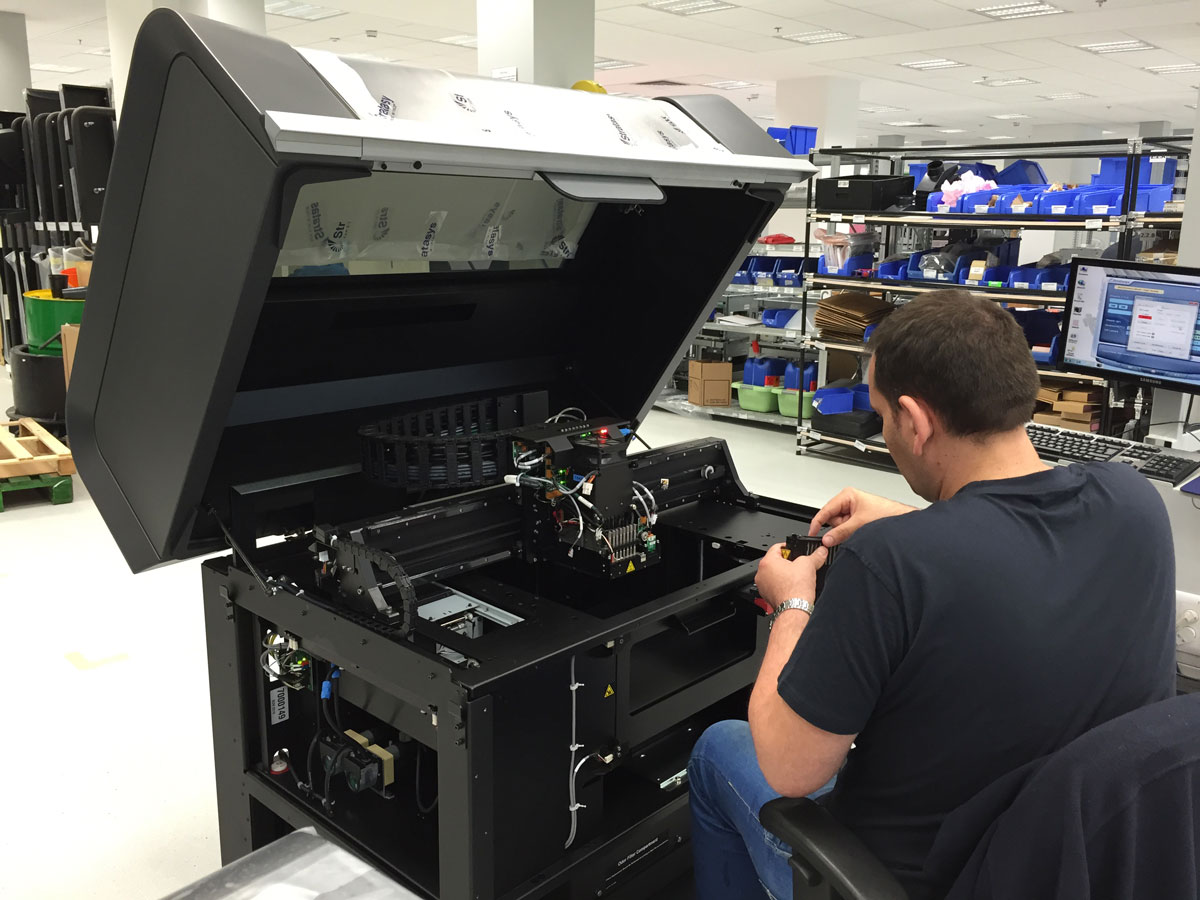 When all tests are complete the machines are wrapped into an anti-ESD (anti-electrostatic discharge) cover. All the three different assembly areas – Connex, Eden and desktop Objet – converge here. Stratasys just announced a broad range of new models, with the Connex 1, 2 and 3 range (capable of up to three different materials plus a support material and different colors) becoming more dominant. The Eden range will however be the first to see the introduction of Stratasys new water soluble materials in the new Eden 260VS, targeted mainly at the dental sector.

Before heading on to the materials cartridge packaging assembly line I got a chance to see the room where Stratasys tests and fixes all the parts for its legacy systems and the clean room, class 100,000, where a special microscope is used to check each nozzle and component movement magnifying them by 300 to 400 times, to the point where an error in alignment is seen even if it measures less than 0.005 microns.

A percentage that is close to the rate of failure for one of Stratasys’ materials cartridges: basically non-existent. In part that’s because the materials laboratory has been designed to be almost completely automated and, even when human work is required, all the tools are in place to make it as smooth and ergonomic as possible. 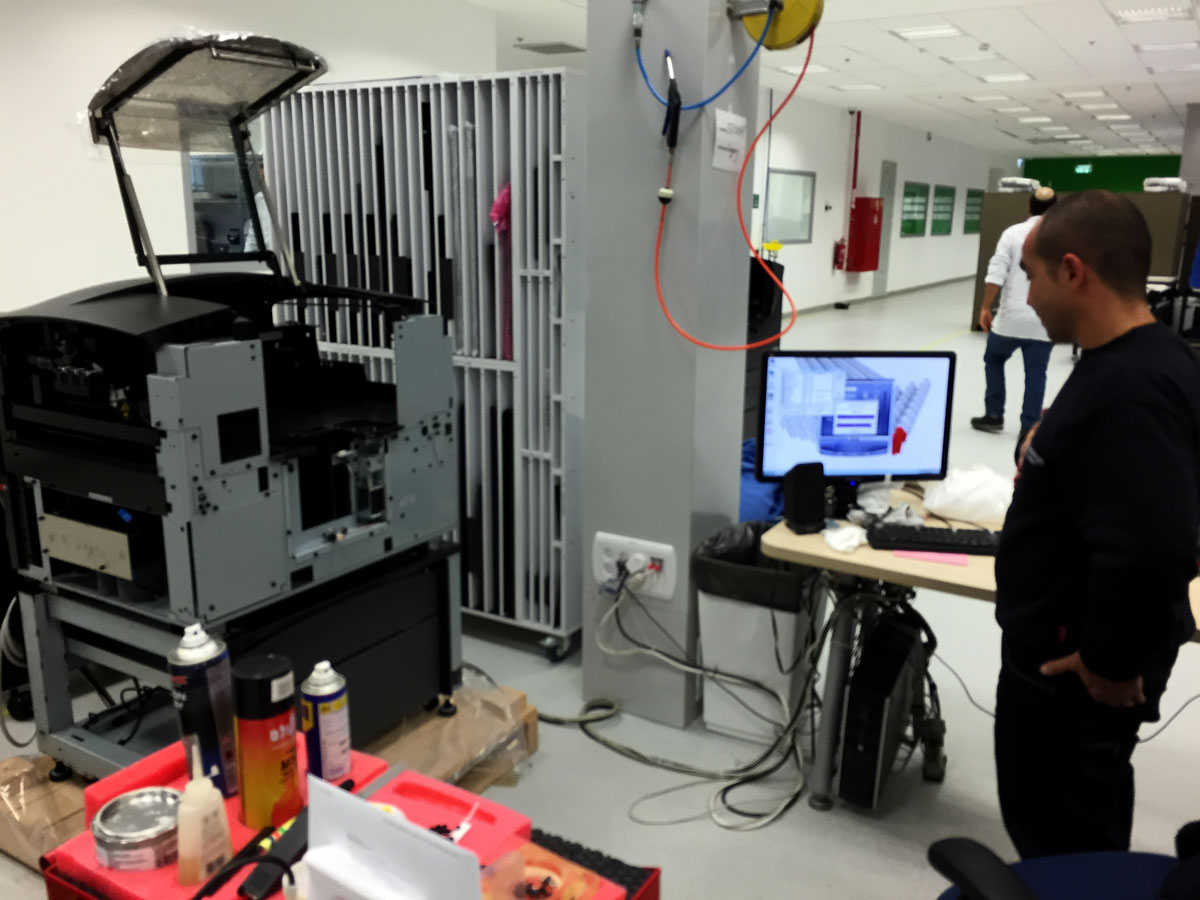 The materials lab, which I was not allowed to photograph, includes two large rooms: one for the mixing and preparation of the materials (sort of like a 1000 liter hi-tech “soup”) and another where three different lines assemble, fill and package the different size cartridges. One fully sealed box contains two one-kilogram size bottles for the desktop systems while the other contains the 3.5 Kg envelopes for the larger Eden and Objet systems. One final section is dedicated to the 18 Kg containers for the huge Objet 1000 system.

Even more than the technology, materials are the key to PolyJet’s future. Stratasys is confident enough in its capabilities and is confident that it will be able to cover most of the market’s needs in terms of rapid prototyping and final products manufacturing through its FDM and PolyJet capabilities and their future evolutions. Like many other 3D printing manufacturers the company’s main priority is meeting demand. This does not mean it is going to stop developing them. Guy Menchik’s Incubation Labs have more than 20 high-end systems working constantly to test new materials and machine capabilities. The technology is easily scalable, and it will be the market, and competition from new players such as HP, to decide when the time will be right for the next quantum leap.