Full year financial results for Stratasys (NASDAQ: SSYS) show a return to growth in 3D printer systems revenue, a large cash balance and an improved bottom line. However, this was not enough for investors and the share price dropped sharply after yesterday’s announcement.

Speaking to analysts and investors, Stratasys CEO Ilan Levin said a “nice large order” for the Stratasys H2000 system is included in the fourth quarter revenue. Launched at IMTS 2016 as the Infinite Build, the H2000 allows partners like Boeing and Ford to 3D print “longer, larger parts much faster and a lot better uptime reliability.”

Revenue at Stratasys is segmented by Product, Systems, Consumables, Service and Customer Support, with all segments showing growth. Of these, at 7%, Customer Support revenue grew by the largest percentage.

Although the financial results show improvements in the bottom line and statements form executives provide a clear long-term strategy, the company’s share price took a hit – down almost 20% on the previous day at one point. The share price has now started to recover.

A number of factors contributed to fall, perhaps the most significant being the low growth forecast for 2018, with $670 to $700 million in revenue provided as guidance.

A summary of the financial results for Stratasys can be found at the end of this article.

As Stratasys has the largest installed base of industrial 3D printers in the industry, there is an expectation that revenue consumables – such as 3D printing filament – should continue to provide increasing revenue.

Stratasys FDM 3D printers are designed to use proprietary materials, that come in cartridges and canisters containing a chip that provides technical data to the printer. While 3rd party filament spools for Stratasys 3D printers are available, for example Triton 3D, using them can have warranty implications.

The slow growth forecast may be attributed in part to the long adoption cycle for industrial 3D printing. In high value industries such as medical, aerospace and automotive, internal qualification processes can be lengthy, between 2-4 years at some customers. Once a customer completes qualification, “we see an increase in business. I think over the coming years, we will see more of that,” said Levin.

The F123 series of 3D printers was successfully launched in February 2017. The F170, F270 and F370 3D printers are an important revenue driver at Stratasys. Aimed at professional rapid prototyping applications and design workgroups. This product is intended to access an untapped opportunity and will continue to add to revenue during 2018.

Lilach Payorski, Stratasys CFO said, “We remain pleased with the results of our efforts to execute on our long-term strategy and deepening customer engagement in our key verticals, while at the same time achieving greater operating efficiencies.”

Stratasys generated $61.9 million in cash from operations during 2017. At year end the company had $328.8 million in cash and cash equivalents, compared to $280.3 million at the end of 2016. While Levin ruled out a share repurchase, the company remains open to “opportunistic acquisition opportunities”.

Some of this cash will be used for planned capital expenditure at Stratasys. CapEx, for 2018 will range between $40 million to $50 million. Some of these funds will finance construction projects in Rehovot, specifically the main premises for offices in R&D activities.

The R&D activities include the continuing development the Robotic Composite system and Evolve Additive. These activities are not anticipated to generate revenue in 2018.

The strategy of the 3D printing company, takes “an increasingly more market segment approach than ever” both on the the go-to-market side, account management, and “a little bit on the development cycle” according to Levin.

This approach calls for the application engineers and dedicated account managers, and results in a high level of customer engagement.

3D printing for healthcare is one of these key segments, Levin explained, “we have a lot stronger clarity today where our technologies fit in within the landscape … we’re much better able to create go-to-market initiatives solely around those areas.”

While this approach to industry verticals does have parallels with that of rival enterprises, including 3D Systems, it should be noted that the strategy taken by Levin’s company is different in certain ways. For example, in a recent interview with 3D Systems CEO Vyomesh Joshi he explained how his company provides 3D printing solutions for “dental labs and clinics of every size”.

In contrast to this approach Levin explained that additive manufacturing systems like the high-end J700 3D printer for the dental sector do, “not appeal across the entire universe in healthcare.” Instead, Stratasys will continue, “to develop long-term relationships for the future, which is what we’re trying to do across all our businesses and not necessarily place many units with many, many different customers.”

The recently announced Stratasys Objet260 dental 3D printer is another example of, “purposeful innovation” at the company.

Understanding the needs of customers and producing solutions that are of value is key to the adoption of additive manufacturing. Levin highlighted Stratasys dental solutions as an example of momentum in healthcare coming from, “the language and the specificity that we can approach the market with and put the proper go-to-market initiatives around it leading us to a better traction.”

Stratasys also used the call to announce the new metal 3D printing system. On this Levin said, “We are not discussing our timeline or expectations around commercialization and we do not expect revenue associated with this new platform to be recognized in 2018.”

An update on Evolve Additive Solutions, a Stratasys subsidiary, was also given by Levin, “It’s a technology that we’ve been working on for several years. I think, it also represents a significant opportunity to displace the plastic injection molding conventional techniques. And so, we’re still working on that development process and the systems related to that.”

Additional guidelines regarding the company’s projected performance and strategic plans for 2018: 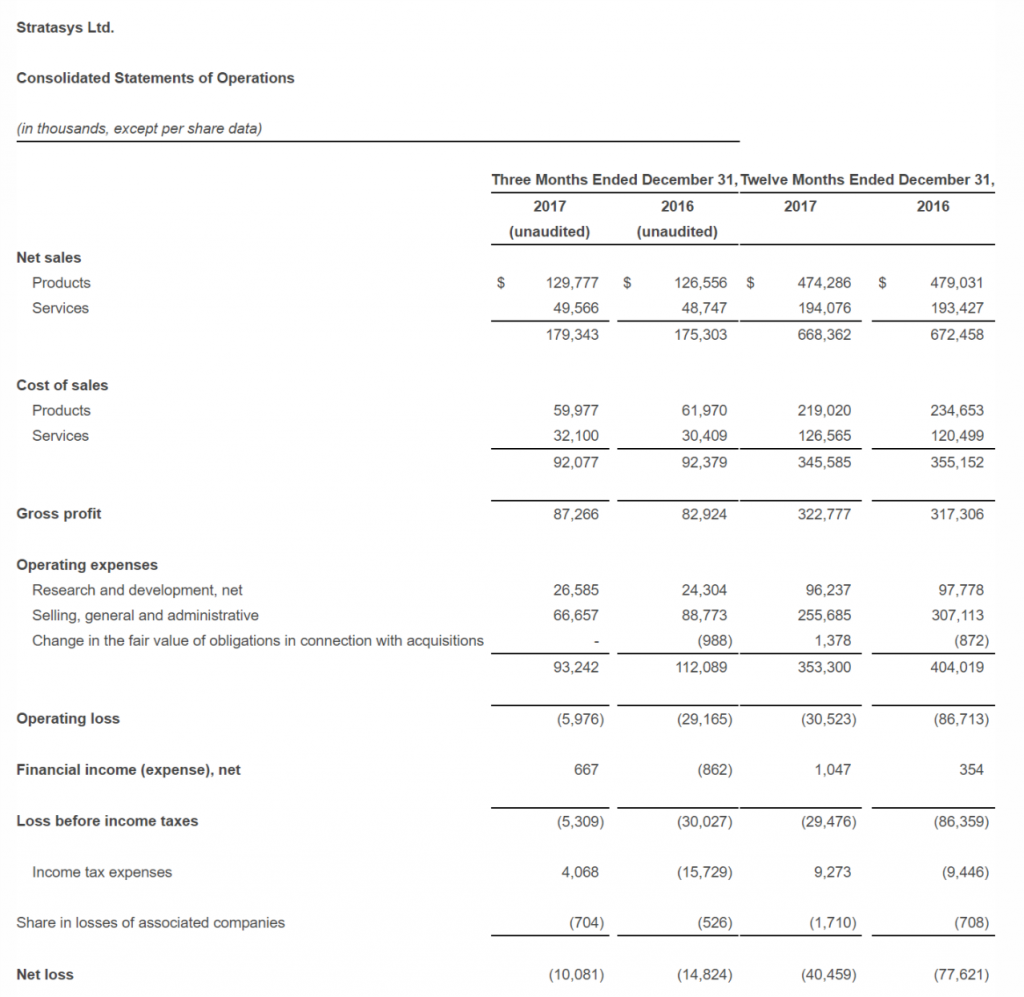