This is a 3D printing story that is sure to lift your day — reminiscent of the RoboHand story earlier this year — it’s inspiring and speaks of the determination and tenacity, not to mention innovation, inherent in humanity.

Davey Jose — a UK-based inventor and global macro strategist with a degree in mathematics and computer science from Trinity College, Cambridge — was brought to my attention by Solidoodle. The 3D Printer Company has been collaborating with Davey since they first hooked up at the opening of the iMakr 3D printing store in London a few months ago.

The collaboration is based around Davey’s idea to develop a low-cost mobile-device-controlled robotic system to assist people with mobility impairments. His work and his personal circumstances have fused to drive the development of this project. Davey is himself limited to the use of his right arm after being struck by a car and suffering a C-1 level spinal cord injury as a young child. After researching automation and robotics last year within the parameters of his career, with a primary focus on technology and how it is changing everything, including manufacturing via automation, Davey’s interest in 3D printing and robotics was piqued. He subsequently decided to take on the personal mission of developing low-cost tech solutions to achieve further independence for himself and others in a similar position with mobility impairments, and 3D printing seemed like a key enabler.

Initial attempts at improved independence had seen Davey convert his home lights and electric outlets, which can now be controlled by mobile devices. He says: “All were low-cost, off-the-shelf solutions that, a few years ago, would have cost a lot of money and been complex to install.” This early success saw Davey move on to more adventurous projects — a mobile base unit, or a “shelf on wheels,” as he calls it, again controlled remotely, which can be used to store things such as medicines and small snacks. His next goal, however, is more adventurous still and involves 3D printing to further develop the mobile unit and incorporate a robotic arm. He is also utilizing low-cost 3D scanning tools to develop virtual models of his orthotic body suit to potentially provide adaptable functions for his robotic arm technology beyond the mobile unit.

Solidoodle’s CEO, Sam Cervantes was more than a little impressed by Davey and his goal when he met him in London. He commented: “3D printing is an amazing technology that’s empowering problem-solvers like Mr. Jose to develop low-cost solutions to improve the quality of life for many people. Our users are what define our products and I am certain that the 3D printing community will provide a major net benefit for the world.” As a result, Solidoodle has provided Davey with a  Solidoodle 3rd Generation 3D printer and materials through its Imagine It charitable foundation and will provide technical support and assistance in using 3D printing to create parts for the project. 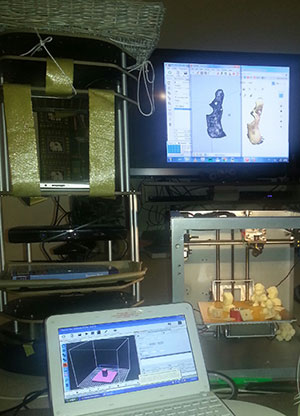 Still in the early phases, Davey told Solidoodle where he is now and where he is going with the project: “The project I’m embarking on is to create tele-operated robotics [that will] be my new arm and help fetch things for me from places in my home that I can’t reach without help. A 3D printer is going to allow me to start realizing and prototyping a robot arm. My end goal is to create low-cost enabling robotics via the Solidoodle 3D printer. The initial aim is to improve the quality of my life though robotics ― this is my primary motivator…The next aim would be to try get the robotics experiments into a form that can help other disabled people out there.

Currently, I’m in the process of streamlining the printing process, testing different slicers and analysing the level of accuracy of the output. I’m spending all my free time after the working day and most weekends on this project. I expect this testing phase to continue a few more weeks whilst I learn more about the SD3 and how best to utilise it for this project.

The next stage will be to start experimenting with the open-source prosthetic arm models out there and test the accuracy of the output and joints fitting. The accuracy of the prints will matter as there will most likely be a lot of interlocking components on the 3D-printed robotic arm. After that, I will return to modelling and creating new models based on my experiments with the SD3 — this is where the real super-fun and creative process will begin!

Once I start printing my own tailor-made designs, I will have to start thinking about servos, actuators and about how to wire up it all up. Then will come the software to control the actuators and remotely control the 3D printed robotic arm. 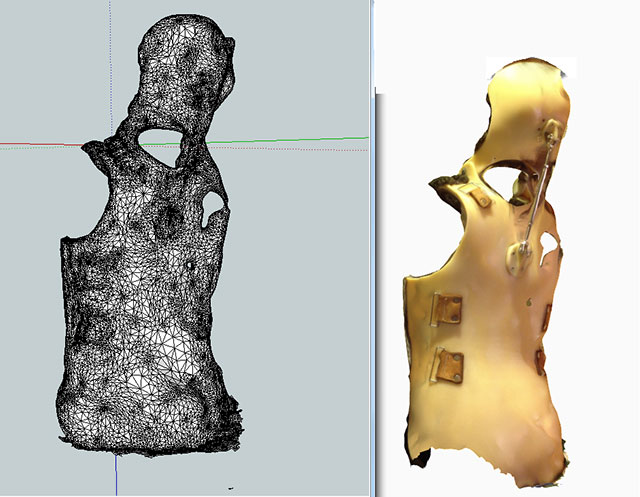 I also recently started using 3D scanning (using Kinect and mobile phone) to capture real physical data. At the moment, I’m trying to capture the plastic orthotic body suit I wear for my neck/back support. The idea is that I will be able to create 3D models for various adaptations and embed robotics inside it – a precursor technology that will go into the to the robotic arm. All this will be possible because of the SD3! It was actually an idea I had after I received the SD3 and realised how powerful this tool is and that much more will be possible in the realm of personal enabling robotics.”

Davey has written in some depth about his views on technology and, more specifically, automation on his own blog.