The Sky Is Not Falling For 3D Printing

After starting the year off with a bang at the 2014 Consumer Electronics Show, there’s been a lot of negativity, speculation and rumour spreading about the 3D printing industry over the past few weeks. But most of the negativity is a typical gut-wrench emotional response due to a lack of logical reasoning on behalf of 3D evangelists and detractors in the worlds of finance and media.

It all started on January 14th, when one of the industry’s leading players, Stratasys, released financial outlook data for 2014 that included a profit forecast that wasn’t up to analyst expectations. That forecast, which suggested an expectation of 22 percent increase in profits on an expected 40 percent increase in revenue, was enough to send the company’s stock down 8 percent.

What really got investors panicked was a similar announcement from 3D Systems regarding their preliminary 2013 financial results, in which the company indicated non-GAAP earnings per share could be lower than expected, at $0.83-$0.87 per share, compared with an originally expected $0.97-$1.03 per share.

Stocks of all pure-play 3D companies fell after 3D Systems’ announcement (see table below), despite the company indicating that they will very likely hit their revenue guidance expectations on the year.

Now that the volatility has settled somewhat, let’s use a bit of logical reasoning to examine why nobody should be panicking in light of recent information.

Investors that got skittish with 3D stocks on news of compressed profitability from industry leaders need to take a step back and see the bigger picture at hand in order to regain the confidence in these companies they seem so quick to let go.

Consider the rate at which these companies are changing in order to stay ahead of the massive increase in competitive pressure. Stratasys and 3D Systems both have made significant acquisitions in both 2012, and 2013, and both have plans for more. Additionally, both companies spent most of the last two years scaling their businesses to deliver better global sales and marketing coverage. And 3D Systems has been especially busy developing a whole lot of new products, and aggressively pursuing strategic partnerships to bring 3D printers to a whole new class of users.

In short, an acceleration of growth strategies across the industry has fuelled internal investment of profits from the industry. This short-term investment does, of course, come with a little bit of inherent risk, because it assumes long-term growth within 3D printing is going to continue. While I believe that’s a very safe assumption, there are many out there who do not share the same opinion.

Therefore, it makes perfect sense that short-term investment to secure a top spot in a long-haul growth market will eventually impact profitability. This is exactly what we are seeing with the two 3D printing market leaders, and especially with 3D Systems, who has been the most aggressive in executing their business strategy in the past 12 months. I would be more concerned if Stratasys, 3D Systems, and other manufacturers weren’t using cash to scale their businesses.

To coincide with the compression of profitability, another nugget of information included in 3D Systems’ preliminary end-of-year financial results announcement has some people ‘down’ on 3D printing. Specifically, the statement that demand for the company’s 3D services and consumer solutions was “soft” during the fourth quarter.

The lower demand for services is a little surprising, but it’s the statement regarding lower-than-expected consumer growth that will no doubt be used by detractors of 3D printing as “evidence” that 3D printing for consumers is a gimmick.

But first, make sure you understand what this statement really says. “Soft” consumer demand for 3D Systems products in the 4th quarter does not surprise me in the least. Why? Simply put, before the fourth quarter of 2013, 3D Systems has not had a strong consumer offering.

The first generation Cube, while widely supported by a number of retailers since mid-2013, at best seemed like an after-thought targeted at users too intimidated to try out a desktop 3D printer that can print more than small trinkets. Meanwhile, the CubeX, the Cube’s bigger brother, still had not quite figured out what it was supposed to be – low cost professional tool or really high cost consumer tool.

Those two pieces of hardware were the backbone of 3D Systems’ ‘consumer’ 3D printing offering for the vast majority of 2013, all the way up until the Sense 3D scanner was released in November 2013. In essence, 3D Systems was clearly not as committed to consumer 3D printing as they were professional 3D solutions, and apparently it showed in their fourth quarter results.

In fact, Photizo’s Personal 3D Printing Insights Report, which deals in end-user trends in 3D printing, showed that 3D Systems was still more of an afterthought in end-users minds in mid 2013 (seen below). 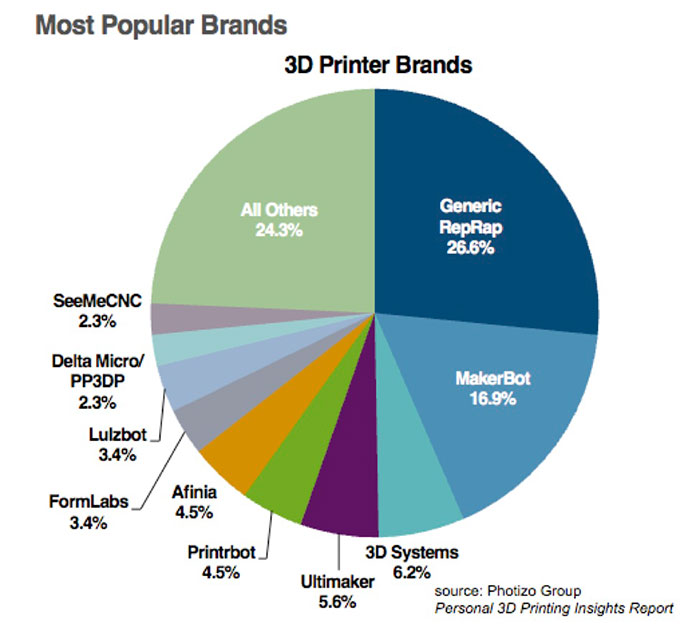 Meanwhile, more focused consumer 3D printing brand MakerBot would likely say that demand for its consumer 3D printing solutions in the fourth quarter (and all year long, for that matter), was quite strong. Most people are incorrectly going to apply 3D Systems’ statement on poor consumer sales to the entire consumer 3D segment, when in reality it should be treated as a reflection of the company’s weak consumer value proposition for the majority 2013.

All of this is likely to change, however, starting in 2014, as 3D Systems has overhauled their consumer offerings right out of the gate in a big way. It would not surprise me in the least if at this time next year 3D Systems is quoting strong demand for its consumer products while having captured a much larger portion of the segment, thanks to potentially revolutionary new printers and a whole host of other consumer-focused solutions.

In summation, consumer 3D printing is alive and well. At some point last year, 3D Systems probably realized that they needed to do more if they wanted to compete in this segment, and has now positioned itself to be a much stronger presence in this area as a result.

Investors have gotten skittish in this very high-growth phase of the 3D market, but reality dictates that these companies do have to make the tough decisions in order to grow sustainably, even if that means reducing profitability and earnings for investors in the short term. It would be wildly irresponsible not to act to ensure a scalable business in such a high growth area. Everybody take a deep breath, because the sky is not falling for 3D printing.