Graphene 3D Lab Inc has put a new material made of single-layer Graphene Oxide on sale. Is this the Graphene breakthrough we’ve been waiting for? Not yet, but we’re getting there.

ORG-GO is not the ultimate Graphene-based material that could change the world, but it’s certainly a step in the right direction. It should deal with one of the major obstacles facing the commercial introduction of Graphene into the wider world. That is the dispersion of the compound in resins and solvents.

It’s a soluble coating, not the fabric

This new material dissolves easily in organic solvents to produce a final solution with a high concentration. It can then be used to create Graphene-reinforced 3D printing inks, as well as to reinforce polymers and nanocomposites. The solution will undoubtedly be used to coat a vast amount of materials and could help produce everything from stronger products to ‘smart clothing’.

Graphene 3D is well on the way to commercial production of Graphene materials that could change the world we live in. It is, essentially, the strongest and lightest material in the world and it has incredible electrical and thermal properties that mean it can have an impact on almost every area of our lives. It can revolutionize electronics, provide thin and flexible screens, it will be useful in water filtration and also has potential uses in tissue engineering.

It’s lighter than steel and it’s flexible. That alone makes Graphene a prize that the world is fighting for.

Graphene does it all

The European Union put up a $1 billion investment in 2013 and some of the sharpest minds in the world of material science are solely focused on making it commercially viable.

But producing a stable version on a commercial scale is still a conundrum that has tormented scientists since Professors Andre Geim and Kostya Novoselov scooped a Nobel Prize for isolating it in 2004.

It has still made its way on to the market and Graphene 3D offers more than 100 products to more than 11,000 customers. They include NASA, Apple, Samsung, Harvard University and Ford Motor Co. ORG-GO will join this line of products on the company’s e-commerce platform: Graphene Supermarket.

At $125 for 100mg, Graphene Oxide really isn’t cheap, but then the cost of production is the main problem preventing widespread adoption of the compound. 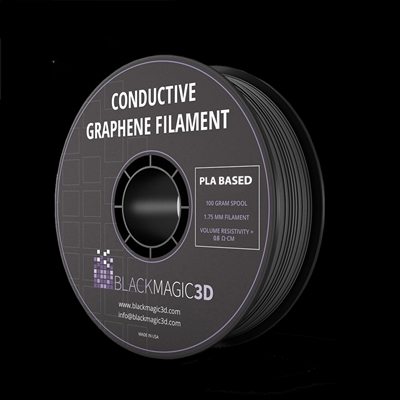 The filaments are Black Magic

The company offers a variety of Graphene-infused FFF filaments through Black Magic 3D, including a conductive Graphene filament that it recommends for printing sensors and circuitry. It also sells flexible Nylon, magnetic PLA, silver PLA that has the appearance of metal and a variety of other complex filaments that satisfy the industrial market.

Graphene 3D holds an interesting patent for the preparation and separation of atomic layers of Graphene. This is, potentially, the future. It gives the company an energy efficient process to separate out nanoparticles that could be the basis of a large-scale production method at much lower prices than the market offers right now.

Nanomaterial construction is on the way

We still need to find a way to turn the nanomaterials into usable, large-scale products, but a recent advance by researchers at Virginia Tech could hold the key to 3D printing graphene materials that are stable and truly harness the power of this incredible compound. Before now, scaling up Graphene production compromised the integrity of the material, which seriously diminished its strength and conductivity.

If their lab-based success with scaling up the production of nanomaterials can cross over into the commercial world, then we could soon see the likes of Graphene 3D breaking all kinds of scientific barriers and material science will take a quantum leap forward.

Calverton, New York based Graphene 3D is on the brink of something really big. ORG-GO is a step in the right direction, but it will pale into historical insignificance in the coming months if the company can actually produce graphene sheets.