Shapeways has presented a new method for independent designers to make it onto the shelves of well-known retailers, proving that in the world of web 2.0, it might be more about getting noticed than who you know. Through a partnership with Neiman Marcus, two Shapeways Shop Owners will each have a design featured on the pages of the department store’s website. 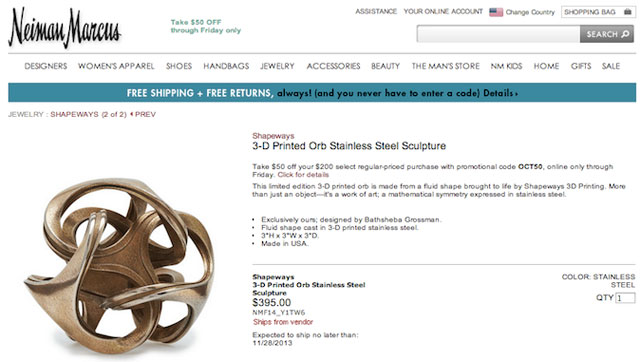 Bathsheba Grossman and Roger Pearce have both caught the eye of Shapeways higher-ups, but by different means. Pearce’s monogrammed pendant, which now sells on the department store’s website for $295, won the Shapeways pendant design contest with his sterling silver heart necklace.  Bathsheba, on the other hand, has already become well-known after designing pieces for her Shapeways store for awhile now. Using mathematical models, Bathsheba has earned a swanky place at Neiman Marcus, selling her stainless steel orb sculpture for $395.  Savannah of Shapeways hints that, with a lot of work on the part of Shop Owners, it’s possible for future designs to make it to places like Neiman’s. Aside from entering their monthly contests, she suggests that you enter your 3D prints to the Feature This! subforum at Shapeways. It’s unclear if there is a markup for selling their wares with Neiman Marcus and how much is entitled to Shapeways, but it’s indicative of a new era in retail.

Perhaps Shapeways is just the beginning. Etsy shop owners have been featured on the pages of magazines; maybe we’ll see their wares in big name stores soon, too. Are we ushering in a new era of democratized access to the retail market? Or are there just new players controlling that access? The answers to those questions have yet to be determined, so there’s a chance that we have a say in which way the future sways.