Mike introduced the Robox 3D printer earlier this month, and now there is some clearer visibility on this new system as it kicks off on Kickstarter.

Apart from the rhetoric typical of new 3D printers — “anyone can do it”; “easy-to-use”, “reliable”; “highest resolution;” “plastic” ….. you get the idea — there are some interesting reasons to look closely at this one.

First off, to qualify the claims made by the CEL team, is their background: to date the Robox has been in development for 18 months, which has been funded by their “highly regarded power tool business, enabling us to design and make fully functioning prototypes — so you can rest assured our product does what we say it will.”

So what are they saying.

Well apart from the highest resolution of a plastic FFF system — 20 microns — and the self-evident styling of the design; CEL has developed a 3D printer with a proprietary HeadLock™ system that allows the Robox to operate with different heads, “which means different tools that can perform a whole range of new functions from stylus cutting to paste deposition, and coming soon, 3D scanning.” 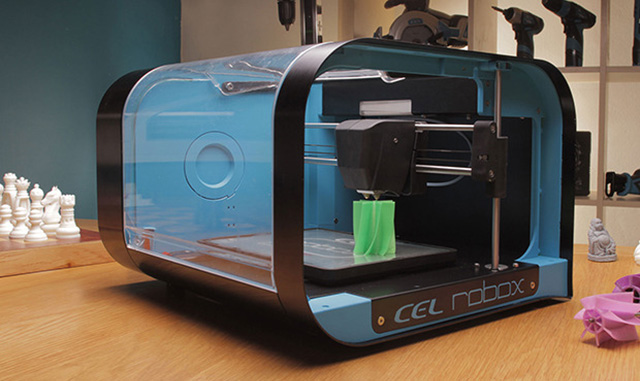 Another interesting feature is that the Robox has some tweaking automation built-in, specifically it “has been designed to do all its set-up and material loading automatically. To load a reel, simply click it into the side and feed the filament into the entrance path and the printer will do the rest. Not only that – Robox will recognise instantly what material you have installed, and set all of its printing parameters appropriately – no entering values and experimenting. To remove a reel, simply press the eject button, the printer will unload the filament allowing you to remove the reel. There is also no bed-levelling to worry about either; the head is calibrated at the start of every job for hassle-free printing.”

There’s also an enclosed build chamber. CEL says the “Robox has the option of a fully-enclosed build envelope for stabilising the printing environment, improving results and making it safer. I’m not sure how they’re getting around the Stratasys patent on this one, with the “fully enclosed” chamber. I was talking to another vendor recently (OTR) who says it’s possible if said chamber is not FULLY enclosed….. but that’s probably a conversation for another time.

The Robox also runs proprietary software. CEL decided that “rather than bundle Robox with the usual selection of Open Source software, we developed our own so we can take advantage of the many innovative hardware features already designed into our Robox platform. This further enhances the simplicity and usability of the printer for both experts and novices alike.”

History suggests that one of the biggest hurdles for 3D printers launching on Kickstarter to overcome is meeting the production and shipping schedules. For this campaign, there are more than 2300 units up for grabs, in a bid to take the funding total over the target of £100,000. That’s a stiff production goal, but, considering their background in power tools, this may be grounded in experience rather than optimism.

Early backers can get their hands on a Robox for the pre-order price of £700. The campaign started yesterday and at time of writing it’s over 20% with 29 days to go. So the early signs are this has legs.

If you pledge £5000 or more (up to 10 available) you are invited to join the team for the official Robox unveiling at CES in January.

You can see the Robox in action and get sight of the team behind it in the campaign video: