Even though it’s nicer to think positively about what most people immediately associate with 3D printing, the reality sometimes deviates from the ideology. And while there are many good, positive applications that already contribute to improving people’s lives worldwide — such as dental and medical implants — and research into future applications such as 3DP-infused sustainable meat; many will probably also think of a new world of terroristic and other security threats via 3D printed guns and unmanned aerial vehicles carrying bombs courtesy of the prolific press coverage. Of course there are also the innocuous applications – like customizable iPhone covers – that have likely now penetrated the consciousness of the average man on the street.

Pointing fingers for this issue is also tricky – on one side applications that could actually really benefit and add value to many lives are not yet as widely available as potential suggests. On the other hand, the media does love controversy and headlines that bring those ever more important clicks to their services, driving editors to sometimes over blow issues to unbelievable extents — and that’s just a tiny fraction of the overall bigger picture. Despite all this, weaponry is an issue where 3D printing is already being widely applied to bring benefits and improve the workings of law enforcement – and of course the military.

Besides building and improving drones and gun parts, 3D printing also enables a whole new world of possibilities regarding military-oriented applications of a different kind. Earlier this year we reported on the Expeditionary Lab Mobile concept here on 3DPI, where the army had transformed a regular shipping container into a mobile lab with CNC machines, 3D printers and other FabLab-esque equipment. In today’s story, the logistics are at the core with the Army’s Research Laboratory having partnered up with Purdue University in order to create the means to build bullet-proof vehicles and aircrafts, which would enable quickly repairing them when broken down – on the spot – with 3D printed spare parts. 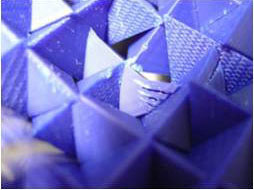 The central idea behind the project is to use finite-element analysis to optimize structures – by using ABAQUS engineering analysis software with Python – to build more durable and safe energy absorbing parts for the vehicles. The process involves breaking down the basic structure of parts, which are then reconfigured and assembled logically and interlocked in an optimal orientation to improve the performance of the end part – and which could also be easily replicated and replaced by the operator on the spot. The process does sound familiar, but assuming that instead of the public Thingiverse, the soldier in charge would be using the Army’s own database of different vehicle parts and components, such as the topologically interlocked structures making up for future (and blast) proof vehicles: “The benefit for the Soldier is an after-effect. The TIS would provide an excellent energy absorption and dissipation mechanism for future vehicles using additive manufacturing. Subsequently, the Soldier can print these structures in the field using additive manufacturing by simply downloading the model generated by the designer/vendor”, explains Ed Habtour, research engineer of the Army Research Laboratories’ Vehicle Technology Directorate. 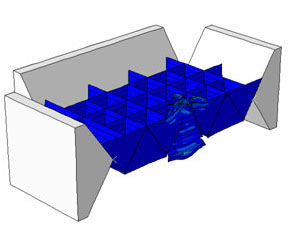 Even though the TIS project is still just that – a project – Habtour sees it potentially changing the way damaged vehicles in war zones are fixed: “Sometime in the near future, Soldiers would be able to fabricate and repair these segmented structures very easily on the front lines or Forward Operating Bases, so instead of moving damaged ground or air vehicles to a main base camp for repair, an in-field repair approach would essentially mean vehicles would be fixed and accessible to warfighters much faster at lower costs. We want to change the conventional thinking by taking advantage of exciting materials and manipulating the structure based on the principle of segmentation and assembly.”

Perhaps this immediate and on-the-spot angle could also be brought closer to non-military personnel’s lives as well. After a couple of incidents with the car waiting for some trivial yet original spare part from the factory at the shop, a DIY solution that could create the exact part within hours wouldn’t doesn’t too bad.

Images courtesy of the US army research laboratory