New research demonstrates that quantum dots solve a key issue with current 3D printing materials. I spoke with Keroles Riad, PhD student at Concordia University Montreal, Quebec, Canada, about his thesis on the photostability of materials used for stereolithography 3D printing. The research was supervised by Prof. Paula Wood-Adams, Prof. Rolf Wuthrich of the Mechanical and industrial engineering department at Concordia and Prof. Jerome Claverie of the Chemistry department at the University of Quebec in Montreal.

While quantum dots have been shown to cure acrylics, Riad says this work is the first demonstration of the process in epoxy resin.

3D printing is often richly rewarding because it spans multiple disciplines. Here we look at a new thesis that advances the critical area of materials. The approach taken uses engineering, chemistry and physics to overcome the issue of stability present in current stereolithography processes. The results could form the basis of superior materials and wider use of 3D printing in many areas.

Now studying for a PhD. Keroles Riad recently completed his masters and is also bachelor of mechanical engineering. He tells me that the focus of his research came after a tour of Montreal’s Axis Prototypes where he learned about the stability issue, or the tendency of UV cured parts to degrade under sunlight.

From the lab in Montreal he continues, “The whole stability problem with SLA resin is because the same UV you print with is also present in the solar spectrum. Initiating the [photocuring] reaction with wavelengths outside the solar spectrum would solve this.” 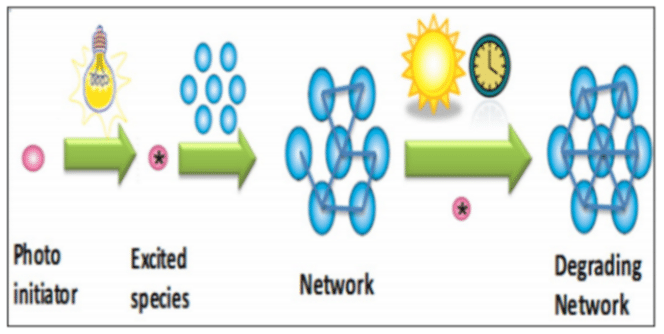 Figure 1 A schematic of the photocuring process and photoinstability of cured materials. Image courtesy of Keroles B. Riad.

His thesis, “Photocuring epoxy with quantum dots for 3D printing”, describes how 3D printing is currently, “limited by material development.” In particular, while stereolithography is, “energy efficient, accurate, fast and capable of forming composite materials” the “photosensitive materials are unstable in daylight during end use limiting their viability for making functional parts in many applications”.

The goal of Riad’s work is, “is to photocure only with light outside of the solar spectrum on Earth” and thus make photostable parts. The thesis represents the first stage of research and demonstrates that epoxy can be cured with quantum dots.

“Quantum dots are semi-conducting nanoparticles, for my application the unique part is that I can change the wavelength it is sensitive to by changing the size of the nanoparticle.”

Riad sees stereolithography as a key contender for the title of 3d printings most valuable process. He explains that 3D printing with metal is very energy intensive and that, “surface finish in printed parts also have to be improved due to the inherent porosity of the parts produced.”

In contrast stereolithography, “uses polymeric materials, like epoxy, to print so it is possible to 3D print using composites. It is based on a photochemical reaction and does not require heat. Therefore, it is more favorable than SLS in terms of energy requirements. It also offers a superior surface finish compared to SLS.”

Of course stereolithography has its own set of issues. “A critical issue is the photo instability of the cured material and that UV coating is often used as a short term fix,” says Riad.

Stereolithography takes advantage of photocuring, a crosslinking (or bonding) mechanism triggered by light. Photocuring does not require heat for curing which makes it less energy intensive than other processes. Riad explains, “Two distinct photocuring mechanisms exist: free radical and cationic.”

Scientists have previously demonstrated photocuring of acrylic resin using a free radical mechanism. Free radicals are atoms, molecules or ions with unpaired electrons, typically they are highly reactive and may spontaneously polymerize to form chains or 3D structures. As Riad writes this occurs, “upon absorption of a light of a wavelength specific to the initiator. That radical activates the polymerization of acrylics via their double bonds. Two classes of free radical photo initiators exist: cleavage initiators and H-abstraction ones.”

Benzoin is a cleavage initiator and results in radicals that begin the curing process. Such radicals have a high quantum efficiency but due to thermal instability are difficult to store for longer periods. The second class, H-abstraction, includes Benzophenone. For this class and upon activation “by light, a triplet is formed, which reacts with a hydrogen donor and, eventually, leads to the formation of two radical species,” writes Riad.

The epoxy resin used in stereolithography, “photocures cationically where an initiator decomposes upon activation by light to cations and, eventually, produces a protonic acid triggering the cationic polymerization of epoxy monomers.” Cationic polymerization causes monomers to form polymers and is also used in the production of material for bicycle inner tubes.

Riad continues to explain that, “UVA lasers (around 365nm) are used to locally photocure the resin into the desired three dimensional shapes. The resin contains UVA-sensitive cationic initiators.”

Use of UVA lasers is problematic because, “the solar spectrum on Earth starts at about 300nm and everything below is blocked by the ozone layer. This means that solar light on Earth also includes UVA. That UVA excites the catalysts in the 3D printed material even after printing leading to undesired reactions and continuous changes in properties causing part failure.”

As mentioned, while coatings can be used, these only serve to slow down the process rather than fully stop it.

Riad proposes, “that initiators sensitive to light only below 300 nm be used to initiate the photocuring of epoxy resins.”

This process depends on the fact that behavior of materials at the quantum scale is not the same as at the macro level.

For quantum dots made from titanium dioxide (TiO2), “once you get smaller than 10 nm the band gap starts increasing and the wavelengths absorbed decrease” says Riad. He explains, “The band gap energy of the quantum dot increases as its size decreases. This is referred to as a blue shift as the increase in band gap is a decrease in absorption wavelength so colored materials shift to the blue end of the visible spectrum”

Smaller particles respond to a smaller wavelength, this means the band gap becomes larger. Riad said, “The band gap energy of a semiconductor is the energy required to create an exciton, an electron-hole pair.”

Elsewhere, quantum dots have been referred to as artificial atoms. This is because their energy state characteristics have an analogy to those found orbiting natural atoms.

Other uses of quantum dots include as fluorescent markers on biomolecules, in photovoltaics and optical quantum computing. Other applications include MRI and also in TV screens. Manufacture is possible from most semiconducting materials via methods including wet chemistry techniques and flame spray pyrolysis.

The work is at an early stage but it demonstrates the value a multi-disciplinary approach using 3D printing brings.

Riad’s future work will address the manufacture of quantum dots and their observation below <300nm, curing with UVC light and increasing the stability and speed of the reaction. He is also researching working with 3D printing and graphene.

The full thesis can be read here (PDF).