Proto Labs Inc. (NYSE:PRLB), the 3D printing on-demand manufacturer, released financial results for the second quarter of 2016 on Thursday morning. Despite increasing revenue the company failed to met earnings targets. As a result the value of shares in the company dropped by 17% in early trading on the NYSE. There was a slight recovery and the share price was down 13% by close, trading at $53.29, $2.79 above the 52 week low.

During Thursday mornings earnings call with investors and analysts Proto Labs President and CEO, Vicki Holt announced the company had missed EPS targets by a penny. Yet the $75 million headline revenue figure n represents a 17% increase on the previous year and is a record for the company. However expenses have increased at a higher rate leading to a decrease in net profits. The direct costs of manufacturing components for customers increased by 24% to $32.7m while operating costs increased by 36% to $27.3m. John A. Way, CFO, explained that operating costs included, “$873,000 related to the exit of our metal and magnesium injection molding operations” as a non-recurring expense. Holt addressed this area and said the coming months will see measures to improve, “Sales performance and efficiency through our operations.”

Proto Labs place “Product developers at the center of our universe,” said Holt. Translating this to sales involves an element of customer education. The Proto Labs business model is not about simply making components rapidly but is based upon strategic consultation. The sales process involves communicating to potential users how the “differentiated digital business model help them solve problems.” Holt says Proto Labs cuts the time to market and “can save millions of dollars in R&D and get [customers] to revenue faster.” 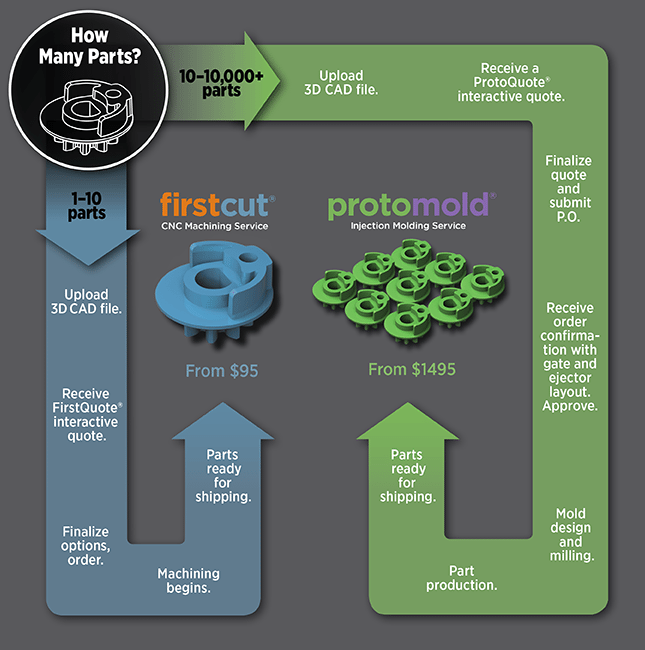 Excluding customers who purchased Alphaform products, Proto Labs report that 20,240 (17,194 H2 2015) product developers and engineers were served in the 6-month period ending June 30 2016. This is an increase of 3,046 or 18% on the previous year. Growth in customer numbers by quarter shows a lower figure of 14% when Q2 of 2016 is compared to 2015. The reported growth in customer base, albeit at a slower rate, is still encouraging. This indicates that although economic conditions may be unfavorable, enterprises see value in the services provided by Proto Labs. Analysis of this data shows that total revenue per customer has also increased marginally. For the most recent quarter the average Proto Labs customer spent $5,545 compared with $5,411 in the comparative period, an increase of 2%. Using net income to perform the analysis gives a figure of $790 per customer, a 20% decrease on prior period reports.

“The decline in revenue per product developer is reflective of the mix of our business with strong growth in 3D printing and lower growth in our injection molding and CNC machining businesses,” said CFO Way. 3D Printing revenue increased by 67% or $3.6m to $9.1m when compared the same quarter in 2015. The value of 3D printing sales grew, and continues to grow, by approximately $400k every 3 months. This growth was achieved despite the fact the company relocated its DMLS and SLS 3D printers to a new facility. Stereolithography manufacturing is in the process of moving and no disruption to services is anticipated.

3D Printing makes up 12% of Proto Labs’ revenue in the most recent quarter, a 4% year on year increase. Injection molding accounts for 60% and CNC 26%, the remaining few percent of sales are categorized as ‘other’. The increases in expenses are attributed partly to the lower profit margin on the 3D printing business. While the gross profit margin on injection molding and CNC milling are slightly above 60%, this figure is approximately 50% for the 3D printing business explained the CFO. Holt said that 3D printing revenue is expected to grow and will make up, ”around 15% of our sales as it gets to more of an equilibrium.”

With sales failing to keep pace with rising expenses Proto Labs reported a year on year decrease in net income of $995k. Total net income for the quarter was $10.7m. “The lower year-over-year growth was a reflection of a difficult economic environment, as well as some disruption to our sales team in the U.S,” explained Holt. The company, “expect to see improvement in sales growth, especially in the Americas, over time. We remain confident in the fundamentals in our business – our market size, differentiated proposition and excellent customer experience.”

Analysis of revenue by geographic market share indicates a decrease in the U.S. market. In the most recent quarter Proto Labs domestic revenue accounted for 69% of the total figure, versus 77% for the comparative period. This decrease was offset by a 7% increase in the share of revenue generated in Europe where the company reported total revenue of $17.2m ($10.1m Q2 2015). In Japan, Proto Labs increased sales for the quarter by $745k to $2.36m ($1.61m Q2 2015). Holt said, “We are also beginning to see traction from our expanded sales and marketing efforts of 3D printing in Europe and anticipate this business will continue to grow throughout the year.” 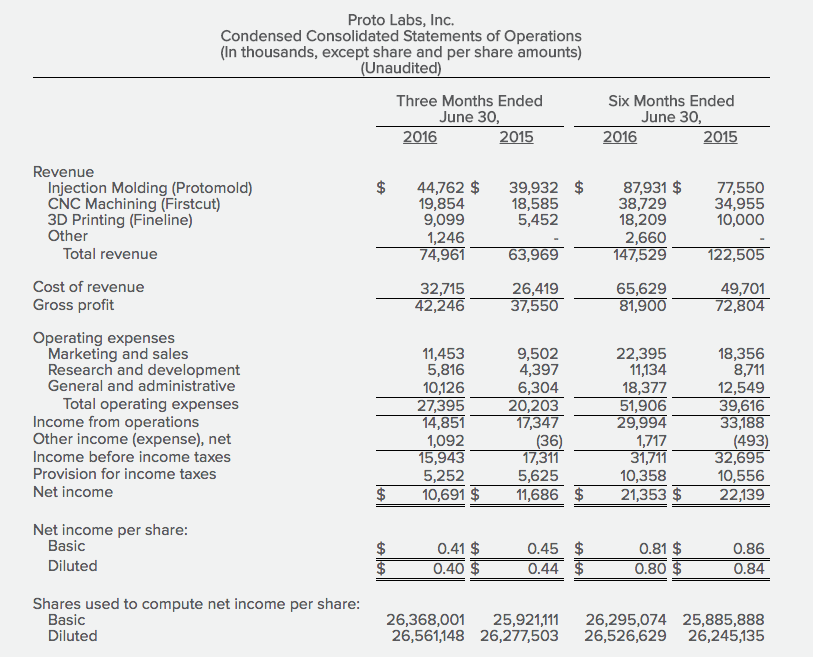 Data from the Economist’s poll of forecasters suggests that U.S. GDP growth for 2016 will be 1.8% with a 2% growth in the following year. For the Euro area the forecasts are 1.5% current year GDP growth and 1.2% for 2017. However, these may not be the best way to assess future earnings for Proto Labs, “It’s difficult to identify a single economic indicator, which consistently and clearly tracks the fluctuation in our revenue growth,” said Holt. Pointing to one measure by which the health the economy is measured Holt said, “Consumption of cutting tools, an indicator of utilization of U.S. machining shops, has declined 9% through May 2016 compared to the prior year.” Cutting tools are a consumable item used in manufacturing and a decrease in the figure points to a weaker environment.

Commenting on the impact of Britain’s decision to leave the European Union the CFO said, “we feel the potential impact will be partially mitigated due to the manufacturing presence established in Germany as a result of the Alphaform acquisition.”

For readers searching for work, Proto Labs are currently in the process of recruiting a Chief Revenue Officer and additional Sales Managers. “We offer robust and valuable business solutions to our customers. Our technology, scale and business model are differentiated, compelling, and have significant barriers to entry,” said Holt.

Looking to the future, Proto Labs,“Expect Q3 revenue to be in the range of $73 million to $78 million representing revenue growth of 7.5% to 15% over the prior year” said CFO Way.