Could we print our medicine at home?

Can you imagine a world where you print your own pharmaceutical drugs at home? It’s a long way off, but a paper published in the International Journal of Bioassays suggests that that’s the road we’re on.

A team of researchers from Channabasweshwar Pharmacy College have put together a paper that confirms 3D printing’s increasing importance in the medical world. It aimed to identify the technical issues standing in the way of complete tissue regeneration and look at other potential uses. These include personalised drug treatments that we can create without even visiting a doctor.

They have extrapolated the potential benefits and suggested that one day we could all have access to bioprinters that can produce advanced drug delivery ‘scaffolds’. Potentially, we could even produce replacement tissue at home.

Get into 3D printing, or get left behind

They also echoed the familiar belief that pharmaceutical and medical companies that don’t embrace 3D printing are likely to find themselves at a disadvantage.

Some of the hypotheses seem a little far-fetched. That replacement tissue, though, is never likely to be a replacement heart. We will always need hospitals for that. But as the technology progresses then the sticking plaster of tomorrow could actually be a skin patch, tailored to our body, which speeds recovery from a small wound.

While we are used to taking pills, too, there may come a time when drugs can be administered through a medical scaffold. That again can be custom built to our specification, as part of a personalised program.

The paper was written as an overview of 3D printing for students at the Indian university, so this is not an in-depth look at what is coming next. Even the authors say that some of their ideas could take decades to actually happen. But they do raise some interesting points.

Fast and slow delivery pills on the way

Inevitably they cover 3D printed drugs. In the short-term the authors expect to see higher doses in smaller pills with a fast-melt delivery system. Simple structural changes, as well as the inclusion of catalytic elements, will help drug absorption and efficiency.

Slow release is also an option, so that doctors can regulate patients and produce a slow drip feed of a drug into their system with a simple pill or scaffold.

We will be able to coat certain drugs taken in liquid form to mask the taste. Even tablet design could change radically to improve the performance of particular drugs.

Aprecia Pharmaceuticals Company has already received FDA approval for its epilepsy drug, SPRITAM. This has to be the first of a long line of 3D printed drugs that are on the way. The only stumbling blocks for the industry is the speed of current 3D printers and the cost of making the switch. 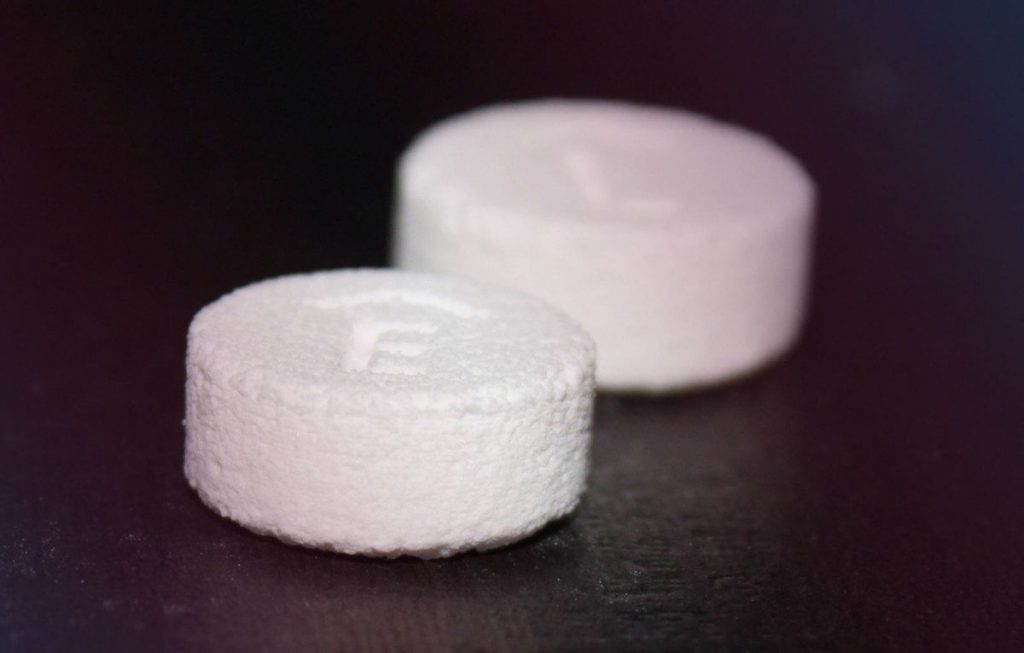 Print speed won’t stand in the way for long

These are minor problems. 3D printing is advancing at a frightening pace and full manufacturing, rather than prototyping, is now the main goal. So print speed is coming under the spotlight and it should not take long to fix this issue.

As soon as we’re round that roadblock, development should pick up the pace and drugs as we know them will change radically.

We are already 3D printing tissue for medical testing and the National institute of Health already has a system in place where people can simply download the design and print a prosthetic limb. So printing your own drugs has to be an option in the end.

It’s a long way off, of course, and there a mountain of regulatory issues to overcome before we can print medicines or a piece of replacement skin in our own home.

It’s an intriguing premise, nonetheless, and one we’d love to see become a reality.