Which PLA is the Best for 3D Printing? Ask 3D Matter

On forums and social media groups devoted to 3D printing, the question is often raised of which filament manufacturer is the best. See, 3D printing filament can vary from supplier to supplier in terms of consistency, quality, and price, among other criteria. And, as more and more companies take to the 3D printing market with their own filaments for desktop fused filament fabrication, navigating these options is increasingly difficult. Materials consulting firm 3D Matter has taken it upon itself to look into the matter, publishing a white paper discussing the variety of PLA filament out there and nailing down which is the best, based on a number of criteria.

3D Matter was founded by Arthur Sebert, an engineer from Ecole des Ponts Paristech with a Masters in Engineering for Sustainable Development from the University of Cambridge.  Working in strategy consulting for Roland Berger, in the field of chemicals and energy, for the past four years, Sebert became an expert in materials and manufacturing. Believing that 3D printing will cause a major shift in manufacturing, he sees materials as the key catalyst for growth in 3D printing. As a result, he began 3D Matter to provide definitive information on materials for 3D printing, at both the consumer and industrial levels, beginning with PLA for desktop fabrication. 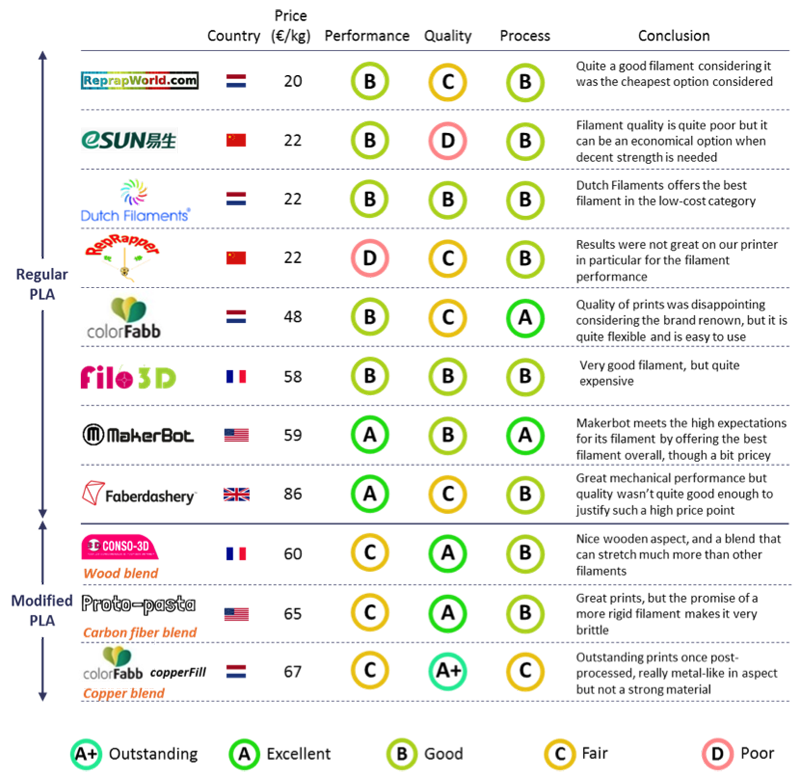 As a result, 3D Matter came up with some pretty unique findings, writing:

Regular PLA filaments show a wide range of price points, but it didn’t seem justified considering the slim differences between them. Not considering price, Makerbot tested best on the aggregate assessment. With price in mind, Dutch Filaments offers a great filament at a low cost.

Modified filaments are quite different from regular ones and therefore may qualify for a higher price point. While the performance is not on par, the quality of the prints is significantly improved and unique. They offer very promising prospects for filament 3D printing.

It’s no surprise that price points between filaments don’t necessarily signify better materials. What is surprising, at least based on my observations of the RepRap community, is that MakerBot came out on top, as I’ve seen at least a handful of open source advocates complain about the price of MakerBot filament, compared to materials from other manufacturers. Luckily for them, they can turn to Dutch Filaments for a lower priced feedstock.

You may already be wondering as to the exhaustiveness of this test.  3D Matter, as a start-up, has only just begun the testing process and acknowledges that there are some issues inherent in the research, including the following:

Recognizing these shortcomings, 3D Matter has still provided the beginnings of what could be a very useful database for desktop 3D printing filaments, perhaps a Consumer Reports-style handbook for determining which filaments may best suit a given task.  As the start-up gains steam, and resources, the variables accounted for and feedstock varieties will only become broader.

3D Matter already has already begun work on its next study, determining the relationship that the infill percentage, layer heights, and infill pattern of a 3D printed object has with its mechanical resistance.  Naturally, the firm also plans to begin testing other materials, such as ABS, resins, and powders and will implement other printer models in their testing procedures.  Sebert also tells me that 3D Matter is reaching out to industrial clients to pursue studies specifically tailored to their needs.  With that in mind, those keen to see 3D Matter examine materials for industrial 3D printing are encouraged to get in touch with the firm.  To read the complete PLA study or contact 3D Matter, visit their website here.