Pinć is a 3D printed virtual reality (VR) case for the Apple iPhone 6 that uses clip-on finger sensors as an interactive interface, just one of the many such headsets currently in development.  See, there is a new wave of interest in VR. The first wave of interest appeared in the 1980’s amidst considerable anticipation and expectation only for virtual reality to drift back into the shadows for a decade or so after the initial excitement passed. Unlike the smartphone, which caught on in the consumer consciousness pretty much straight away, VR has had to wait for its time. And increasingly it looks as if the time is now.

Back in the days that the dream-like world of virtual reality was first being publicized, the technology seemed to me as futuristic as a space station orbiting Mars. Apparently, whilst I was a kid thinking such things, Wikipedia now tells me that “Antonio Medina, a MIT graduate and NASA scientist, designed a virtual reality system to ‘drive’ Mars rovers from Earth in apparent real time despite the substantial delay of Mars-Earth-Mars signals.” In the 1980’s virtual worlds such as those in Tron were tied to the premise of technological advancement. In Star Trek ,the holodeck was perhaps a 24th century vision of where virtual reality could eventually lead to. The 1990’s saw the then gaming platform giants of Sega and Nintendo flirt with VR for home entertainment systems. Some twenty years later, some of the gaming platform giants of today are encouraging the new generation of VR, such as Sony’s Project Morpheus and Facebook’s $2 billion purchase of Oculus Rift.

So what is the reality of a 3D printed VR headset? Can we expect a piece of technology that rivals the Oculus Rift VR headset? In a word, no. This is a different strata of quality. Here we are looking at a piece of technology that is about cost-effectiveness and availability for prosumers — consumer producers. Produced by award winning digital agency Cordon Media Inc. the Pinć VR headset is on crowdfunding platform indiegogo now. Pronounced ‘pinch,’ it has a unique input system that makes a nod towards the Leap Motion hand gesture interface. Pitched as a case accessory with a complimentary free app designed to “deliver the next level of computing to the mainstream via Virtual Reality”, you are going to need an iPhone 6 for Pinć.

As creator Milan Baic, President of Cordon, told The Verge: “We almost approached VR as an accessory. The Pinć prototype is only a couple of times thicker than the iPhone itself, and it’s meant to be as non-threatening as a headset can be, at a price point that’s not precisely a bargain but still less than the Oculus Rift or Gear VR.” In terms of being a bargain, Baic could well be talking about the cost of Pinć relative to other cost-effective DIY solutions such as Google’s Cardboard: a similar maker premise for Google Android, which unsurprisingly uses a cardboard headset, rather than a 3D printed one. Pinć is somewhere between the Facebook and Google VR offerings.

The Pinć app itself includes a shopping portal, keyboard, camera, photo gallery, video section and digital painting section. One of the key pitches of the platform is ultimately to advertisers. The augmented reality (AR) shopping experience caught the imagination of more than a few people, and virtual reality is the obvious sister to AR – combined, the augmented virtual reality interface offers many genuine advantages to the shopper, with pop-up onscreen detailed images, walk-through product demos and more. This is true for both internet shopping and high-street shopping.  Whether in the store, or at home, AR and VR can offer a significant set of advantages to the shopper.

Another key experiential feature of the VR headset as a smartphone accessory is in opening up the screen size when it is needed most. For visual applications the benefits are straightforward: a platform to significantly broaden the canvas for the camera, photo gallery, cinematic video and digital painting. “We see the opportunity for VR as much broader than just gaming. Areas like everyday computing, productivity and commerce are very interesting for us,” says Milan Baic. 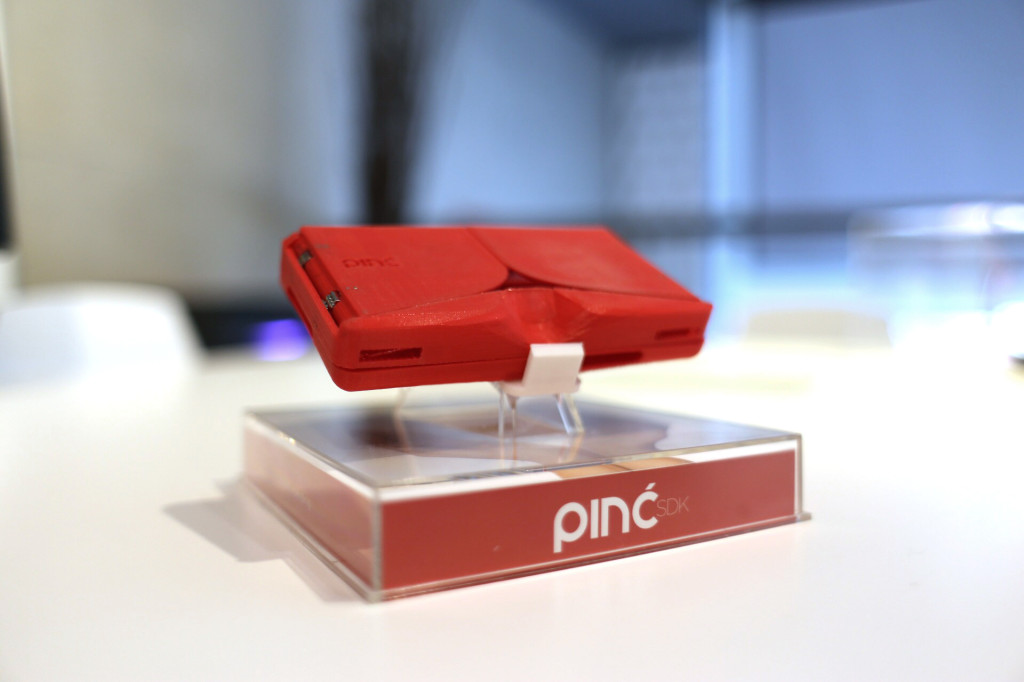 Pinć, as a product, is at prototype stage. It is not really fair to go much further into detail about the pros and con’ of the product at this point. As a crowdfunding project Cordon Media are appealing for your interest to get this neat VR concept off the ground. What do you think? Is this where VR, AR and 3D printing have truly successfully met?