OWL Nano is Stereolithography at .1 Microns

Yesterday is still a bit of a blur, but I can say that I did meet Donnie Liverman from the Virginia-based Old World Laboratories (OWL) and saw the OWL Nano™ in real life at CES. The OWL Nano is the newest stereolithography (SL) 3D printer on the market and what it boasts over its competitors, like the FSL3D Pegasus Touch or the FormLabs Form1, is its nanoscale resolution. 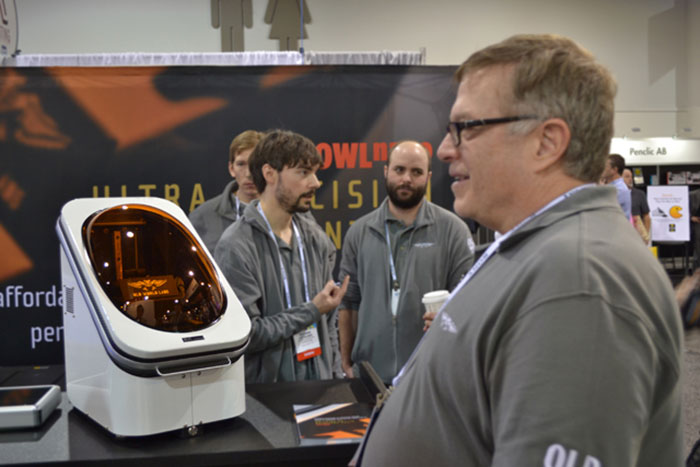 Donnie Liverman, in charge of the company’s sales, told me that the cost of the machine is $4,900.  o, though it may be a bit pricier than the Form1 and Pegasus Touch, you’re paying for a much finer resolution. Plus, Donnie told me that they throw in a hefty, but sturdy, carrying case at that price. Having seen the prints up close and personal, I think it might well be worth the price. The series of DNA prints, that grew smaller and smaller, were so fine that they almost inspired the meltdown in the previous Fear and Loathing post, but it was starting to exceed six pages, so I had to cut it.

At CES, we saw four different desktop SL machines, none of which were from 3D Systems. After the lawsuit that took place between FormLabs/Kickstarter and 3DS, which FormLabs would not comment on, and the settlement that proceeded, I wonder if it’s become clear that other businesses are okay to go ahead and make their own stereolithography printers.  If so, I feel like it’s evidence of the potential harmful impact that patents can have on the marketplace and development of new technologies. Without healthy competition, we might not have a company like OWL pushing the limits of print resolution in desktop SL machines.

[1] A word I just made up to represent the actualization of sci-fi concepts in this increasingly futuristic world.  Ok, so I probably didn’t make it up. I’m sure someone else came up with it light years before me.