Olaf Diegel, the man famous for designing 3D printed electric instruments, has come up with a new 3D printed guitar, which sings an ode to the Big Apple and the rest of the Land of the Free. The model is called Americana and the Les Paul-style frame incorporates visuals of NY landmarks such as the statue of liberty and a skyline of the city.

Olaf, being a part of the Cubify community, unsurprisingly used 3D Systems’ 3D printing equipment to bring the guitar to life. Even though it is a playable instrument, there are options to modify the design of the guitar according to the users’ needs. For example, pick-ups and necks are something that can be tweaked in co-operation with the artist himself. 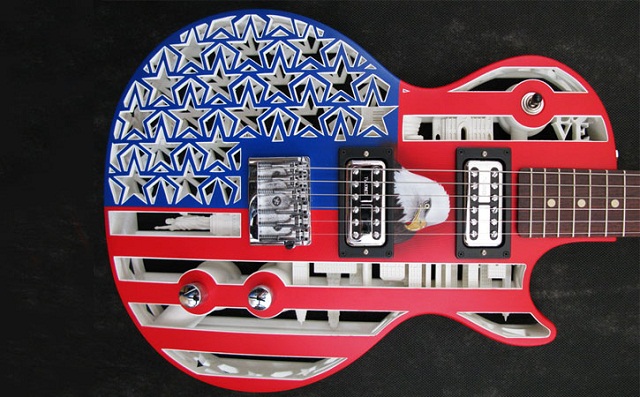 The Americana guitar is on display at the NAMM (National Association of Music Merchants) Show in Anaheim, CA, USA until the end of this week, so if you’re roaming around California looking for something to do, why not go and take a look? If the styling (and naturally the manufacturing method) appeal to you, the Americana is available for order and can be yours for $4,000 – hit the source link for more information.