Though there are a few DIY solutions for automatically removing parts from a print bed, the NVPro from NVBOTS is the only 3D printer I’m aware of with such a feature built directly in. And, now, the NVPro isn’t just available to the schools and enterprises previously given access by NVBOTS.  Today, the Boston-based startup has announced that the printer is available to the general public. 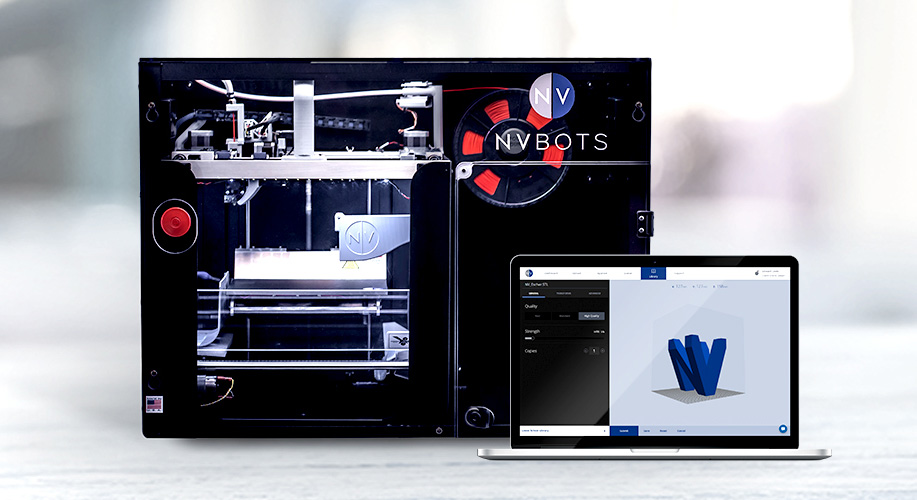 The NVPro is a unique 3D printer in that it has been designed specifically for institutional use, whether that be a school or a business. To optimize the system for this usage, the NVPro is cloud connected and controlled, with users able to 3D print from a single machine from the web.  Their files are uploaded to a queue, which is monitored by a local admin.  In order to achieve the greatest level of automation, however, the NVPro relies on an automated part removal mechanism, something for which NVBOTS has just received a patent from the USPTO. Altogether, the NVPro can work continuously 24/7 without the need for an onsite operator. While a host of schools and businesses have previously been using the NVPro for over a year, the system is now available to the public.

NVBOTS CEO AJ Perez says of the news, “Since our founding, NVBOTS has been committed to delivering on the impossible through 3D printing, while enabling each NVBOTS customer to turn their ideas into realities. Not only are we proud to announce the general availability of the NVPro, we take pride in the fact our customers are able to benefit from automated 3D printing technology that has been patented — making NVBOTS the only 3D printing company offering bona fide automated part removal.” He adds, “We have innovation in our DNA and with this release of the NVPro we are empowering our customers to deliver on their innovations more than ever before. Whether you are a business in need of a rapid prototyping solution or a school seeking to inspire your students though 3D printing, the NVPro is your 3D printing solution.”

Purchase of the NVPro includes a three-year warranty, as well as access to NVCloud, NVLibrary, and NVCare. NVCloud is the startup’s cloud-based software for online print management, allowing for remote access to and control of the printer from any device. NVLibrary includes documentation, curricula, lesson plans, and printable parts. NVCare is the startup’s complimentary training and support for NVPro customers.

Among these customers is startup accelerator MassChallenge, whose Managing Director, Scott Bailey, says of the machine, “MassChallenge empowers startups with the support they need to deliver on their innovations, offering resources in several different areas, including technology. Having access to a 3D Printing solution like the NVPro is particularly useful, based on its automated part removal feature. With the NVPro, we can maintain a steady queue of print jobs running, without requiring someone to retrieve parts each time they are printed.”

The general availability of the NVPro may be exciting to organizations looking for what appears to be a heavily automated 3D printer. Interested parties can contact the company on their website or, if you happen to be in New York, you can see the NVPro in action at Inside 3D Printing.