In Melbourne, the first commercial 3D printing factory in Australia has arrived.  The new 7 million dollar space is owned and operated by Objective 3D, the largest distributor of Stratasys printers in Australia.  The company also sells Artec Scanners and provides a wide range of services including engineering assessment, file interrogation, and fit for purpose analysis from RedEye Australasia, a division of Objective 3D.

Counting Holden, Ford and Boeing among their clients, Objective 3D decided to bring the competitive advantages they provide to other customers (such as global mining giant BHP and household appliance manufacturers Sunbeam and Breville) to rural and regional manufacturers in Australia.

The facility is 800 square meters and runs 15 different 3D printers in an industrial park in Carrum Downs on the southern outskirts of Melbourne. All 15 of the new 3D printers at the 3D Central advanced manufacturing center are industrial grade, costing between $10,000 and $800,000 each.

The momentum of low-volume manufacturing is spiking as the use of 3D printing continues to take hold in Australia, and after 30 years it is now finally cheaper than traditional volume-based production methods bringing customized design closer to widespread market acceptance and profitability.   3D printing is not even close to replacing mass-manufacturing products, but for a manufacturer testing a part design, 3D printing batches of test models and prototypes, or producing low volumes, it is proving to be a better way to save money in the developmental phase.

The Managing Director of Objective 3D, Matt Minio, said producing a custom car part, for example, may cost “just $20 or $30” for “a small knob or a button”.  Having spent the last 17 years of his career working first as a CAD designer for companies such as Boeing, Frigrite and Air International, moving to Business Development Manager for Intercad, accepting a position as National Product Manager of 3D printers for Tasman Machinery before he began at Objective 3D, Mr. Minio knows what he is talking about when he says, “”With a 3D printer, the day you finish the design, you can be manufacturing parts from day one, and manufacturing them a lot cheaper than traditional manufacturing methods, given that you don’t need any tooling.  And if we can make products for niche markets straight off the printer, we can produce high quality products, high value products, and that’s where Australian manufacturing really needs to specialize.” 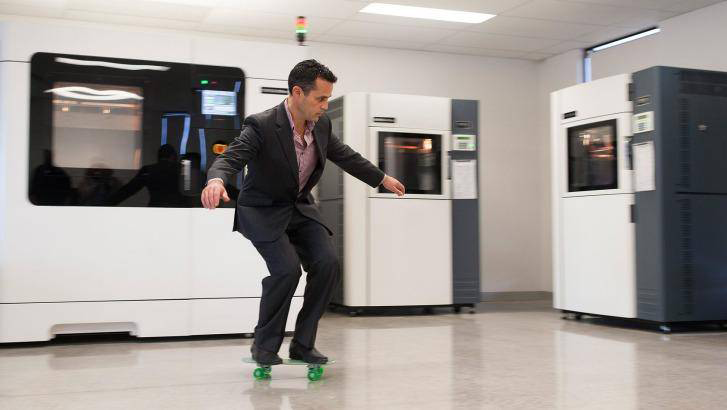 Manufacturers have a lot of enthusiastic supporters such as Mike de Souza, the Chief Executive of the Australian 3D Manufacturing Association (A3DMA) and Bob Baldwin, the Parliamentary Secretary to the Minister of Industry, who actually was apprenticing as a fitter-tool maker before he entered the political arena.

A3DMA is about to conduct the first-ever commercial design and print of an all-Australian women’s fashion garment, and will be engaging in construction projects revolving around 3D printing complex structures, as well as working with partners to begin experimenting with 3D printing food.   Starting next year, A3DMA will begin implementing educational programs in Australian schools as well as short-course TAFE programs.

And according to Parliamentary Secretary Mr. Baldwin, “Australia has some of the best and brightest design brains in the world, and if we can get their ideas into the market, ahead of the curve, what it means is we have the opportunity to capitalize on that as a nation.”