As the Professor of Geology at the University of Alaska – Fairbanks, Dr. Pat Druckenmiller has the distinct advantage of being  located close to the Liscomb Bonebed, a famous geological area known to contain one of the largest collections of fossilized dinosaur bones on Earth. For over eight years now, Druckenmiller has continued to teeter and sift away at the 3-foot thick composition of fossilized dinosaur bones, but the thousands of samples that have been found in the Liscomb Bonebead are much too complex to be sorted and reconstructed by human sight alone.  That’s why, when Druckenmiller discovered an entirely new species of dinosaur, Ugrunaaluk kuukpikensis aka the hadrosaur, he turned to Michael Holland and his museum exhibit-focused production company to use 3D scanning and 3D printing to recreate the duck-billed dinosaur that once grazed the North Slope of Alaska.

To restore the bones of the hadrosaur, whose discovery was announced just this week, Holland and Druckenmiller also called upon the 3D technology expertise of Ian Sayers from Peak Solutions, a Portland-based 3D scanning and 3D printing service bureau. Together, Holland and Sayers took the most complete fossil samples discovered by Druckenmiller and 3D scanned, mirrored, and accurately replicated the fossils into a completed model. 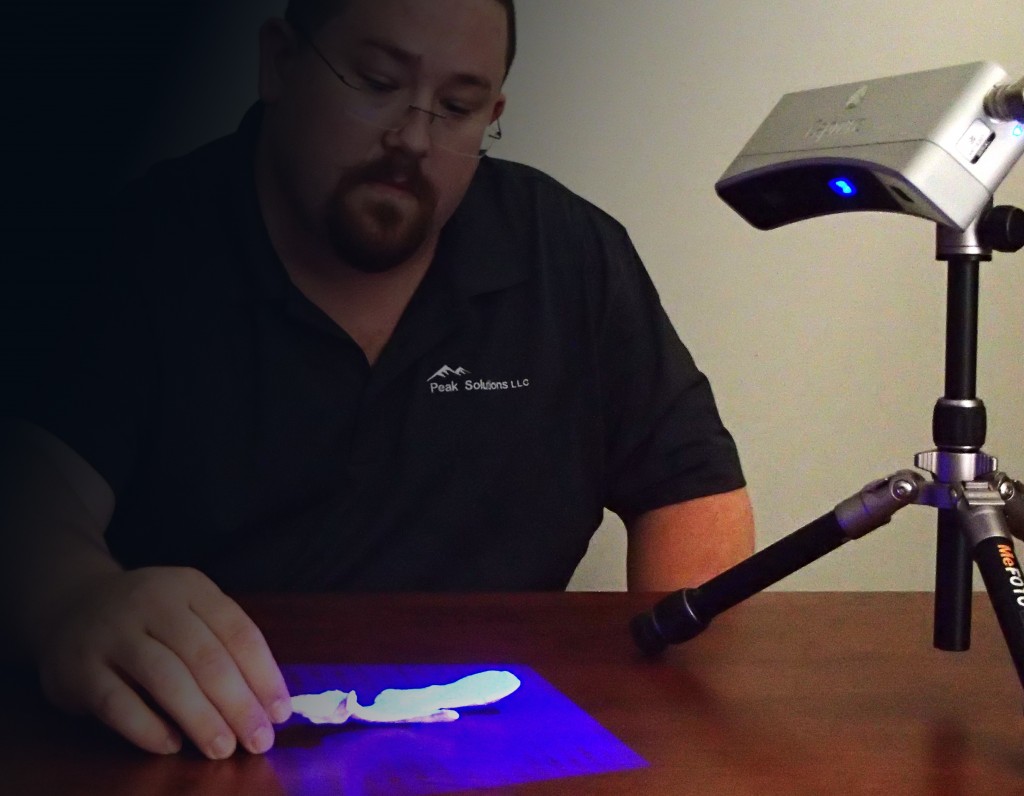 Taking just a few minutes to individually scan each plaster replicas of each fossil (rather than the fragile bones themselves) with 3D Systems’ Capture scanner, the team used the scientific approach of fully scanning the fossils in order to accurately replicate the dinosaur skeletons in exact form and size.  Holland, who has put together his fair share of museum exhibitions, believes that 3D scanning and 3D printing were the only way to truly create such a realistic and large-scale display. He says, “We could have estimated or been creative about what the skull looked like, but we would have had serious asymmetry and distortion if we did. The scientific approach was to take complete fossils in a 3D scan and be able to mirror and accurately replicate them. We could only do that with 3D scanning and 3D printing.”

The scan data was then processed and mirrored using Geomagic Wrap software, before being 3D printed with a 3D Systems’ Projet 660, with Holland saying, “The ProJet 660 produces hardened gypsum parts and this is an ideal surface to paint on.” After the dinosaur fossils were scanned and 3D printed, Holland and his team made resin casts of the reconstructed 3D dinosaur model, and painted the resin casts throughly to represent the texture and color that the fossil would realistically take on. 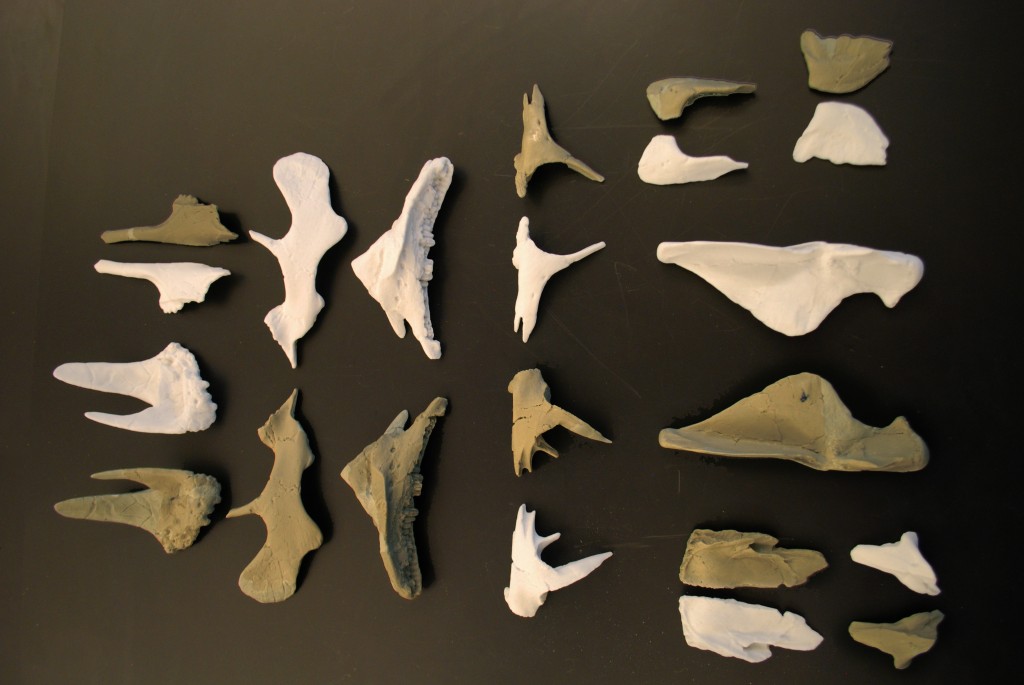 Holland decided that a hand-done multi-layer paint finish would best bring these 3D replicated resin casts to life. Using the resin cast of the bones and the 3D printed gypsum replica, Holland then turned Druckenmiller’s discovered fossils into a complete hadrosaur model by connecting it all together with a hand-fabricated steel armature wire that was implemented inside each of the resin casts. 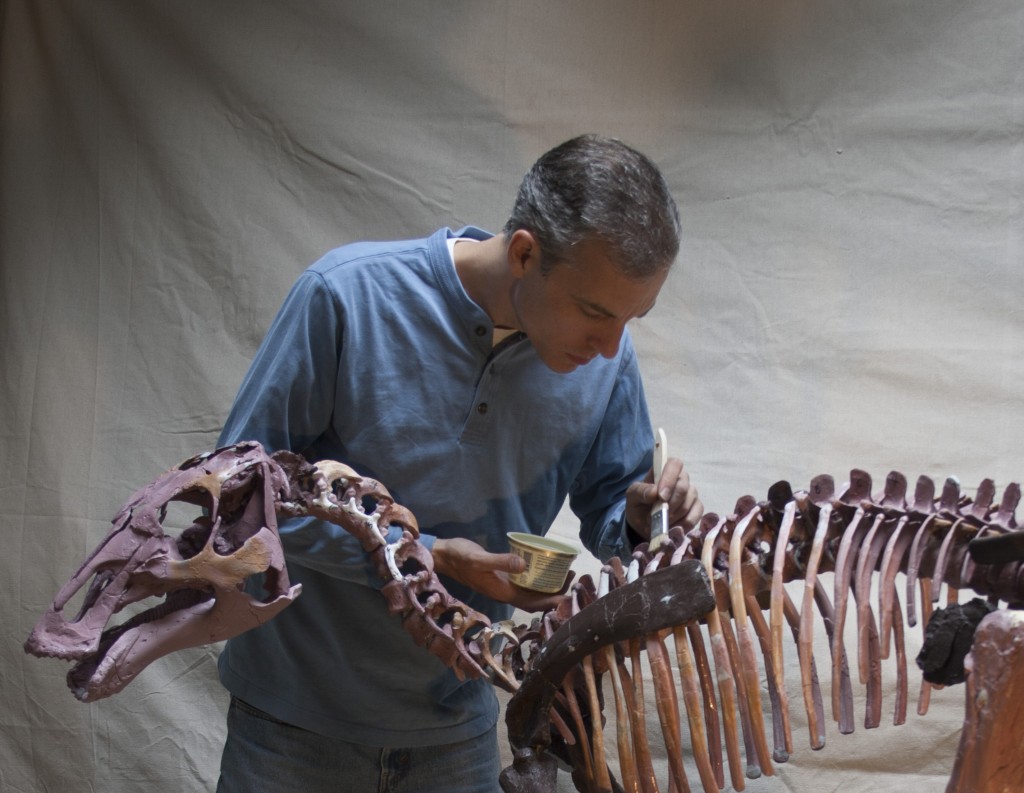 “This is a very cool and real example of how using new types of 3D digital scanning and printing is revolutionizing what we do in our profession – not just for display but for research overall,” says Dr. Druckenmiller about his and Holland’s project. “As a result, we are able to reconstruct a new species of dinosaur for the exhibit – faster than we ever could before.” 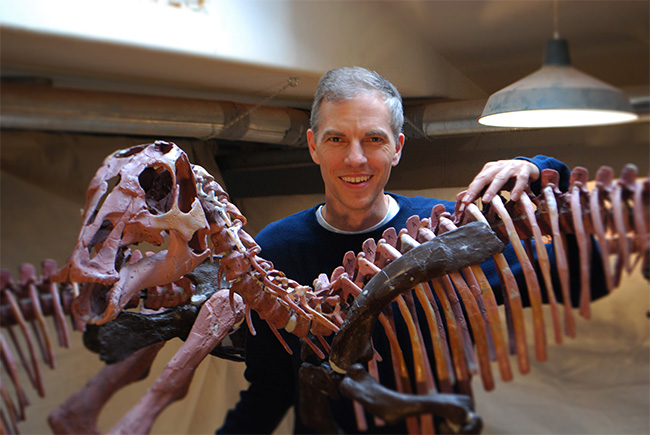 3D scanning and printing certainly holds a lot of potential impact for geologists and other scientific pioneers such as Druckenmiller.   This is especially true when it comes to restoring the skeleton of a completely new species of dinosaur.  Delicate and rare fossils can be accurately remodeled and reproduced with 3D printing technology in order to allow a more hands-on approach to studying and displaying natural phenomenons of the past such as the hadrosaur, allowing us to introduce a 3D printed model of a formerly unknown species into our very own Jurassic world!