Whether they are going to make it as a mainstream product anytime soon or not, 3D printers are evolving fast in many different directions. Delta FFF 3D printers, for example, are becoming faster, more precise, and capable of printing multiple and multi-material objects at the same time, like the Cybot 330 PRO, which has just been announced by the company by the same name.

With a build volume of 330 x 300 x 300 mm, among the largest for desktop 3D printers – superior to CubePro, Airwolf, Ultimaker 2 Extended, Makerbot Z18, and Witbox – offers several features that users have come to demand from a professional level machine, including: auto-leveling, a heated bed, dual extrusions upgrade, touch controller, all metal hotend, Wi-Fi connectivity, OctoPrint compatibility, a 3D scanning module, cloud printing support, moisture-proof filament storage, and compatibility with an external toolhead or E3D hotends. Many of these options are also available as separate upgrades, that can be purchased after the machine.

Its built-in Gcode slicing feature allows for cloud-based remote 3D printing through the use of Materialise’s 3DPrintCloud smartphone app for manipulating files and converting them into Gcode. This modular design also includes LSBP (Large Scale Batch Printing) as an upgrade option.  This system, which enables the printing of multiple objects simultaneously, will be released in Q4 along with Triple J Head Hotend Extrusions.

The use of a more powerful 32-bit processor enables the mechanical setup of the Cybot 330 PRO to run smoother and faster than current 8-bit architectures. This means that it can reach speeds of up to 400 mm/s (current top speeds stand in the 200 mm/s for Deltas), while maintaining the geometry of the 3D object, by using a high-quality sliding system and all-metal rigid chassis to dampen shocks. 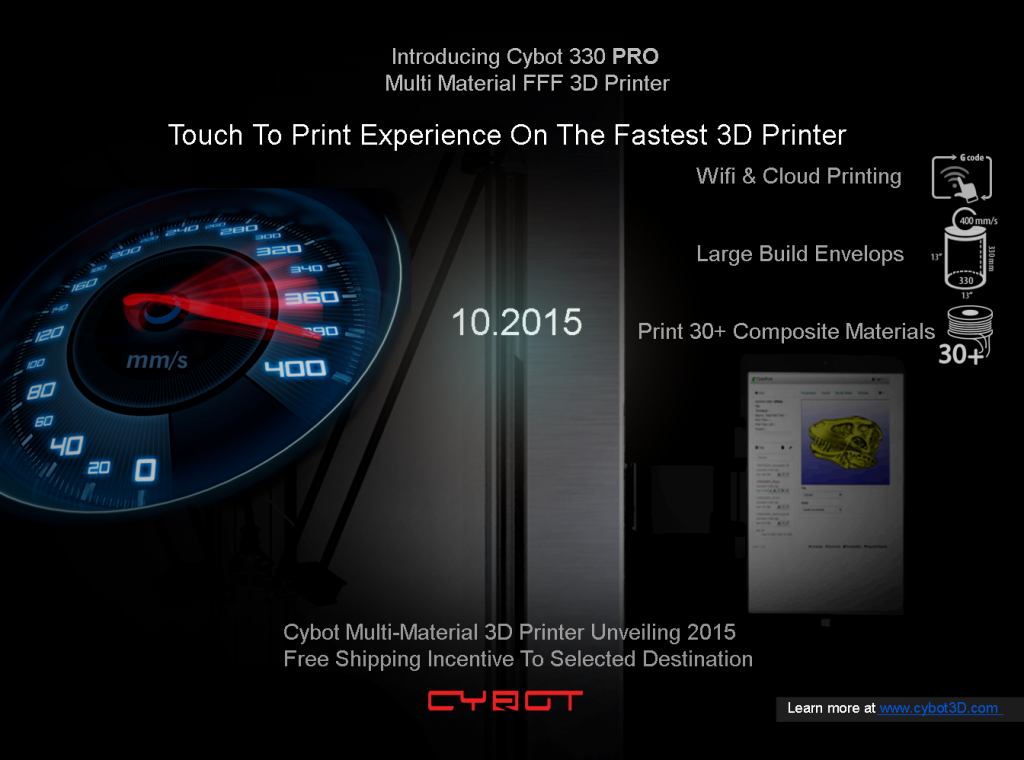 These speeds are also possible because the entire chassis is more stable than most comparable 3D printers, as it is made of industrial-quality, 304 stainless steel and aluminum extrusions, to withstand vibration and extreme heat condition. In fact, Cybot reports that the mechanical speed limit of the machine is rated up to 3000 mm/s. Cybot intends to further speed up 3D printing by continuing development of both the software and extrusion process.

By combining all features of the state-of-the-art of desktop 3D printing, Cybot intends to present one of the most advanced delta 3D printers on the market, and the best part is that it is expected to retail for less than $2,000, with free shipping to the US an Europe. 3D printing evolution is accelerating and projects like Cybot’s are making it seem as if it is just getting started.