From Nature to Art and Back Again: CT Scans to 3D Printed Animal Skulls

Here is a project that, while it is meant to frame nature as art, is also quite appropriate for the holiday. Scott Camazine is a doctor, biologist and artist who has turned to Kickstarter to fund the 3D printing of a variety of animal skulls. Now, some people might think of Scott as just another doctor who’s misusing the hospital’s CT scanner off-hours (just kidding!), but, really, Scott is turning his CT scans into 3D prints as a means of paying tribute to deceased animals, saying: 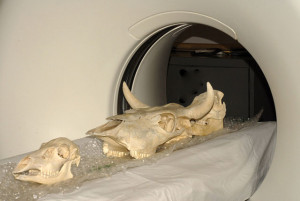 And, so, Dr. Camazine has gone about scanning Spider Monkey, Caiman Alligator and Black Bear skulls with a CT scanner to capture detailed 3D models, which he assembles and has printed in acrylic, stainless steel and bronzed stainless steel. So far, the doctor has used Shapeways for his prints, but is also in the process of using Ponoko and i.materialise to compare. His interest in the process of preserving dates back to his childhood, when he first learned about lost-wax casting. Scott began reassembling and casting remnants he discovered, such as fish bones and fetal pigs, and has, as an adult, turned to 3D printing. This not only allows for the creation of multiple copies of an object, without first making a mould, but it also preserves the original specimen. 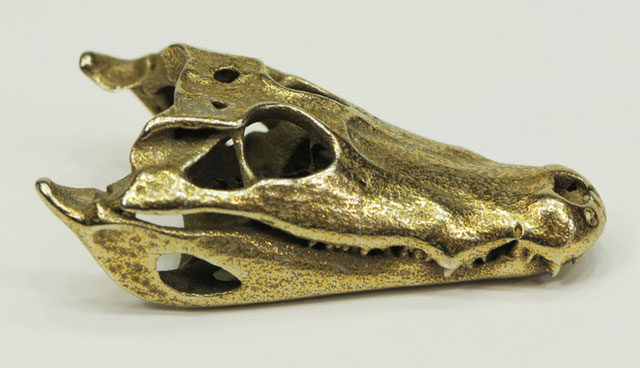 The doctor has already rendered 3D models of a few different species, but the Kickstarter campaign will help Scott extend his skull menagerie to include the following extensive list (so extensive that I couldn’t help but to include it in full!):

By contributing to his campaign, not only will you be help increase the library of 3D skulls that exists in the world, but you will help the doctor give back to the animals he so loves.

While Scott cannot state on Kickstarter that he will donate some of his profits to a given cause, as it’s against the site’s “cause-based funding” rules, he has told me that he will gift a portion of his earnings from the sale of these skulls to conservation efforts. When you purchase the skull or pendant of an animal marked “Endangered Species” from Scott’s website, he will give a percentage of the money to a cause for endangered species. Not only that, but Dr. Camazine may directly aid his own species, as well.

Scott, as a long time stock photographer with photos that have been featured on Wikipedia and in various magazines and textbooks, has a practice of giving his stock photos away free for use in lectures, school reports, or conservation efforts so long as they will be used non-commercially. Keeping up with that practice, he will also be offering his .stl files for free to schools for educational purposes, helping to inform students about the rich and complex biodiversity our world has to offer.

Below is the video for Dr. Scott’s campaign so that you can get a little more info about the project: