The injector, produced by Aerojet Rocketdyne, demonstrates the capabilities of this 3D printing process, which utilizes high-powered laser beams to melt and fuse fine metallic powders into three dimensional structures. NASA believes that this method, commonly and interchangeably referred to as Laser Sintering (LS) and/or Laser Melting, will diminish the costs of, and increase safety of, the rocket parts. The 3D-printed parts will be evaluated as part of the J-2X engine tests later this year, the upper-stage engine in the new NASA rocket). 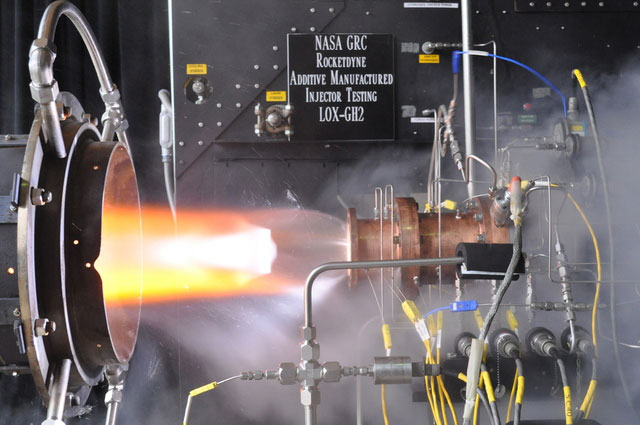 The process is being used to create parts for NASA’s Space Launch System, a new rocket intended for use with the Orion capsule, which will, according to plans, journey to Mars. Michael Gazarik, NASA’s Associate Administrator for Space Technology in Washington has said:

“NASA recognizes that on Earth and potentially in space, additive manufacturing can be game-changing for new mission opportunities, significantly reducing production time and cost by ‘printing’ tools, engine parts or even entire spacecraft. 3D manufacturing offers opportunities to optimize the fit, form and delivery systems of materials that will enable our space missions while directly benefiting American businesses here on Earth.”

This type of injector manufactured with traditional processes would take more than a year to make but with these new processes it can be produced in less than four months, with a 70 percent reduction in cost.

“Rocket engine components are complex machined pieces that require significant labor and time to produce. The injector is one of the most expensive components of an engine,” said Tyler Hickman, who led the testing at Glenn.

Glenn and Aerojet Rocketdyne partnered on the project with the Air Force Research Laboratory at Edwards Air Force Base, Calif. At the Air Force lab, a unique high-pressure facility provided pre-test data early in the program to give insight into the spray patterns of additively manufactured injector elements.

“Hot fire testing the injector as part of a rocket engine is a significant accomplishment in maturing additive manufacturing for use in rocket engines,” said Carol Tolbert, manager of the Manufacturing Innovation Project at Glenn. “These successful tests let us know that we are ready to move on to demonstrate the feasibility of developing full-size, additively manufactured parts.”

Some interesting links include: