The raw and industrial beauty of the urban landscape is in the eye of the beholder. This beauty – regardless of the individual stance each one of us has on the matter – is spreading all over the world and correlating with the demise of the old, simpler ways people in which people lived. Depending on the city, most would probably associate attributes such as large scale buildings, condensed living space, wealth/poverty, concrete, glass and metal when first thinking of metropolitan concentrations of living and working . I currently live in a new area of the relatively small city of Helsinki, so what first comes to my mind thinking about this particular city is the noise of the construction, the constant drumming of the pile driving by, all of which communicates a positive outlook for the future. However, there are naturally other sounds that have infiltrated the our cities, thanks to our obsession with mobile devices for speaking with one another.

Besides creating a world of sound all their own, cell phones can also be used to digitally capture glimpses and fractions of moments in time & space. Estudio Guto Requena and Galeria Coletivo Amor de Madre from São Paolo, Brazil, have used this method to record audio files from their city with over 11 million inhabitants and further developed the sounds into 3D models — of chairs. These chairs are appropriately called nóize and are based on sounds from different parts of the city. The recorded soundscapes are partnered and fused with classic design chairs to create new and quite mesmerizing forms for the furniture.

In the process of recording the sounds, which served as the fundamental elelement of the design process, the team recorded the latter phase of this artistic  AV adventure as well, which you can watch below:

Last month at the Sao Paolo Design Weekend, architect Guto Requena took the process phases preceding the unveiling of the finalized hybrid forms of furniture under the eyes of the visitors by collaborating with Meta-D to better showcase how the shapes are created – and concretized.  For this occasion, a previously created 3D model chair called the Girafa was combined with sounds produced by the visitors to and the facilities afforded for the design weekend. These sounds, infused with algorithms and effects, were then processed with Grasshoper and the results shown live to the audience in two distinctive forms – one as a projection on the gallery wall and the second as a 3D printed miniature, created with the South American native Metamaquina 2.

The relatively slow pace of an FDM 3D printer was probably quite appropriate to a project such as this, where the formation of the final piece of art had intrinsic value to be showcased to as large audience as possible. The earlier created 3D models of various location-base chair hybrids all looked very interesting and I wouldn’t mind having them in my house either, but for their fundamental purpose in life the means to functionally actualize them would require a platform a little larger than a basic RepRap sized 3D printer — but for as an art & design project, it kind of worked. 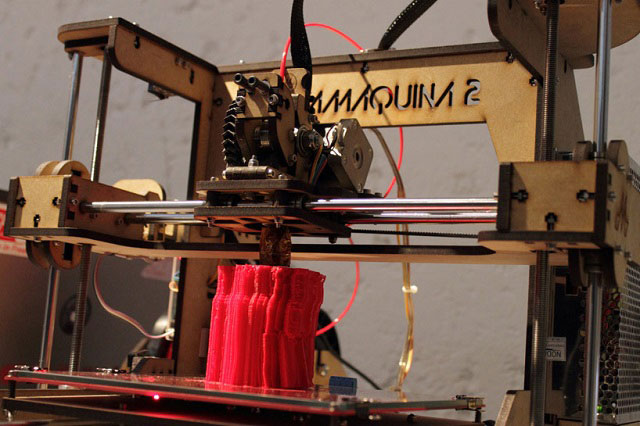