Most in the 3D printing community know that 3D printing is only the beginning, that additive manufacturing is only a component in something more to come.  A patent filed by iRobot earlier this year for an all-in-one 3D printing station described a machine that combined additive and subtractive manufacturing, along with some robotic arms that could manipulate objects within the workspace, to create a complete production solution. Due to the company’s fame, however, iRobot’s patent was just one of the more attention-grabbing stories about hybrid additive and subtractive manufacturing.  In actuality, if you’ve read previous 3DPI posts on the topic, the iRobot patent may be a representation of the future of 3D printing.

They may not be as sophisticated as iRobot’s machine, but, at least the MEbotics’s “machine shop in a box” and the FABtotum Personal Fabricator are much more than a bunch of fun patent sketches.  Indeed, the two distinct machines are real, tangible devices – one, perhaps more real than the other – that could move from the prototype stages to the production stages if they can get their separate crowdfunding campaigns off the ground. 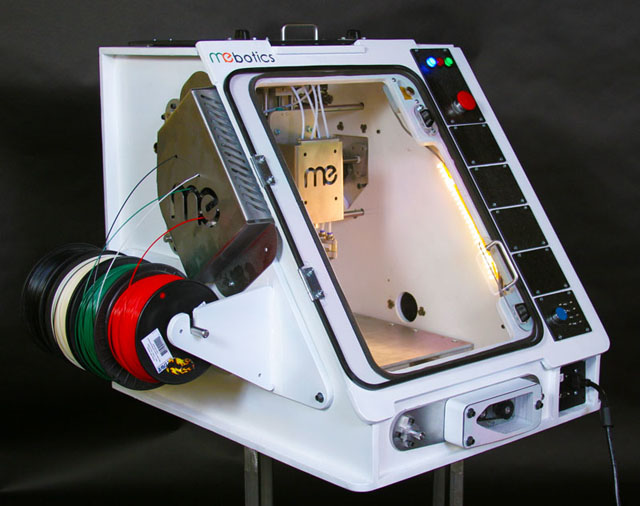 First, let’s look at the Microfactory.  Sure, the Microfactory lacks iRobot’s hypothetical robotic arms, but it does offer a lot of features that would make a number of Makers very happy. Primarily, the Microfactory is a combination CNC machine and 3D printer. So, with four print heads on two heater blocks and one spindle, the machine can both print an object and mill an object in a perfect marriage of additive and subtractive manufacturing.  And, because milling is such a messy process, with bits of material flying all over the place, the MEbotics team has included a hole fit for vacuum tubing so that the device can self-clean during the milling process.

Moreover, because there are four extruders on two heater blocks, they are capable of printing multiple materials and colours (not simultaneously).  As the Microfactory folks put it, “[the machine can] print a part in 4 colors of ABS or a part in 2 colors of ABS and 2 of PLA at the same time. While this is intended to be used sequentially we have run the machine making small parts where all 4 heads can produce the same thing simultaneously – there is an early, short video of this on our FB page.” So, with the Microfactory, it’s possible to produce an item made from one material in four colors or two materials in two colors, putting the Microfactory a step closer to providing an all-in-one manufacturing device.  If that isn’t exciting enough to make you want one of these things, then I don’t know what is (Maybe if it could learn to print metal?).  Watch their (potential) Kickstarter video below:

The thing about Microfactory is that MEbotics hasn’t launched the Kickstarter, yet.  FABtotum, on the other hand, already has their Indiegogo campaign rolling with $2,840 of their $50,000 goal met and 49 days to go, at the time of writing.  Like the Microfactory, FABtotum is a combination 3D printer and CNC machine. The FABtotum does not offer the same range of print color and material possibilities as the Microfactory, but may make up for it by incorporating a 3D scanner into the device.  In addition to its dual extruder/spindle head, the team behind this personal fabricator claim that it can produce both very small and very complex objects.

The FABtotum’s print head is also detachable, which means that, according to the campaign, one can attach “another subtractive or additive head on top, such as a more powerful motor, a small laser diode module for paper cutting, a pick and place clamp or a syringe for scientific applications. FABtotum could be even used for complex coil winding. Laser-cut parts, mill a double sided PCB or even do some 4-axis plasma cutting…” From watching their campaign video, it looks like it might be relatively easy to interchange heads:

So, you’ll have a lot of factors to consider when/if allocating your money around crowdfunding campaigns. The Microfactory has a slightly bigger work volume, wireless connectivity, and an interchangeable print platform for batch printing.  They’re both meant to be open source, so that you can take them apart and modify them and their software to your heart’s delight.  Both have an enclosed work area, to cut down on noise and mess.  If, like me, you only care about the way a thing looks, you have to decide between FABtotum’s sleek and “futuristic”, sci-fi look (as defined by Apple) and the Microfactory’s retro Star Wars appearance, my personal preference.  Maybe you’ll have a chance to check one of them out in person.  In Italy, you may be able to see the FABtotum at the Maker Faire in Rome, October 3-6, 2013.  In Massachusetts, you can check the Microfactory out at the Artisan’s Asylum hackerspace.

I’m restraining myself from using exclamation points in this post because they don’t become me, but what these machines represent is extremely exclamation-point-worthy. Joshua Johnson pointed out in his 3DPI post on the topic, that a hybrid 3D printing/CNC machine offers a lot of benefits: “I believe it is because hybrid devices can be used to improve the precision of parts prior to being enclosed by the FDM process. They can also be used to create threads, remove otherwise trapped support material or break moveable parts free from the surrounding matrix. In many cases it might just be faster to machine a complex part section rather than print it.”

And, according to MEbotics, Microfactory (and, I believe, FABtotum) represents a world five years from now in which consumers will have transformed into prosumers printing, milling, altogether manufacturing things in their own homes.  And, in five years, who knows? Maybe these two devices will be the start of a proliferation of 3D Printer/CNC devices, successfully joining additive and subtractive manufacturing into what might be called ∞ manufacturing.  Maybe there will even be grassroots army of ∞ machines fitted with their own proprietary robot arms and laser beams that give iRobot a run for it’s money.

Hat tip to Ralph Resnick, founder of NAMII and a highly active member of the NAMII Linkedin group, for the Microfactory lead.