FormLabs, the OEM company behind the Form 1 3D printer, has introduced a Mac-compatible version of its PreForm software. This development comes following many direct requests from Mac users that want to utilise the mightily successful high-res 3D printer. This software version is available immediately from FormLabs’ software page, is as feature rich as the Windows version, and all future updates will be released simultaneously for both platforms, according to the company. The one caveat FormLabs mentions is that this is its “first Apple release and we’re still making it better.” Therefore, any takers are invited to report any issues, requests or bugs via [email protected].

Alongside the Mac OS X announcement, FormLabs also reveal that the PreForm 0.8.4 release (for Windows and Mac) also contains a powerful new feature — automatic mesh repair, which integrates software from Netfabb. Henceforth, users will be able to run the software in order to clean up artifacts, close triangles and join vertices for even more reliable 3D printing on the Form 1.

They’re quite pleased with themselves and this update, illustrated with a before and after shot (see below.) Matt, one of FormLabs’ engineers, “punched a bunch of holes in a model he grabbed from the web” (courtesy of barney) to demonstrate the capabilities. “At left, the carnage; at right, after the repair.” 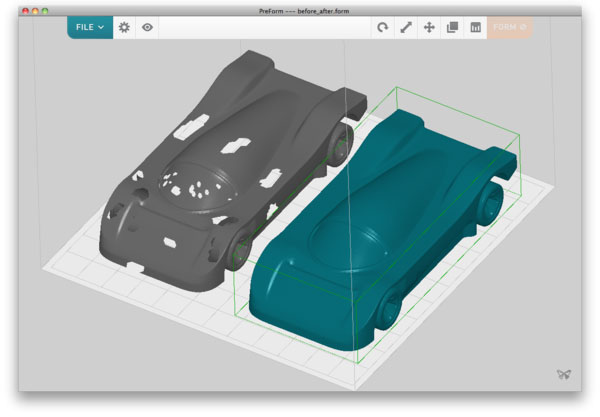