Two companies that are seriously ramping up their activity and their presence in the world of 3D printing are Ireland-based Mcor Technologies (manufacturer of SDL 3D printers) and Le FabShop based in France. The two companies recently announced that Le FabShop is to become an Mcor channel partner and will sell Mcor’s range of 3D printers in France. 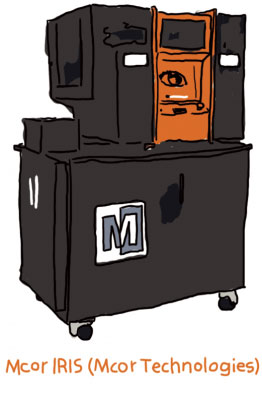 Le FabShop is based in Brittany and specialises in 3D modelling for digital fabrication, including the use of 3D printing but with a creation studio and showroom in Paris where they will showcase Mcor’s low-cost, full-colour, paper-based 3D printing technology.

Le FabShop’s Art Director, Samuel N. Bernier, has received global recognition for his 3D printed lamps while other projects include Le FabShop currently providing content for the Pavillon de l’Arsenal in Paris and other institutions.

“It is a great opportunity for le FabShop to represent Mcor; our goal is to be the French leader in personal 3D printing for professionals,” said Bertier Luyt, Le FabShop’s founder. “The IRIS and Matrix 300+ 3D printers will smartly complete our offering and open new markets for 3D printing and le FabShop in France.”

Le FabShop joins a growing number of companies who are taking advantage of Mcor’s recent partner initiative, which has seen phenomenal growth in their channel; “The number of partners has increased by 950% from July 2012 and as a result sales growth is about 544% for the same period,” commented Dr. Conor MacCormack, Mcor CEO and Co-founder.

Knowing both of these parties fairly well, personally I think it is a good match. And after spending time with Bertier in Paris last year and subsequently in Frankfurt as le FabShop started distributing the Makerbot 3D printer at the end of 2012, it is great to see things progressing so well. Talking to Bertier last week, it transpires that the reseller channels are only a part of the story. The original distribution partnership with MakerBot, according to Bertier, has proven the attraction of the brand and the interest in the technology and is bringing with it regular new opportunities. Not least the move to incorporate le FabShop, which has closed a first round of investment and is starting a second round imminently. This has allowed the company to undergo some serious recruitment initiatives and expand its facilities at the headquarters in Saint-Malo. The new ‘le FabStore’ — an online shop for 3D printing filament, parts, & accessories is also in the pipeline and will launch soon. And in September, a digital workshop, called le FabClub, will open in Paris aimed at young entrepreneurs, start-ups and small companies, but will also be open to all on a membership base.

So if you want to catch up with le FabShop in person, the team will be in attendance at Maker Faire Rome, the first French Mini Maker Faire in October, and, of course, the Paris 3D Print Show in November.