In the past year or so, there has been a wave of companies developing 3D printer add-ons meant to bring earlier generation 3D printers up to date in terms of WiFi connectability and remote control.  The list of such add-ons includes the Printr Element, the AstroPrint AstroBox, and the Sharebot Sharebox, all hoping to make previously WiFi disabled printers connect to the cloud and make the lives of 3D printer users easier.  The latest addition to the list is MatterHackers‘ new MatterControl Touch, a WiFi-enabled and Android-powered 3D printer controller.

The device is based on MatterHackers MatterControl Software, allowing users to create, edit, and prepare models directly on the MatterControl Touch itself.  After plugging the Touch into the printer with a USB cable and a simple set-up using the device’s walk-thru wizard, the printer can act as a stand-alone machine with all of the features, according to MatterHackers, listed below:

In addition to providing the MatterControl Touch as an add-on for existing printers, MatterHackers is also looking into including the as an embedded feature in newly manufactured machines.  MatterHackers CEO, Lars Brubaker, says, “Discussions are already under way with several manufacturers to include the embedded version in their new 3d printer models. We hope to empower the next generation of open standard 3d printers.” 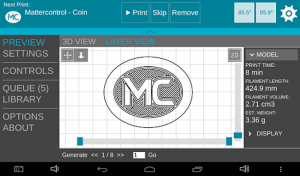 Kevin Pope, product lead for the Touch, described the benefits of the company’s new product, “Unlike internet-required solutions, MatterControl Touch still gives users the ability to do their 3D printing offline. We considered this to be an important option for schools and businesses – places where network situations can be complicated and security is a critical factor.”  He adds, “MatterControl for PC, Mac and Linux has nearly fifty-thousand active users and one of our objectives was to give those users an option to untether their machine without losing any of that functionality. In fact, when you throw in a built-in camera and wifi-capability the possibilities are endless – we are incredibly excited to keep evolving the platform”.

The MatterControl Touch is already available for purchase for $299, with an early bird discount price of $249 for the first 100 customers.  It’ll be interesting to hear what the community thinks of the device, but, either way, this is an interesting route for MatterHackers to take.  Rather than pursuing the manufacturing of 3D printers, of which there are plenty of on the market, the company has found a niche in 3D printing materials, software and peripherals.

The MatterControl Touch, which touts its ability to work without WiFi, also fits into a larger pattern in the industry that requires a much greater in-depth exploration.  I’m not exactly sure if the Touch and its technology are among them, but, as many of these WiFi-enabling devices find their roots in the open source OctoPrint platform, developed by Gina Häußge, I plan to write a piece devoted specifically to OctoPrint and the projects that have come into existence as a result of the open source project’s initial efforts. Look forward to that article soon!

For more info on the MatterControl Touch, watch the video below: