Tuesday January 27th saw the return of the Inside 3D Printing Conference & Expo to the small island state of Singapore. It is the second time that the roadshow has visited the Lion City, with the first taking place in 2013 and the write-up of that event located at this link.

This year saw an increase in exhibitors, with stalls representing both local startups and the usual array of international industry behemoths. In addition to the exhibitors, there were a number of keynote speeches, panel discussions, and other talks scheduled throughout the day.

The day kicked off with a keynote speech by Professor Chua Chee Kai, Executive Director of the Singapore Centre for 3D Printing at the School of Mechanical and Aerospace Engineering at Nanyang Technological University, who spoke of the importance of the growing 3DP industry in Singapore. Needless to say, Singapore is an “early adopter” of additive manufacturing technology, with the department at NTU having grown significantly over the last 25 years up to the point where they now have funding levels which would make some entire university budgets pale in comparison. Professor Chua has been at the forefront of this research effort in Singapore for the majority of that time, and is the single most cited scientist in the field of additive manufacturing, so it is no surprise to see Prof. Chua opening this event. (Disclosure: In the interests of transparency, I should mention that Prof. Chua is my supervisor at NTU, so I reserve the right to brag about our facilities a little. Now, on with the unbiased reporting).

Next up in the auditorium was a panel discussion entitled “The Future of 3D Printing in Asia”, which featured a panel of 4 industry experts discussing a range of topics ranging from sub-micrometer printing to the seemingly slow uptake of 3D printing by the medical community. After a brief Q & A session with the audience members, the expo hall was officially opened up to allow visitors to browse the stalls. 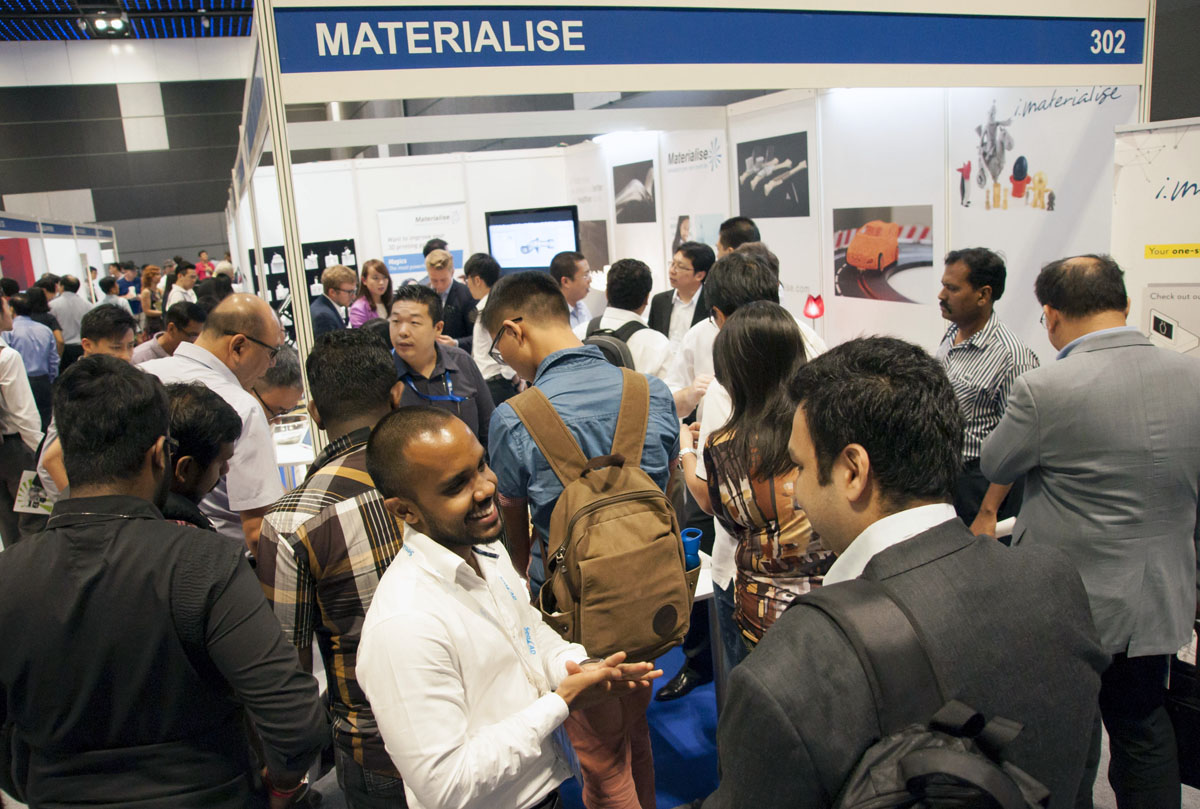 As mentioned earlier, there was a fairly broad range of companies with various services and hardware on show… too many to mention all of them in a single article. So, in Day 1 of my report, I will mention a few of the international exhibits and will cover the local Singaporean exhibitors in the next article (after I have spoken to them all on Day 2!). 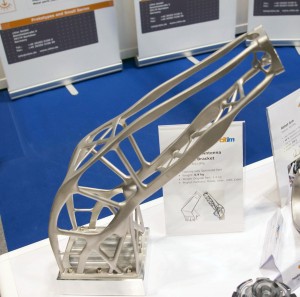 As my background is in aerospace engineering, I am naturally drawn towards things that look as if they should be fixed onto the end of a rocket and fired into space. And Berlin-based “Citim GmbH” caught my eye immediately with their display of metal printed components. The first item of interest was a metal antenna support bracket, to be used on the Sentinel-1 Earth Observation satellite from the European Space Agency. Manufactured in joint partnership with EOS, RUAG, and Altair, Citim have utilized Selective Laser Sintering of an AlSi10Mg alloy to achieve a lightweight part. Via traditional manufacturing, the component would weigh 1.6kg, but, with SLS, the mass was reduced to just 0.9kg. 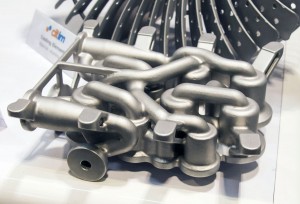 The second part of interest was a 1:2 scale model of a valve component for the Ariane 5 ME launch vehicle (rocket), which had been manufactured with the same AlSi10mg alloy. There were not so many details available for this piece, presumably as the Ariane 5ME is still under development and this piece may not be truly representative of the final one. But still, looking at the piece, one can tell immediately that there are mass savings generated from this method of production. The item looks like a wind instrument designed by Giger: a tangled, organic, spaghettified mess of tubes and fixtures. Presumably, the original, non-SLS part would have been composed of many different pieces, all fixed together with welds, bolts, and seals. This version is printed in one, tidy, mass-reduced part.

Onward to the big guns next. Roland had a new joint additive and subtractive platform on show, or, rather, two separate machines touted as a joint solution in a workshop. The monoFab ARM-10 is Roland’s latest SLS desktop 3D printer, and utilizes a UV light to cure an acrylic resin into a hardened, semitransparent solid. This system appears to differentiate itself from traditional SLS systems by use of the UV lamp (rather than a scanning laser), which allows for multiple parts to be formed simultaneously. And standing in Roland’s subtractive corner, weighing in at…well, not much (it’s very compact) is the monoFab SRM-20 desktop milling machine. This machine is designed for the milling of soft materials (not metal) so is perhaps best suited for prototyping out of foams and certain plastics. It contains the most recent version of the classic MODELA CAM software package, and according to the flyer that I picked up at the stand, can have its spindle RPM and milling speed altered mid-job, which offers better control. Did I mention that they both look pretty cool too?

Next up among the bigger companies were event sponsors Stratasys. Stratasys sent their General Manager of Southern Asia and Pacific region to speak to us before his afternoon keynote speech, so I will cover that interview and keynote in a later article. Although I will say that Stratasys had some interesting hardware on display, including a Babyplast micro-injection molding machine at the rear of their exhibition area. Stratasys have mentioned that they are still very much focused on R&D, but are also interested in building knowledge and cultivating a disruptive manufacturing ecosystem, which enables companies to retain a competitive edge. Presumably, that ecosystem is not restricted to additive manufacturing systems, but is also open to more traditional processes such as injection molding too, as seen with the company’s new Direct Manufacturing Division.

And that is the message that I am getting from today’s conference and expo: additive manufacturing is awesome, as we all know. But it certainly won’t be replacing traditional manufacturing methods anytime soon. Still, it can add value to a company in unpredictable ways, be it as a stand-alone solution or as a complementary process.

The final day of the conference will feature speakers from 3D Systems, Golden West Design Labs, and from usurped 2D printing king Hewlett Packard, who aim to be making big steps into the 3rd dimension. Should 3D Systems and Stratasys be worried with the entry of HP into the industry? Unlikely, says Stratasys. The fact that the HP giant is stirring indicates to Stratasys that they are doing something right. In any case, good strong competition is always good for innovation. And one thing that Singapore loves, is innovation. 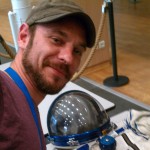 Phillip is currently studying his PhD at the School of Mechanical and Aerospace Engineering at Nanyang Technological University, Singapore. His background is in aerospace engineering, and his current studies are focused on the use of 3D printed components in spaceflight. He has previously worked at Rolls-Royce and Airbus Military, and has served as an intern for Made In Space and the European Southern Observatory. In his rare moments of relaxation, Phillip likes to enjoy the musical works of Black Sabbath and Rush. And being an Englishman, he also consumes a lot of tea.