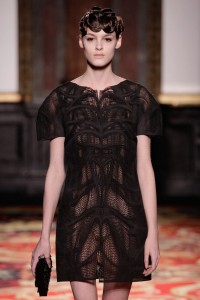 Materialise’s material development work, which is extensive, invariably makes an appearance within a real application before it is made universally available. The latest material R&D has been with a flexible rubber-like material, which was developed for the Iris van Herpen dress(es) we saw earlier this year.

Now, after two further months of testing, Materialise is making this rubber-like material available to users of its 3D printing services — on a trial basis, until 1st September. During this trial period, the rubber-like material will cost 3€ per cubic centimeter (plus a 5€ handling cost per model). As the gallery of images below shows, the rubber-like material can be used for a host of applications including accessories, haute couture models, designs that need shock absorption, squeezable models, gadgets and functional designs. Anyone guess which is my favourite ….?

Materialise states that the material has been tested in its natural form, but the company was not satisfied with the look and quality of the surface, however testing led to much improved results with black dye.

On a more cautionary note, the company does stress, quite openly, that it is rubber-like , and as such it is not as strong as real rubber.