Makerbot’s Entry into the Fashion Stakes – The Verlan Dress

Oh yes, it is another 3D printed dress! This one comes to you courtesy of a designer that has been here before, but also from a 3D printer platform that has not — Makerbot’s Replicator 2 — using a new flexible material, which, according to the company, is due for public release very soon.

As ever, Makerbot continues to push its boundaries, aiming to prove that there is nowhere a Rep 2 can’t go. The high-end machines of Stratasys’, specifically the multimaterial Connex capabilities have produced many of the ‘dresses’ seen on catwalks to date. However, when you think about it, could it be the Stratasys link that’s at play here? Or is it the geography? Maybe a blend of both?

Bitoni, with a studio in New York, was also jointly responsible for the 3D printed gown produced for Dita Von Teese, so his 3DP/fashion credentials are well up there. More recently he has been experimenting with desktop 3D printers to create custom designs.

According to Makerbot, in July, Bitonti led a three-week intensive interdisciplinary research project at Pratt School of Design’s Digital Arts and Humanities Research Center (DAHRC) called New Skins. During the course, students were given a unique opportunity to expand the scope of their skills by working with experts in the fields of fashion, art, architecture and computing to design and fabricate “second skins” for the human body. Makerbot, working and manufacturing in NYC, were heavily involved in the project, providing two Replicator 2 printers, copious amounts of the new flexible filament, (polyester-based) and a Makerbot trainer (for instruction and support). 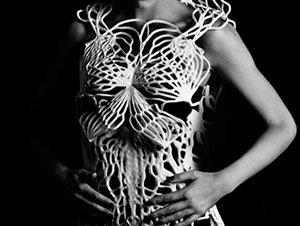 Working with a variety of software platforms, including ZBrush, Maya and Rhino, the students were challenged to come up with a fashion statement to reflect their design work. The result is the Verlan Dress. Really rather pretty even if a little whimsical, but I guess that’s the point. Practically speaking, it was printed on the two donated Rep 2’s using a combination of the new flexible material and the more traditional PLA. The machines were running pretty much constantly over a 2-week period to produce the dress in 59(!) parts, which were then assembled.

On working with the Makerbot’s, Bitoni said: “I was pleasantly surprised with how easy the Makerbots were to use. The quality was on par with any industrial 3D printed pieces we have commissioned previously. It was great to have them in the studio. [They] provided the students the ability to have immediate feedback on their designs by printing them during the design process. And using the new flexible material was really essential for us because we needed something that would be able to conform to the body and adapt to it as the body is moving.”

The design files of the Verlan Dress have been released on Thingiverse as both Blender and sliced .x3g files for users to modify, print and assemble as you see fit.