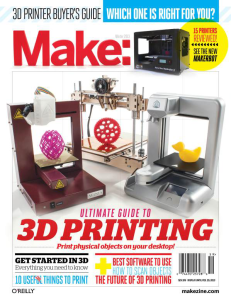 As we covered yesterday, Make: magazine, creator of the widely acclaimed and popular Maker Faire events, ran 26 3D printers through their paces to create the Ultimate Guide to 3D Printing 2015.  Make’s team of 3D testers identified the top performing 3D printers across nine classes, and the Afinia H480 was named the best in the “Reliable Performer” class.  According to Make, the Afinia H480 is “a solid bet for the third year running,” and, “its ease of use and continual upgrades make it shine.” The Affinia H480 costs $1,299.

Who wouldn’t be happy about that?  Sure, 26 printers is not every 3D printer out there.  At the Maker Faire at the NYC Hall of Science, in Queens NY, I met someone who wanted to test out every desktop 3D printer, which I think would really be fascinating (and expensive).  Anyway, Mitch Ackmann, Afinia’s President, had this to say about Make’s findings:  “We’re really happy about topping the Reliable Performer class, as it’s the number one thing that our customers require. It’s gratifying that we have been proven to be the most reliable printer of the 26 that were tested.”

So who does this test, and what does it consist of?

Apparently, a team of 15 “3D printing experts”, led by Anna Kaziunas France, Make’s digital Fabrication Editor, put the printers through a battery of rigorous tests to create side-by-side comparisons and identified the top performers. A PDF of the Ultimate 3D Printing Guide 2015, and pre-orders of the print issue, can be purchased through makershed.com for $9.99. The issue is also being sold at Barnes and Noble stores and on newsstands, starting November 25.

“2014 has been a full-throttle year for 3D printing since January’s Consumer Electronics Show (CES) introduced us to dozens of new machines. It’s clear that additive fabrication has caught the attention of major brands in all sectors and the push for the mainstreaming of this technology has hit a new plateau,” said France.

Make published the first-ever guide to personal 3D printers in 2012.  The Afinia H-Series won “Easiest To Setup”, “Easiest To Use”, and “Best Overall Experience”.  I think it’s safe to say, if you are inclined to trust Make: magazine, after 3 years in a row of winning, Afinia is a top choice for people who want to get involved in desktop 3D printing and the Maker movement.   But remember, the test itself is exclusive of hundreds of printers.  So who can really say for sure?

I’ve been hoping for a while that someone tests them all.