Made In Space 3D Printer Will Go Early

Here at 3DPI we have regularly updated readers on the progress of the Made in Space mission to send a 3D printer to the International Space Station (ISS). And of course, Shane’s excellent 3D Printing & Space series has considered the implications and potential future extrapolation such an achievement could mean.

The latest news from Made in Space in collaboration with NASA is that the programme is ahead of schedule, and the 3D printer is all set to head into orbit three months earlier than planned. This coming August in fact. The launch of the 3D printer was originally scheduled for November 2014. 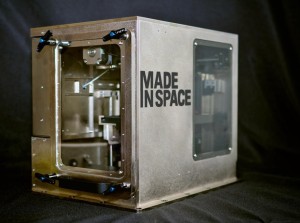 The 3D printer in question has reportedly passed all of the checks required by NASA, conducted at the agency’s Marshall Space Flight Center in Alabama over 20,000+ hours. The results have been pleasing and have met all of the requirements for use aboard the International Space Station.

According to Niki Werkheiser, the NASA 3D Print project manager: “NASA was able to provide key guidance on how to best comply with strenuous space certification, safety and operational requirements, and Made In Space excelled at incorporating that insight into the design. As a result, the hardware passed testing with flying colors. Made In Space now has first-hand experience of the full ‘A-to-Z’ process for designing, building and testing hardware for spaceflight.”

As a result the 3D printer will take its place aboard the next cargo mission heading to the Space Station, slated for August but no actual date is yet confirmed, by the private company SpaceX.

“The ability to manufacture on demand in space is going to be a paradigm shift for the way development, research and exploration happen in space,” said Michael Snyder, lead engineer and director of R&D for Made In Space.

The plan is to install the 3D printer within the space station’s Microgravity Science Glovebox (MSG), where its first job will be to 3D print a set of test parts and tools that will subsequently be sent back to Earth for analysis and to ensure final qualification of the process in its intended environment. If this final testing proves successful a permanent 3D printer will be installed in-situ aboard the space station.

“Passing the final tests and shipping the hardware are significant milestones, but they ultimately lead to an even more meaningful one — the capability for anyone on Earth to have the option of printing objects on the ISS,” said Made In Space CEO Aaron Kemmer. “This is unprecedented access to space.”