Visually, the closest comparison to the ZeePro Zim – a second Z-related 3D printer presented for your consideration – that comes to mind is the PandaBot. Pandabot was a 3D Printer that was cancelled on Kickstarter late last year and nothing has been heard since, despite claims the company was looking for alternative funding.

The Zim, however, while also looking for funding via crowd sourcing, is going great guns and is unlikely to suffer the same fate. This is probably because the team at ZeePro has taken a different approach with X, Y, Z motion — the stand out features include a dual colour printing head, an onboard micro-camera, smart device control and a refillable cartridge system. 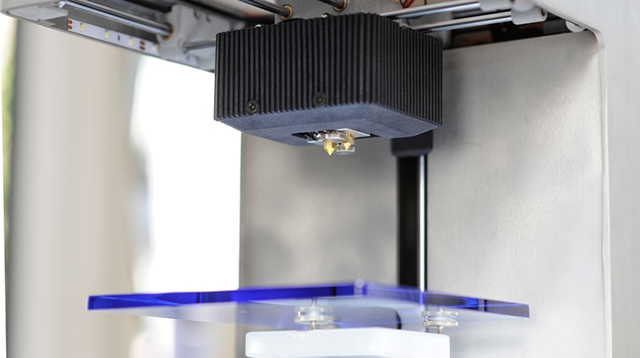 ‘Z,’ my memory drifts back. Seseme Street was on TV, the day’s Lego Moon-base building and strange looks from my family were complete, I was wondering why school taught me to pronounce the letter ‘Zed,’ whilst a brightly coloured monster was telling me to say ‘Zee.’ The Americanization of UK culture fascinates me to this day, along with ‘Morphology, Phonology, Syntax’ (a quote to spot…) and Noam Chomsky: father of modern linguistics, current critic of Google’s probabilistic interpolation approach to Artificial Intelligence, and, connecting the dots of coincidence, U.S. interventionism. Switzerland, with its Star Trek Prime Directive style neutrality, provides contrast to American interventionism, something very much in the global news as I write this. The Zim 3D printer, designed in Switzerland, eponymously, by ZeePro, of Stamford, Connecticut, USA, was introduced a week or two back and finally kicked off its funding campaign on Friday — at time of publication and 48 hours after going live, the campaign has received more than $53k in pledges from 75 backers.

The stats are pretty impressive, I’ll leave it to you whether to look at the interesting comparison table of its features compared with selected rivals that they have thoughtfully constructed to aid their marketing here. Single head Kickstarter pledges range from USD$599 to USD$699, dual head pledges from USD$799 to USD$899.

Zim’s automatically loading cartridge system will be a very interesting feature to see in action and test. According to the company, the cartridges will be available in a wide variety of colours, and Zeepro offers a refillable cartridge for those who want to use their own filament.

The micro-camera is a brilliant innovative solution to the relatively slow process of building up a larger scale object by FDM / FFF, allowing the user to check on the progress of their 3D print whilst on the go via an ethernet / WiFi connection to their smart device.

How practical is this? That’s going to depend upon how much you trust your 3D printer to not spontaneously combust, etc. As I’ve never heard of this happening, this, speculatively, may not be a particular concern for the vast majority of us. But, safety first, these words may be of influence, and I wouldn’t wish you to do anything other than think about your self-maintenance on such matters.

The recent ‘3D printers cause strokes’ study that did the rounds on the back of ‘Cody Wilson is trying to arm the world,’ should indicate that, whilst sensationalism in the mass media is considered a sales approach among certain publications, we all need to think about what we are doing with all the devices in our home. As the study concluded that 3D printers could be considered an equivalent danger in the context of ventilation as a deep fat fryer, the word’s ‘extractor fan’ and ‘open a window’ spring to mind.

Especially if you are 3D printing chocolate to deep fat fry…

The marketing release suggests ‘Zim fits in any home or office, and is easily portable.’  It may fit, but probably not sensible to leave it in the occupied bedroom of your child whilst you head to the coal cellar for example… Where do we draw the line on personal safety, personal responsibility, corporate & maker produce safety, and corporate & maker responsibility? It’s not for me to say, not here anyway.

All-in-all the printer looks good, has a very impressive range of stats, and doesn’t fall into the increasingly broad category of 3D printers that are being invented to offer slight variations upon existing models.

Recent debates across tech publications around whether open-source slows innovation down will be analysed in forth coming articles. One side of the debate pointing to Intellectual Property (IP) being beneficial to progress, as new ways of achieving an end result have to be formulated; the other that IP massively slows access to technologies that evolve into a range of innovative designs – such as the RepRap project has brought to fruition.

The reality is a hyper-complex mixture of the two, something I’ll come to when the volume of innovative new printers being released because of open-source FFF allows me the time to write about…

‘Zeepro was founded by an experienced team of engineers, designers and entrepreneurs. Zeepro has 12 full time employees with operations in both the US and Europe. The company has already raised USD$1million in its first round of funding.

We are a very enthusiastic, friendly and cohesive team! Most of us have known each other for years and have extensive experience working together. We aim to design and build the best personal 3D printers!

Zeepro is based in the US (US marketing in Connecticut) and in Europe (R&D in France, Design and European marketing in Switzerland).’