The cry from the crowd with limited 3D modelling capabilities as well as from seasoned modelling veterans eager to see the area bloom has been enough to convince companies that a profitable need really does exist. Convenient and novice-friendly 3D scanning is an obvious market for both manufacturers currently already in the 3D printing hardware business and for new start-ups specializing in the area alike. However, although the idea and process of scanning multi-dimensional objects is obviously nothing new, consumer-level applications with a sufficient quality-effort-price ratio haven’t actually penetrated the market deeply at this point.

Whether thinking about the most recent examples that are probably best known – Makerbot’s Digitizer and the upcoming Fuel3D  – at least one of the true value-adding elements is not on par level. For an average consumer, the current 3D scanners are either too expensive, difficult to use in the first place, require advanced skills in the SW (post-processing) department or produce results that are size or quality-wise, just not good enough. But doesn’t this all sound quite familiar? When thinking about it, even though Instagram and its kind plus the ever-improving optics in cell phone cameras have convinced many that they can produce professional-level photos with just a hit of a capacitive button, the basic problems are exactly the same in the world of 2D images as they are in the 3D universe. For a wedding photo or other unique event, a safer bet would definitely be to use a professional photography studio to capture that once in a lifetime moment instead of using the ubiquitous friend with an iPhone 5 and a large fanbase on Flickr. So why couldn’t this approach be applied to 3D images as well?

Enter Captured Dimensions, a company native to Richardson, TX near Dallas who contend this model definitely can and should be applied. Inside their studio, which you can see in the picture above, users can enjoy a moment in a literal spotlight and afterwards receive a 6-15 inch full colour replica of themselves, their babies, pets or other important creatures in their lives. The process is pretty much as simple as it gets. After scheduling an appointment and deciding on the choice between a detailed bust or a full-body replica and the size of the final 3D print, all that is left is to stand still for a moment in that special dress or the smartest suit from the wardrobe. Or trimming and grooming the dog to a showcaseable level. The internal process of Captured Dimensions takes about a month, after which the replica will be ready for pick-up or shipping. Below is a promotional video about the process, which also shows what the company can really do with their equipment. 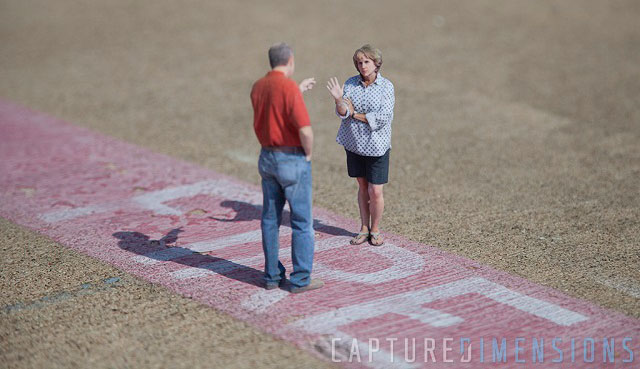 Even though the process is simple enough and doesn’t require any special knowledge from the aspiring models, using Captured Dimensions might lead to a situation perhaps best illustrated in the above image of a couple – some good old-fashioned domestic arguing about money (at least judging by the body language). The basic option is to get the full body figurine in 1/12 scale and that’s already a hefty $445. If size really does matter, the largest replica – that of 1/5 scale – will cost $2,295. I’m not sure about traditional studios’ prices, but this does seem pretty pricey to me at least. Of course setting up a professional level studio isn’t cheap and the (non-specified) company handling the actual 3D printing doesn’t come free, but perhaps the current price level is mostly justifiable to only real once in a lifetime situations, where the rational thoughts regarding the costs are justifiably pushed to the side – the results do look very intricate and professional.

So, if the cost is an issue or if you’re not residing in the greater Dallas area, Capture Dimensions might not be the most convenient solution for you at this point. What will be interesting to see is if this obvious niche in the market will in the future be taken up by traditional photography studios expanding their portfolio with an added dimension (and 3D modelling-literate staff) or by completely new studios focusing on 3D modelling and 3D printing alone. The need and technology is already there, so now it’s all a matter of finding the delicate balance between the perceived value and the costs for the target group users.