Kickstarting Man’s Ascent — A Sculptural Evolution From Analog to Digital

I have to admit that I’m not a huge fan of art on Kickstarter. It’s not so much that I have something against the art as it is about the art’s relationship to the fundraising platform. From what I’ve seen, crowdfunding usually only works for projects that will enhance the life of the crowd in some obvious way, with a technology that the crowd might get to use someday, or for projects that have widespread appeal.  So, a project seeking funding for a series of lenticular prints of William S. Burroughs will have less of a chance of meeting its goals than a 3D printing pen, simply because there are more folks who see the point of the 3Doodler than there are fans of William S. Burroughs hanging around Kickstarter. With Bill Westheimer’s Ascent project, though, I can admit that this is one artist that has a good chance of meeting his Kickstarter goal. 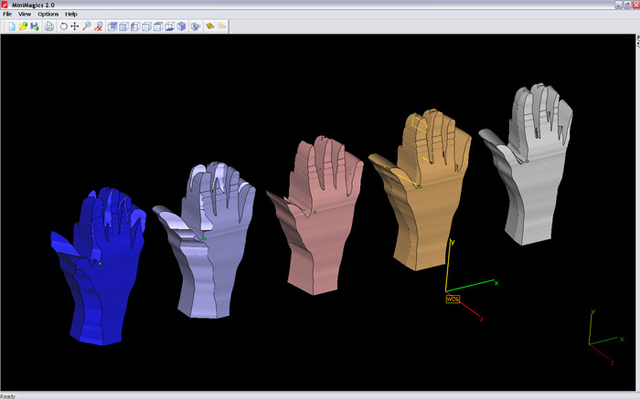 Professional photographer Bill Westheimer is seeking to fund an exhibition that proposes humanity’s teleonomic path through an examination of the hand and the thumb – that digit that separates the primates from the rest of the animals and symbolizes their ascension into ultimate evolutionary adaptation.  Bill first took photograms – photograph of the shadow of an object – of his own hand from different angles and, with the help of some CAD artists, combined those photograms to create a few 3D models of his hand, transforming his appendage from analog to digital. He then ordered a rapid prototype of one of the models from a 3D printing firm. Bill repeated the process with this sculpture, snapping pics of the sculpture’s shadows, thus causing further alterations in the original model through the photogramming and digitizing procedure and printing. He then printed the result.

Bill has, however, only printed four out of the proposed 20 transformations, each representing a further ascent into the digital world. His Kickstarter campaign goal is to help him fully capture the evolution of the human hand as we transition from analog to digital beings by covering the cost of the printer and materials, frames for all 180 photograms, marble bases for all sculptures, and shipping materials to send the art to various exhibitions. If you’re interested in any if the rewards such as a micro or full-scale sculpture of a model of your choice, you can donate here. And below is the Kickstarter video:

You can see from the models that he’s made, that the thumb, in the future, will become vestigial so that the human hand resembles more of a futuristic flipper.  While the artist does not explicitly outline the evolutionary path we are to take, I imagine something like this:

Bill’s project has all the makings for success. His costs are pretty clearly stated. He already has a portion of the work completed, so we have a sample of what the work will look like.  And he’s been a photographer for 30 years, meaning that he has a track record of successful projects.  Best of all, the project has nearly universal appeal.  It speaks to something in all of us – that thing that says, “What are we and where are we going?”  And it does so with a simple and universally recognized symbol: the human hand.