Earlier this morning, the enthusiasts and experts of the 3D printing world funneled through the doors of the Javits Center for Inside 3D Printing New York, intent to hear Carbon CEO Joseph DeSimone shed some light on the long-awaited Continuous Liquid Interface Production (CLIP) 3D printing process. His talk, entitled “A Future Fabricated”, was the opening keynote for the entire conference, and was perhaps the most anticipated of the innovative discussions taking place over the course of the week. Coming off the recent unveiling of their first commercial CLIP-based 3D printer, the M1, DeSimone gave an hour-long, information-packed keynote about the M1 printer, their specialty resin materials, the industrial applications, and what the future has in store for Carbon and the 3D printing industry as a whole. 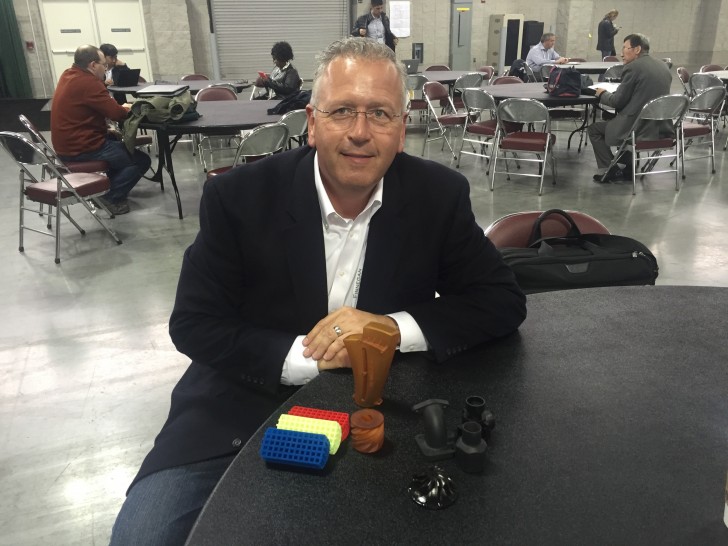 For those who are unfamiliar or uncertain about exactly how this CLIP process works, it can be quickly summed up as a  photopolymer resin-based puddle, the bottom of which is transparent to ultraviolet light, which causes the resin to solidify. Below the pool of resin is an oxygen-permeable membrane (what Carbon calls a “dead zone”), which prevents the resin from attaching to the window while the UV light is curing the material. What really sets CLIP apart from stereolithography is the fact that it is a continuous process, which helps to make the technology up to 100x faster than other commercial 3D printers on the market.

Backed with data and well-produced videos of CLIP in action, DeSimone went into the new M1 printer and beyond, also highlighting their subscription-based plan and data collection and analysis system, which allows Carbon to monitor and assist all customers with their prints. According to DeSimone, ‘light is the chisel’ for the Carbon team, and, with this light, Carbon is set to change the face of 3D printing as we know it. After the opening keynote, I had the opportunity to sit down and chat with Joseph DeSimone about their potentially industry-shattering technology. 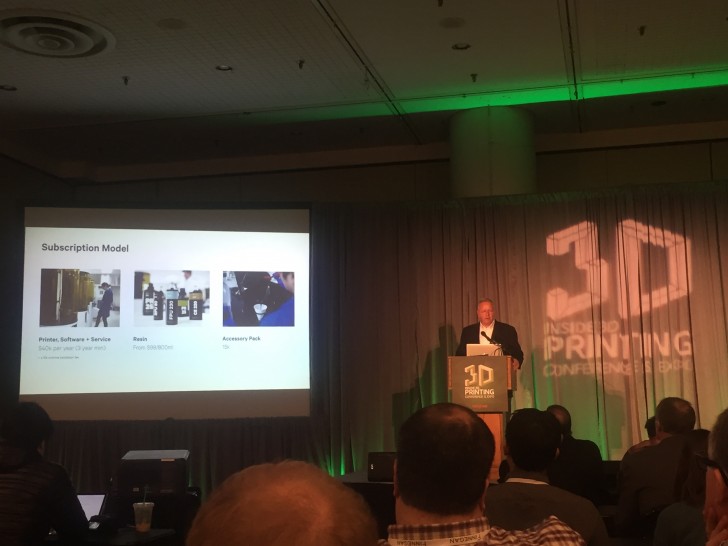 DeSimone, who has been running a polymer science program at the University of North Carolina for around 25 years, began by explaining to me where the idea for CLIP came from, and how he became interested in revolutionizing the 3D printing industry as we know it. DeSimone started, “If I wanted to coat this table with a UV curable coating and I put a 100-micron-thin layer on here and try to cure it with the light in this room, the very top surface would be uncured because of the oxygen in the air. So I’ve always been teaching strategies to get over this nuisance. Then, I began looking at how people have been doing 3D printing. There’s been such an enthusiastic interest across so many people over the last five or six years, so there was an interest to see what we could do in this field. Ss we began looking at it more carefully, we realized there were massive shortcomings. People do not have the properties to have real parts. It’s still slow,and it’s mostly mechanical engineers coming up with new and amazing ways of control.”

In order to achieve such a fast and high quality printing process, DeSimone and the Carbon 3D team realized that, unlike most of the industry, they had to stop looking at 3D printing as a strictly layer by layer process. With a background in chemistry, the team was able to formulate the CLIP process while maintaining isotropic properties, among other mechanically improved properties.

“We began looking carefully and seeing that pretty much everyone was doing layer by layer,” the inventor explains. “We thought from the onset can we do this continuously, and we wanted to do this with liquid because we’re chemists and we like the flexibility that liquids can give us. So we were faced with two possible directions, something that’s pulled out of a puddle or something that’s in a bath. We didn’t like the idea of a bath because it’s messy, especially if you wanted to use reactive resins. Wee wanted it to come out of a puddle. And how do you do that? How do you craft and object but maintain the puddle? Well, the oxygen does that for us.”

Although improving printing for actual production parts is a major goal in DeSimone and Carbon’s eyes, there are a few smaller steps that need to be taken first. In DeSimone’s view, improved functional prototyping is necessary to bridge the gap (or as DeSimone calls it, the chasm) between prototyping and production parts. He continues, “In the industry right now, no one really does manufacturing for polymers, so we needed to have a general purpose printer that can do any arbitrary geometry, and because the CLIP process is so challenging, the idea of having a robust chemical and physical model that drives the print button was essential to master. A lot of people want to jump straight to manufacturing, but the first step to manufacturing is having a really great functional prototype that works. We think this is a natural evolution, taking prototyping beyond just aesthetics and fit, but to performance and function too, that gives you confidence to move into manufacturing.” 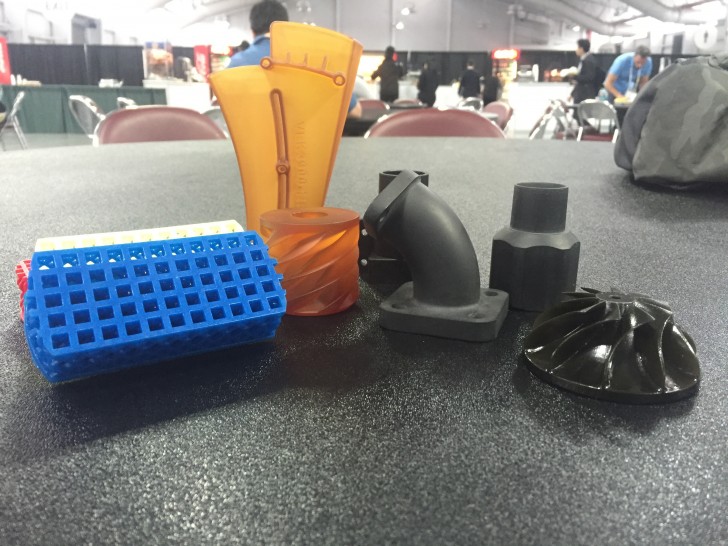 And while most enthusiasts are buzzing about the speed of this technology, that part came surprisingly easy to DeSimone and the Carbon team. For them, the difficult parts consisted of maintaining exceptional isotropic material properties. DeSimone says, “We always knew we could go fast, but what we needed to make sure of was that we had great material properties, highly accurate systems and something that’s scalable with manufacturing. Once you eliminate layers, you have isotropic properties, so it was really the key to eliminate layers. Take a lattice for instance, as this changes direction, even a simple build is changing direction relative to the build platform, so if you had layers cutting across instead of a vertical strut, the properties will change, which really screws up taking advantage of the mechanics of geometry if your properties were changing based on orientation. So, we know right away the isotropic properties were going to be an essential feature.”

In order to ensure that satisfaction and growth of their customer base, Carbon has decided to provide their M1 printer and services through a subscription plan. Not only does this help the CLIP technology become more affordable, but it also allows Carbon to streamline software updates, new materials, and more to their customers on a consistent basis. 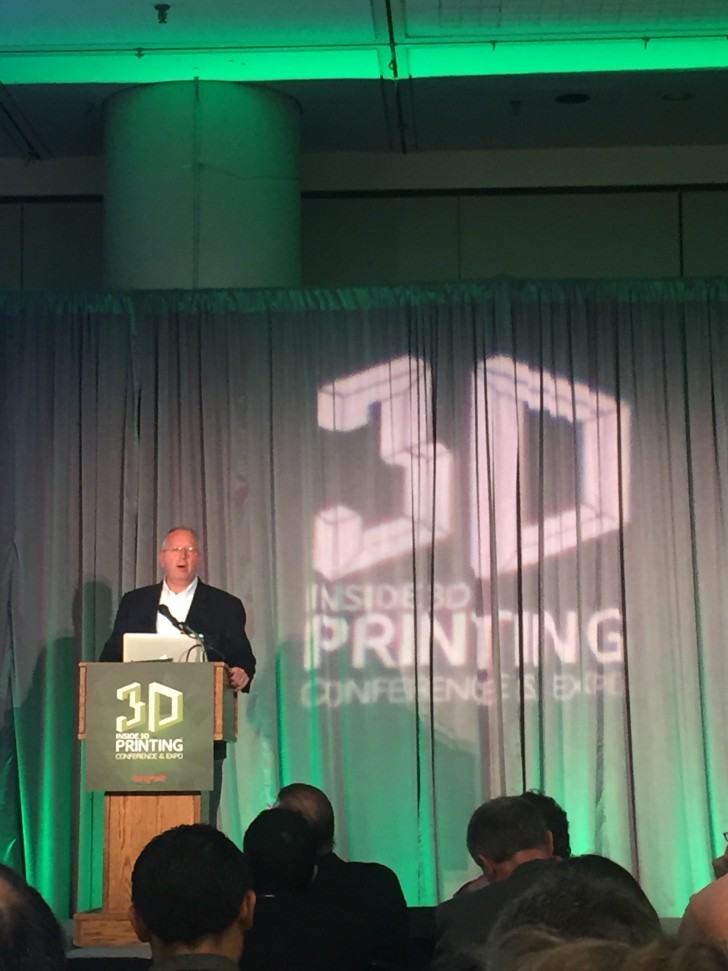 “The subscription plan is a game-changing model that allows a broader adoption and a data-centric ecosystem with network effects to emerge,” the CEO explains. “We can really drive a great business for our customers. Most importantly, it future-proofs our customers. There are so many things we’ve heard about people who buy printers that go obsolete. They bought the hardware, but then a new resin is introduced, and they need a new nozzle, and now they’re screwed. Our model allows us to future-proof our customers. They don’t have to worry about that now. Anytime we release a new material or software update, they get access to it, no questions asked. That’s a user experience no one has really been able to do in the additive space.”

DeSimone concludes, “Think about my Tesla. I get new features every month, better features. In analogy, our printer has new features on our software road map for better support software, software print management, better network effects, new resins, all of those thing keep coming to them. In a way, it’s appreciating in value with the constant software updates.”

So, there you have it! Not only is the Carbon team pushing out a potentially game-changing printing process with CLIP, but they’re also aiming to revolutionize how commercial 3D printing systems are utilized by various industries and 3D printing service bureaus. By offering an immense amount of customer and software support with their M1 printer and specialty resins, Carbon is ensuring that while they continue to improve and expand their products, their customer base will also improve and expand with them along the way.