According to a recent analysis conducted by The Verge, the odds of an Indiegogo campaign reaching its full funding aren’t that high. Only 9.3% of the 142,301 projects posted on Indiegogo have been fully funded, compared to the 44% of Kickstarter campaigns that have reached 100% funding – albeit the author admits that the Indiegogo number may be slightly skewed by “test projects”, according to an Indiegogo spokesperson.  Even though Indiegogo lets users choose flexible funding plans so that, if they fall short of their goal, they can still collect rewards, only about 20% of Indiegogo campaigns raise more than 25% of their funding goals.  This compares to 54% of Kickstarter campaigns, even though Kickstarter only offers the fixed funding plan so that, if the project falls short, donations are returned to their donors.

The author at The Verge attributes the lack of success faced by Indiegogo campaigns to the fact that Kickstarter has a strict screening process for projects, while Indiegogo does not, and because Kickstarter receives more traffic overall. Indiegogo’s co-founder Slava Rubin said in 2010, “We’re all about allowing anybody to raise money for any idea” and The Verge cites a statement from the crowdsourcing site that says “We don’t quantify the percentage of campaigns that are successfully funded because even if a campaign doesn’t reach its funding goal, it can still be considered a success.” 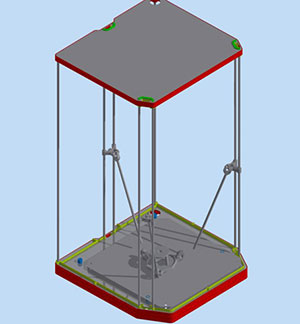 I am a fan of this inclusionary concept and a big proponent of the underdog.  At 3DPI we strive to be inclusive too and not to lose the little guy in the mix.  With this in mind, this article aims to bring a little more traffic to a project that may have been overlooked and in the interest of fairness to projects big and small, takes a look at Brazilian inventor Saulo Quevedo’s delta 3D printer/CNC machine, the Big Brother Spectrum.

Right now, Saulo’s Big Brother is but a series of designs, plans, and diagrams for a delta RepRap for which most of the screws, bolts, pulleys, and rails will be plastic. The Big Brother Spectrum, with a planned build area of 1,000 x 1,000 x 1,500 mm, is meant to function as either a 3D printer or a CNC machine by changing the printhead. If his Indiegogo campaign meets its $2,250 goal to purchase the parts necessary to build the printer, however, it could be the beginning of a successful franchise for a self-proclaimed fan of the show Big Brother, which also “refers to the big brother United States and its major contribution to the advancement of all peoples.”

At the time of this writing, the campaign has $0 in contributions, but donors will receive discounts on the final product, in assembled or as a kit, in the form of Indiegogo rewards with the most endearing names possible: a $25 donation gets you the “Good boy!”, $50 = “Big Boy!!”, $100 = “Angel Boy!!”, $500 = “Illuminate Angel Boy”, $1,000 = “My boy, my illuminate god!”, and $2,500 earns a reward simply titled “God exists”. One single donation of $2,500 could fully fund this man’s project while simultaneously proving the existence of God.  If that isn’t reason enough alone to fund the Big Brother Spectrum, then I don’t know what is. It’s got to be worth taking a look?

If it weren’t for Indiegogo, projects like Saulo’s might not get through.  As The Verge puts it: “Indiegogo is still playing second fiddle to Kickstarter for now. But as Kickstarter’s policies grow more draconian, we may start to see more projects debut on Indiegogo.”  The author is specifically referring to an instance in which Kickstarter removed a campaign for rewarding backers with genetically modified glowing plants. Luckily, we still have Indiegogo to stand up for the little guy.