London’s iMakr has been voted the third best electronics store in the British capital on Foursquare and was the only non-Apple store in the top eight!

Foursquare is a popular app with young  professionals and its rating systems matter, whether you’re looking for the best local restaurant or, indeed, an electronics store. iMakr was a rare intruder on an Apple-dominated top 10 and the only other stores to make the cut were the Leica store and one solitary PC World.

Here are the top 10 electronic stores in London, as voted by the Foursquare members:

Clearly, then, iMakr has had a massive impact to intrude on Apple’s territory like this. While others have tried and failed to establish a physical 3D printing presence on the high street, the iMakr stores in London and New York have become blue riband locations for the industry as a whole.

A seal of approval for every piece in the store

They’re places that you can actually see some of the world’s best 3D printers, scanners and filaments in action. iMakr’s team of engineers test every printer, scanner and filament, too, so anything in the iMakr store has the company’s seal of approval.

That brings enthusiasts from far and wide to see the latest technology in the flesh.

3D printing is a brave new world, but that can make it as hard sell with the general public. So the chance to get up close and see the printers in action, as well as talk to experts who can help guide a novice through the maze, has made the iMakr store a firm favourite.

The pure novelty factor means that some come just to see this new technology, while others want to get started on their additive manufacturing adventure.

Visitors to the store in the heart of London’s design district in fashionable Clerkenwell can also get an extravagant souvenir now that Mini-YOU is now in store. This advanced 3D scanning and printing system means you can have a sandstone figurine of yourself ranging from 6.5 to an impressive 15 inches in height.

A range of services

With free training in store, a printing service for one-off jobs or limited runs that don’t require your own unit and even 3D printer rentals, the iMakr store is fast establishing itself as the go-to authority in London.

Apple has an established reputation and undoubtedly has some of the finest electronics stores in the world, but iMakr is closing the gap. It has focused on creating an experience with the physical stores, rather than a simple shop.

Inevitably iMakr has a strong internet presence, too, which means it is free to turn these shops into a brand awareness and PR exercise, as well as a simple point of sale. 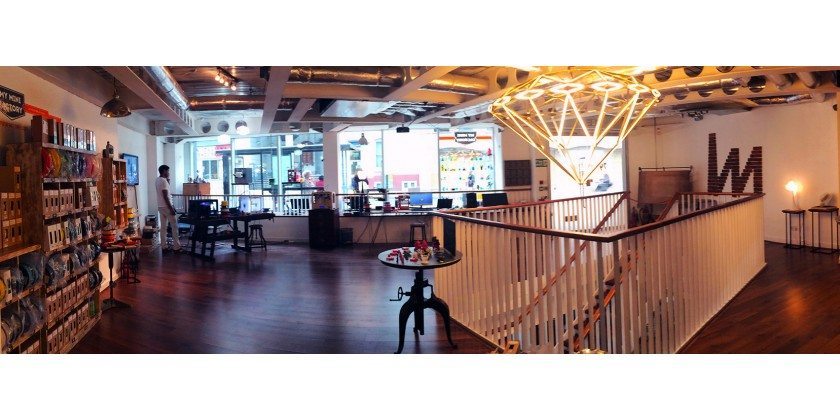 If it can establish the same kind of hardcore fanbase as the Apple stores, as well as the mainstream appeal, then iMakr’s future is assured.

New company CEO Eric Savant is a Wharton Business School graduate with a background in marketing and branding. He understands the value of these stores to the brand and wants to make them pillars of the iMakr community.

Creating a cohesive link between the premium outlets and the vast online MyMiniFactory model database and design academy is one of the bigger tasks ahead. The London store’s burgeoning reputation can only be an asset.

Others have already fallen

It’s the only shop that really has made an impact, too. Last year the Makerbot store closed in New York and that led some media sources to proclaim the death of 3D printing in physical stores.

iMakr has continued to prove this theory wrong with its flagship stores in Manhattan and London. A recent industry event at the London store was the first of many. The Digical Show that runs from Sep 30th-October 1st promises to be one of the highlights of the year.

This two-day event will bring exhibitors, industry insiders, designers and the general public to the heart of London to discuss advances in 3D printing. It’s a chance for everyone to see just how far additive manufacturing has come and just what it can do for them.

The iMakr store is going from strength-to-strength. So if you’re in London then pop in and see what all the fuss is about for yourself.