How 3D Printing fits into My Chosen Career of Model Making

Amanda Darby is a freelance sculptor, model maker, CG modeler and 3D printing specialist. She is based in Bristol and works with a wide range of companies across the UK. Here she shares some of her experiences of the model making world she lives and breathes and how 3D printing has proved to be an enabling tool within that world.

I have spent most of my life in a workshop — sculpting, making models and mould making. It will not be too surprising to learn, then, that as I came of age I chose to focus my career in this direction and these days I spend much of my time making models for television and film and I love what I do.

I grew up in a family of engineers — my father is an engineer and pattern maker and from him I inherited a respect for craft. As a child I would often sculpt something — either seen or imagined — and then my dad would guide me through the moulding process and the various steps required to get a finished figurine in metal. I don’t think I ever considered being anything other than a film model maker for a minute, which, for a kid from a small town in the North East of England was a little quirky to say the least!

The ability to come up with an idea and to get it through to a finished product has always fascinated me and the process itself excites me still — the ideas, the techniques, the skill development and all of the ups and the downs entailed in that process.

Working on film and television model making projects can be challenging to say the least but that is a part of what makes it so exciting. The overall process usually begins with me working with directors and getting to grips with their vision. This kicks off a typically lengthy design process where I am normally working to a brief and spending not an inconsiderable period of time in complete panic and excitement, trying to work out how on earth I am going to get the thing(s) made. Usually working to tight time frames and even tighter budgets. But, I love it when I’m given something that sounds impossible …. call me crazy, but that’s exactly why I love my job!

My approach to 3D printing is similar. 3D printers are a tool, a fantastic tool it has to be said, but a tool nonetheless and part of a much wider process. No 3D printer can create things on its own — it needs artistic input, an operator that understands the parameters of the 3D printing technologies and, usually a considerable amount of skill once the parts are printed to make them usable or for them to be properly finished. Over recent years, many 3D printing processes have been speeded up and improved with developments that really contribute positively to the entire model making process.

For me personally, though, one of my major concerns has always been that the wrong emphasis will drive the development of 3D printing technologies. Just because it is possible to use a certain tool to do a job, it does not necessarily mean that it is the right — or the best — tool to use. After all, you can use a hammer to put a screw in the wall … but a screw driver is much more effective!

My experience as 3D Printing Supervisor on the film “Pirates – In an Adventure with Scientists!” (Aardman Animation & Sony Pictures) has given me extensive knowledge of Envisiontec Perfactory 3D printing systems. For that film I researched and set up the 3D print department, which ran four Envisiontec Perfactory machines around the clock. It was an intensive learning period, over a five-year project. The Aardman in-house 3D printing pipeline involved ZBrush and Maya artists, model makers and traditional stop motion animators, all working together, producing more than 7000 3D printed interchangeable parts for the film.

After the film finished I began working with a 3D print bureau, IPF, focusing on developing the attributes of 3D printing in and for the film industry. IPF has both Envisiontec Perfactory and Objet systems in house. I have spent the last year researching and developing areas that 3D printing can work for the film industry, alongside traditional artists and model makers. There is such a wide variety of 3D printing machines on the market, each with different materials, build volumes, bed sizes and post cure processes. And instead of defining one machine that was perfect, what I discovered was that every 3D printing process had its own specific functions that were particularly relevant to certain applications — there is no one solution fits all.

Departments and supervisors often need to fulfill different applications, so one minute I will be talking about large set pieces, which would be textured or hand finished after print. Then the next minute I would be talking about body armour or weapons that needed to have a high level of surface detail and be usable almost straight from the machine, with very little sanding before painting.

Each of these applications lend themselves to different 3D printing technologies. For the best (most cost-effective) results the creative process needs to push towards the correct and most efficient technology available.

Companies like Propshop, based at Pinewood, have had great success recently using Voxeljet technologies for props and set pieces. The amalgamation of CG and traditional skills has opened up new possibilities. Voxeljet technology has enabled much larger, cost effective parts to be printed. At IPF we have been very successful in using Objet technologies, especially the Objet Connex 500, to print props, armour and weapons. The “Krypton Green” ABS-like material has high strength, light weight properties that work especially well for one-off hero parts or costume pieces. The high level of detail and good tolerance enables parts to fit together straight from the machine, with very little post finishing, which helps with meeting deadlines.

To sum up, I am very excited about the future of 3D printing in the film industry. With the range of talented artists now involved in the process, and gaining insight and understanding of just what is possible, I am eager to see what is created next! 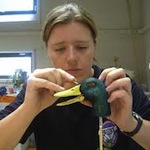 Amanda Darby is a freelance sculptor, model maker, CG modeler and 3D printing specialist. She is based in Bristol and works with a wide range of companies across the UK. Here she shares some of her experiences of the model making world she lives and breathes and how 3D printing has proved to be an enabling tool within that world.