“Imagine”, this is the word that adorned the face of the +1000K machine when it premiered at Automate 2015 in Chicago last week. The +1000K is a new type of large format metal 3D printer, built to produce massive ideas but in a less expensive, faster, cleaner, safer, and environmentally friendly way. Large-scale metal additive manufacturing is a huge area for growth within the industrial manufacturing world and so many industries stand to benefit from an easier-to-use and more efficient metal 3D printer. 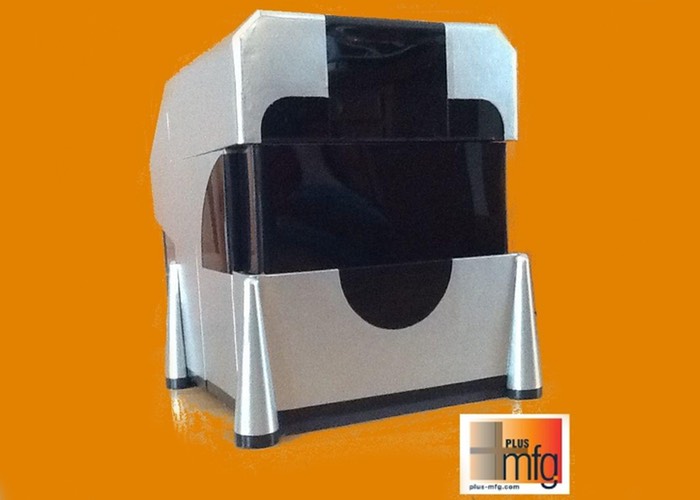 Jim Blackwood and Tom Kruer, Co-founders of Cincinnati’s start up +Mfg (Plus Manufacturing), have a big imagination and are stretching it to its limits with the +1000K. They have been working alongside their development partners, Parker Hannifin and Miller Electric Mfg, on the pilot for two years and are still hard at work getting their machine on the market. The +1000K unveiled at Automate 2015 is pretty impressive, with a build volume of 600mm X 900mmX 1200mm, which is huge, considering the +1000K’s compact size. This machine is able to print using multiple metals at a rate of 2kgs an hour in a single run. At the moment, the machine prints both steel and aluminum, but Blackwood and Kruer are working to expand the kinds of metals the +1000K can process before delivering machines to customers.

How did they do it? +Mfg LLC patented what is called the Arc Metal Deposition (AMD) process. Technical jargon belies a very simple process in which they turn the knob up to eleven, feed it through a computerized additive manufacturing machine and produce some serious heavy metal. In less poetic terms, the machine most likely uses an arc welding process, given the term used by +Mfg, but the rest of the details are still kept under wraps.  They do say that, with their method, what takes traditional manufacturing several months to produce can be completed in a month, a weeks, or days.

+Mfg LLC spokesperson Paul Saleba, summed it up in his presentation at the Automate 2015 start-up competition, “The benefits of additive manufacturing, particularly our AMD process, over casting, forging, and cutting parts out of billet is a gamechanger.” Though he is so far from being the first to utter the words “gamechanger”, the proof will be in the pudding.