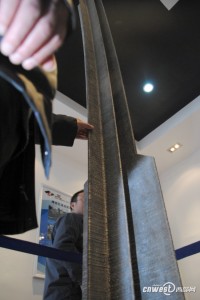 The vibe coming out of Euromold at the end of last year was all about scaling up 3D printers for bigger applications.

Well, one of the biggest 3DP applications I’ve ever seen in metal came to light last week and it is, unsurprisingly, an aerospace part that has been developed at The State Key Laboratory of Solidification Processing, part of the North Western Polytechnical University (NPU) in China. This institute has been conducting extensive research with Laser Additive Manufacturing (LAM) systems since 1995 with a focus on garnering superior mechanical properties of metal parts produced in this way through careful control of the material microstructures. The aim being, to produce production-grade parts, which are capable of meeting the strict aerospace manufacturing regulations and offer key advantages over traditional manufacturing techniques — lighter weight and improved strength being the two main ones.

According to Huang Weidong, Lab Director of NPU: “[The] Modern aerospace industry has stringent requirements, so complex additive manufacturing processes must be developed to ensure that products can achieve the robust performance levels established by traditional manufacturing methods.” 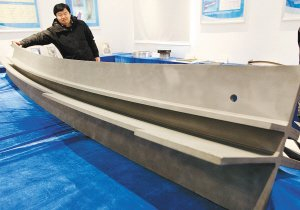 The part in question, which can be seen in the accompanying images, is a 3D printed, titanium central wing spar — it is 3 metres long and the mechanical properties of this part reportedly meet standards achieved by forging. As a result the wing spar is due to be assembled on a Comac C919 passenger-plane in 2014, and subsequently enter commercial service in 2016. The part was produced on LAM systems developed in house at NPU.

This is big news (pun intended) and takes AM to a level that, while predicted, has really only been hypothesized to date on this scale!